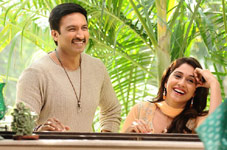 Josh / fullhyd.com
EDITOR RATING
3.5
Performances
Script
Music/Soundtrack
Visuals
5.0
2.0
6.0
6.0
Suggestions
Can watch again
No
Good for kids
No
Good for dates
No
Wait to rent it
Yes
perfunctory (adjective): (of an action) carried out without real interest, feeling, or effort.

This one word summarises Soukhyam (and a lot of Telugu cinema in general). We'll now see how it is all pervading in the film.

Soukhyam's plot is perfunctory: Sreenivasulu alias Srinu (Gopichand) bashes up a goon, and the goon's dad wants him dead. He then falls in love with Sailaja (Regina), and now the girl's dad wants him dead. His own dad is not very comfortable with other other dads wanting his son dead. So Srinu gets past these, um, daddy issues to avoid death while dating his dame. More original yarns are spun by ten-year-olds giving an account of their vanishing pocket money.

Soukhyam's romance is perfunctory: Srinu gathers from his train's reservation chart that a girl is going to sit opposite him. He cleans the seat, sprays perfume on it, and tells another fellow passenger that the coming girl could eventually be the mother of his child. Train rides must be fun for women! It gets worse from there with the girl actually falling in love with Srinu, thereby feeding into the delusions of the millions of already desperate and thoroughly misinformed young men.

Soukhyam's comedy is perfunctory: People in the hall yawned. They stretched limbs. But not even the faintest of sniggers was heard during much of what were supposedly the funny scenes of the film. In what is the bazillionth spoof of Telugu cinema, even "30 Years" Pruthvi comes off as stale. Brahmanandam is severely underused yet again. JP tires. Only Posani manages to summon a few laughs.

Soukhyam's execution is perfunctory: The comedy doesn't make you laugh, the romance doesn't demonstrate conviction, and the narrative doesn't make you care. It's interesting that Soukhyam credits one person for the story (Sridhar Sipani), two for the screenplay (Kona Venkat strikes again - and he's well past his third strike, it's time he stopped playing this game), and another one for direction (A S Ravikumar Chaudhary). From a time where one person handled all of story, screenplay and direction, and still made substantial films, we have arrived at a time where four different people handling three distinct departments can barely make a passable entertainer.

And lastly, even Soukhyam's title is perfunctory: Every one of those twisted compounds in organic chemistry is given a unique name which exactly refers to the nature of the molecule. Our filmmakers often achieve the exact opposite by manufacturing titles which have nothing whatsoever to do the film itself. Soukhyam is as much about comfort as any of the Nandamuri clan films is about feline wildlife. While our films' disregard for physics is legendary, it's time we acknowledged our disdain for organic chemistry as well.

In this unabashed exercise in gratuity, the only departments that just about work are the music and the cinematography. Nothing extraordinary - the film just about looks good and the songs sound pleasant.

The acting by the lead pair hovers around passable. Regina is one of those actresses who seem to have a real personality which is shrouded by the requirement of heroines being dumb and dependent. And Gopichand is completely replaceable - there is nothing that distinguishes him in the film. The only people who do a genuinely great job are the ones in the periphery - the supporting cast. It's the likes of Satya Krishnan, Raghu Babu, Pragati and Mukesh Rishi who throw in earnest performances in the most superfluous of stories and bring about a semblance of validity to these dreary affairs.

A film so generic that international pharmaceuticals might want it banned, Soukhyam is not particularly worth your time or attention. Unless you are very forgiving, of course.
Share. Save. Connect.
Tweet
SOUKHYAM SNAPSHOT 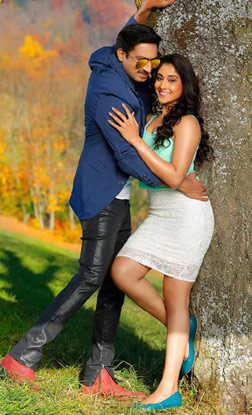 ADVERTISEMENT
This page was tagged for
soukhyam telugu movie
Soukhyam telugu movie
Soukhyam reviews
release date
Gopichand, Regina
Follow @fullhyderabad
Follow fullhyd.com on
About Hyderabad
The Hyderabad Community
Improve fullhyd.com
More
Our Other Local Guides
Our other sites
© Copyright 1999-2009 LRR Technologies (Hyderabad), Pvt Ltd. All rights reserved. fullhyd, fullhyderabad, Welcome To The Neighbourhood are trademarks of LRR Technologies (Hyderabad) Pvt Ltd. The textual, graphic, audio and audiovisual material in this site is protected by copyright law. You may not copy, distribute, or use this material except as necessary for your personal, non-commercial use. Any trademarks are the properties of their respective owners. More on Hyderabad, India. Jobs in Hyderabad.