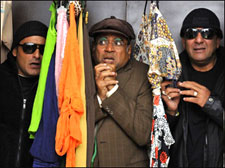 Kakoli Mukherjee / fullhyd.com
EDITOR RATING
4.5
Performances
Script
Music/Soundtrack
Visuals
NA
NA
NA
NA
Suggestions
Can watch again
NA
Good for kids
NA
Good for dates
NA
Wait for OTT
NA
If confusion is a synonym for comedy for you, and gorillas farting figures in your list of funny acts, then No Problem might succeed in drawing a few guffaws out of you. The plot of the film is like a circus let loose, with too many clowns trying hard to be funny, but falling flat on the face because of their juvenile acts. Binding the whole circus together is the threadbare story of a diamond heist gone awry, but the diamonds too lose their shine in the pandemonium set loose by a volley of cranky characters.

To make things easier for you, let us put the disparate bunch into 3 parties:

Party 1: Don Marcos (Suniel Shetty) and his motley crew of sidekicks - a video-shooting maniac who films whatever goes on around him, a current-passing livewire who was once struck by lightning, a gruffy-voiced Ranjeet (the celebrated villain of yesteryears) and a gun-flashing vamp (Neetu Chandra) who likes to kick and jump wearing extremely short dresses. This party steals diamonds for a minister, who locks them up in his own safe instead.

Party 2: Yash (Sanjay Dutt) and Raj (Akshaye Khanna), who are petty thieves, but loot the bank of Zandulal (Paresh Rawal). Zandulal takes it upon himself to recover the lost money when the customers come baying for his blood. After a series of mistaken identities and original jokes like calling a lungi a lehenga, Zandulal manages to trace the duo, and agrees to commit a robbery with them to recover the lost money.

Party 3: Anil Kapoor, a Shikari Shambhu-like cop whose antics to escape from the hoodlums he is supposed to trap put him unduly in the limelight and make him walk away with all the laurels. His life is made miserable by his schizophrenic wife Kajal (Sushmita Sen), who attacks her husband like a shrieking banshee during her fits. Kajal's sister is Sanjana ( Kangna Ranaut), a narcissist bimbette, who falls in love with Raj.

The diamonds fall into the hands of Party 2, and how Party 1 and Party 3 fit themselves in the diamond trail and put an end to the senseless tirade of humorless situations, makes up the rest of the story.

Anees Bazmee, who has given hits like Singh Is King and Welcome earlier, forgets to chart out the method in the madness that is "No Problem". Though the earlier films, too, were woven around a handful of madcap characters, there was a coherent storyline leading them all the way. He has put together all the ingredients that make a comedy here, but forgot to light the fire and brew it to a story that can connect with audiences.

Though the starcast boasts of seasoned actors, very few manage to shine through, crippled by the narrow scope for expressions and the ridiculous dialogues. It's Anil Kapoor who leaves a lasting impression as the cop with 2 bullets in his stomach and as the husband trying to save his life from his knife-brandishing wife. Sanjay Dutt, Akshaye Khanna and Paresh Rawal ham away their lines. Sushmita Sen and Kangana Ranaut try to do justice to whatever little is given to them to do.

The music by Sajid-Wajid, Pritam and Anand Raj Anand is a case of too many cooks spoiling the broth. The songs are utterly forgettable and a big let-down.

At the end, you remain thankful to the gorilla who whisks away the vamp to the forest, and the fish that take a fancy to the dazzling diamonds. Activists crying themselves hoarse to conserve wildlife make more sense now.

See No Problem full details
NO PROBLEM USER REVIEWS
1 - 2 OF 2 COMMENTS
POSITIVE  |  NEGATIVE |  NEWEST  |  OLDEST  |  MOST HELPFUL  |  LEAST HELPFUL
USER RATING
3.0
3 USERS
Performances
Script
Music/Soundtrack
Visuals
5.3
3.0
3.0
4.0
Can watch again - No
Good for kids - No
Good for dates - No
Wait for OTT - No
KrisRay on 22nd Dec 2010, 9:08pm | Permalink
My dear Khan_Mohamad, you need to understand that there are a few crooks (in other words known as businessmen, mafia, babus, politicians) in our country who have accumulated loads of money in wrongful ways. They want to evade paying taxes on them. So, they rope-in Aneez Retard Bazmi, and second grade actors like Akshay Kumar (who yell and pull monkey faces in the name of comedy) and make a lavish movie. They wilfully burn away tens of crores and enter hundreds of crores as spent (in the account books) in making of such crappy movie. Then they go to the taxman and say, they've earned losses (which is too obvious). That way, they spend ten crores & save a 100 crores from taxes.


Pros: nothing
Cons: the director, script, over-acting actors, lousy music, & "Punjabi" chest thumping
khan_Mohamad on 20th Dec 2010, 10:17am | Permalink
dont know where the story is going. had a lot of black money did not know where to put it so made a movie. cheap script. there should be another option as NEVER below.

ADVERTISEMENT
This page was tagged for
no problem movie
No proplem movie
No Problem hindi movie
No Problem reviews
release date
Follow @fullhyderabad
Follow fullhyd.com on
About Hyderabad
The Hyderabad Community
Improve fullhyd.com
More
Our Other Local Guides
Our other sites
© Copyright 1999-2009 LRR Technologies (Hyderabad), Pvt Ltd. All rights reserved. fullhyd, fullhyderabad, Welcome To The Neighbourhood are trademarks of LRR Technologies (Hyderabad) Pvt Ltd. The textual, graphic, audio and audiovisual material in this site is protected by copyright law. You may not copy, distribute, or use this material except as necessary for your personal, non-commercial use. Any trademarks are the properties of their respective owners. More on Hyderabad, India. Jobs in Hyderabad.