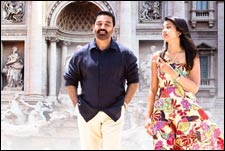 No, it wasn't the savvy vocab in Manmadha Banam that impressed us. That was just the cherry on the cake.

You know those systems abroad - the roads, the local trains, the cleanliness, the cars, the stores - that make NRI cousins tut-tut condescendingly at sights in India and sigh "India will remain like this only"? Manmadha Banam is one of those movies that make you sigh at the lack of Telugu film directors who would even attempt a plot like this, leave alone make it a commercial success.

A plot where people have conversations, not jingoistic monologues laden with insults and threats. A plot where it doesn't rain blood and limbs at regular intervals.

You'll mourn the fact so long as multiplex offerings and films that attempt to break the clutter keep tanking at the box office, in an industry that seems to allow only 2 or 3 formulae to make money because "audiences won't accept" anything else; an industry whose key players exist only because of an illustrious/rich grandfather/father/brother/father-in-law/cousin; an industry whose USP is the exclusion of new talent.

Anyway, back to the film in question. Manmadha Banam is a romantic comedy. It revolves around ex-army Major Bhooshanam (Kamal Haasan), who is a detective employed by the brash Madanagopal (R Madhavan), the distrustful boyfriend of actress Nisha aka Ambu (Trisha). Ambu is on a holiday, and Madanagopal suspects that she's seeing someone on the sly.

The Major has his own past and troubles, and meanwhile, Madanagopal is stuck in a rut of feeding his paranoia to maniacal proportions and turns into a hopeless alcoholic.

While the movie is immensely enjoyable, thanks to the well-conceptualized scenes and the stellar performances all round, it is slow. So slow, in fact, that it feels like 2 movies - pre-interval being a drama and post-interval a comedy. But then, save for its length, a ludicrous terrorist angle, and a few unexplained twists, there are few negatives to Manmadha Banam. The flaws aren't deal breakers by any means.

For one, the film has richly-etched characters that are fun, lifelike, and that are actually behaving within very human limits. It's not often that stories embrace well-rounded personalities that come complete with strengths and quirks. This is a feature complemented by the realistic conversations and dilemmas the protagonists find themselves in.

The humour is understated and smart, and also the kind to make you laugh out loud if you're involved enough with the flick. The creative liberties - a bumbling husband-wife producer couple who stalk Trisha, and the customary all-character confusion towards the end - don't seem painful, since they are not over-the-top.

Kamal Haasan kicks butt as usual. And considering that he gets to do his facial-contortion bit only once in the entire movie, it's pleasant to watch him back in his subtle form. Madhavan doesn't share a lot screen space with the rest of the cast, who are clearly having a blast in Paris, Barcelona and Venice.Trisha has remarkable poise throughout the flick, and Sangeetha is something of a surprise with a bright performance. It was fun to see Usha Uthup in this, by the way.

Devi Sri Prasad stays away from the hip-shakers and all his trademark tunes, and brings in some fluid music - with some melancholic tunes and some lilting, and some quite strange. The slick cinematography makes this a sort of an exotic watch.

In all, that was not tacky, Mr. Haasan and Mr. Ravikumar. Not by a long shot.
Share. Save. Connect.
Tweet
MANMADHA BANAM SNAPSHOT

See Manmadha Banam full details
MANMADHA BANAM USER REVIEWS
1 - 1 OF 1 COMMENTS
POSITIVE  |  NEGATIVE |  NEWEST  |  OLDEST  |  MOST HELPFUL  |  LEAST HELPFUL
USER RATING
7.0
1 USER
Performances
Script
Music/Soundtrack
Visuals
8.0
6.0
8.0
7.0
Can watch again - Yes
Good for kids - Yes
Good for dates - Unsure
Wait for OTT - Unsure
Kishore on 27th Dec 2010, 12:31pm | Permalink
Movie is good to watch. Its a romantic comedy film. Trisha is looking good in this movie. Scoring of songs by DSP is good. Especially the picturisation of the song "Neelakasam..." is too good to watch. Its the best song picturised after the song "Evevo.." in Nachavule movie. All the characters are adequate. Confusion drama runs in 2nd part and continues till the end. Dubbing and dialogues would have been better. Kamal is under utilised and not upto his mark of comedy action. There are some things which does not have logic like why maddy loves sangeetha at the end. Overall, the movie is watchable.

ADVERTISEMENT
This page was tagged for
manamadha.banam.movie.telugu
manmadhu bannam movie songs
manmadha banam Telugu movie
banam movieshindi
Manmadha Banam telugu movie
Follow @fullhyderabad
Follow fullhyd.com on
About Hyderabad
The Hyderabad Community
Improve fullhyd.com
More
Our Other Local Guides
Our other sites
© Copyright 1999-2009 LRR Technologies (Hyderabad), Pvt Ltd. All rights reserved. fullhyd, fullhyderabad, Welcome To The Neighbourhood are trademarks of LRR Technologies (Hyderabad) Pvt Ltd. The textual, graphic, audio and audiovisual material in this site is protected by copyright law. You may not copy, distribute, or use this material except as necessary for your personal, non-commercial use. Any trademarks are the properties of their respective owners. More on Hyderabad, India. Jobs in Hyderabad.