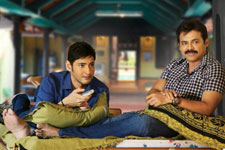 Deepa Garimella / fullhyd.com
EDITOR RATING
6.5
Performances
Script
Music/Soundtrack
Visuals
8.0
6.0
7.5
7.5
Suggestions
Can watch again
No
Good for kids
Yes
Good for dates
Yes
Wait to rent it
Yes
They invite you to lunch, with much love. They lay out the fresh green plantain leaves. They sprinkle water on them, and the plaintain leaves gleam in the sunlight. They serve the food, starting with the papads and the pickles. They serve you a galaxy of steaming hot native delicacies you thought you'd never see after 1992. Everything indeed tastes wonderful. The rice, however, is a little undercooked.

Heaven, sometimes, is one cooker-whistle away. Until then, discontent will haunt you.

Don't get us wrong - Seetamma Vakitlo Sirimalle Chettu is a sweet, charming film; one that does more than bring two superstars together into one frame. At times saccharine, at times discordant, it is, overall a well-done attempt at a genre that we rarely see in these times. Only, it could have been a much better film. And much classier.

The movie follows many Indian family-drama conventions. It has a truckload of characters, and spends about an hour introducing them. Irrespective of their financial status, people have large houses - large enough to accommodate dozens of people at a time, and large enough for young girls to gracefully run around in during wedding preparations.

So in the town of Relangi lives a compulsive smiler and do-gooder (Prakash Raj) who goes by the name "Relangi Mavayya". His family comprises his wife (Jayasudha, with her trademark awesome taste in sarees), his mother (Rohini Hattangadey), his late sister's daughter Seetha (Anjali) and his two sons.

Central to the story are these two brothers, always referred to as Peddodu (Venkatesh) and Chinnodu (Mahesh Babu). The brothers go through a variety of situations that elicit different emotions from them (and about three expressions from Mahesh), and their relationship, the equivalent of the uncooked rice we spoke about earlier, is what is explored here.

Peddodu is this intractable, bullheaded dude who refuses to get a job or stay put in one. He is also not a people-pleaser, and doesn't bow to others. He cannot express his feelings, although inside, he is more emotional than Aamir Khan on Oprah. Seetha has a thing for him, but he never comes close to acknowledging the elephant in the room.

As for Chinnodu, his main claim to fame, according to the film, is that women and girls keep hitting on him. But he's no manchi baaludu. When he is not putting down girls who ogle at him and proposition him, he is ogling at girls in Ameerpet or Inorbit.

Peddodu basically has a grudge against a relative's family, but his grudges are not shared with equal passion by the rest of the family. The two brothers keep having awkward, fidgety, jerky conversations about little issues in life.

On the side are nice incidents showing us how humanity rules above all else. Three weddings, two accidents and 160 minutes later, the director sums up with his moral of the story - something on the lines of how a good family is a good contribution to the world, and how India is a great country.

There are no tragedies in the story, and things cruise smoothly for the most part. Everyone is gentle. Even the bad guys, who simply voice their opinions, aren't very nasty. The saccharine is in control, too. There is a strong coastal-Andhra flavour in the setting, the language and the practices. (But the accents are not completely authentic, and not everyone seems to speak in the same accent)

SVSC's main flaw lies in the depiction of the brothers. Their main grouse with life seems to be not that they are unproductive and unemployed, but that everyone calls them that. You never know what it is that Chinnodu does in Hyderabad. Towards the end of the film, he attends an interview in some hot-shot company (Google? Microsoft?), where the interview panel rejects him because he has a "fake smile" (and because that will deter him from leading a team in future). Peddodu never tries to find a job on his own anyway, and no one really knows why he broods all the time.

While there are many tender moments between the brothers, the chemistry between them is not clear. When they talk and resolve issues, do they have some underlying tension, or are they simply men being emotionally inexpressive men? Mahesh mumbling dialogues doesn't help, and Venkatesh is not given what he is really worth.

The characters who come up tops in this drama are Seetha and the Mavayya. Both these roles are slightly overdone, though. Anjali is extremely pleasant, and does justice to her role as the ebullient small-town traditional girl. However, she has a slight tendency to overact. In any case, she's an actress Telugu filmmakers must not let go of. Prakash Raj is restrained, and a pleasure to watch.

Samantha and Mahesh share great chemistry. The scene in which their eyes first meet is romantic, but their tete-a-tetes later on can induce some groans. Samantha's Geetha is basically a woman with the mind of a toddler, and this is annoying during all those serious family confrontations.

This is more a Mahesh film, and his character gets to go through a wide range of emotions here, unlike Venkatesh, who rarely gets to be truly happy.

Ravi Babu is present for a long time to make you laugh, and Venu Madhav makes a very brief appearance as a Census official. There's no official comedy track, although this is mostly a happy film.

The background score is clearly much better than the music in the songs. The songs aren't great, and a couple of them serve no purpose at all.

Overall, it's a clean, honest film, and you must watch it with family if you've been missing tenderness from our films; but just don't expect a K Viswanath, and you might do fine.
Share. Save. Connect.
Tweet
SEETAMMA VAKITLO SIRIMALLE CHETTU SNAPSHOT 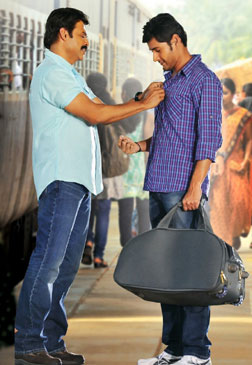 See Seetamma Vakitlo Sirimalle Chettu full details
TOP COMMENT
DurgaPrasad on 1st Feb 2013, 10:06am | Permalink
Nice And Beutifull Family story
6
1
SEETAMMA VAKITLO SIRIMALLE CHETTU USER REVIEWS
1 - 15 OF 16 COMMENTS  |  NEXT  |  LAST
POSITIVE  |  NEGATIVE |  NEWEST  |  OLDEST  |  MOST HELPFUL  |  LEAST HELPFUL
USER RATING
6.3
20 USERS
Performances
Script
Music/Soundtrack
Visuals
NA
NA
NA
NA
Can watch again - NA
Good for kids - NA
Good for dates - NA
Wait to rent it - NA
Portuguese Man-of-War on 21st Nov 2014, 9:30am | Permalink
Nice movie, with some awesome dialogues. I couldn't understand some lines, but that adds to it all. The flirting between Mahesh and Samantha rocks!
RATING
8
RS on 1st Mar 2013, 8:34pm | Permalink
Good movie but could have been better.
Rathodjyothi on 28th Feb 2013, 11:38am | Permalink
Nice and Its a Family story
RATING
6
DurgaPrasad on 1st Feb 2013, 10:06am | Permalink
Nice And Beutifull Family story
Saradhi on 30th Jan 2013, 3:20pm | Permalink
Mugguru addagaadidala story - as said by my colleague.
Sri on 21st Jan 2013, 8:15am | Permalink
Excellent movie. This is one of the very few movies where a common man actually gets connected with the characters. There are no heroes in this movie only characters chin node, peddodu, relangi mamayya, sitamma list goes on and on.this is once in a decade movie don't miss this
prassaddbv1963 on 17th Jan 2013, 4:28pm | Permalink
IT'S A BEAUTIFUL BLOCK BUSTER. SIMPLY SUPERB.
RATING
10
Rahul on 17th Jan 2013, 2:31pm | Permalink
Great movie..slowly addictive
Rakesh on 16th Jan 2013, 5:42pm | Permalink
Dont believe reviews its a worst movies ,you can find nothing in this movie except multistarrer ,Reviewers just take money and write if you dont believe me just go and watch defenitely you will agree this is a waste movie
Bhanu on 15th Jan 2013, 11:11pm | Permalink
This movie is far better than Swarabhishekham... :-)
anonymous critic on 14th Jan 2013, 11:08pm | Permalink
A colossal waste of talent. It could have well been made with Srikanth and Allari Naresh. Goes on to show how script narration can mislead even the best of stars into agreeing to mediocore stuff. This is a bad precedent for a multistarrer movie. PrakashRaj and Anjali are the only saving graces for this movie. Samantha, though cute, was awful in acting and looks like law of averages are about to catchup with her. Mahesh has a much wider range than what has been shown in this movie, his biggest weakness - the smile has taken most of his screentime, which is a pity. Venkatesh will no doubt be embarassed about his character when he looks back. The movie has its moments that can wait till it gets aired on TV.
RATING
5
nelloreodu on 13th Jan 2013, 11:04am | Permalink
my review
http://nelloreodimaata.blogspot.com/2013/01/seethamma-vaakitlo-sirimalle-chettu.html
RATING
5
Mahesh on 12th Jan 2013, 4:37pm | Permalink
I agree svsc is an under cooked dish...except for the soothening title n star cast it has got nothing to offer...family movies thrive on tender emotional moments,which connect the audience n glue them to seats...movies like pedarayudu, alludugaru, kalisundamraa, samsaram oka chedarangam, pachani samsaram etc created wonders becoz of their depiction of beautiful emotions n good story lines...svsc has neither of it...uninteresting story, poor characterisation of both the brothers, no emotional peaks...its a very ordinary movie...thumbs down...
RATING
5
OP on 12th Jan 2013, 4:16am | Permalink
Love this : "Heaven, sometimes, is one cooker-whistle away"
Viewer on 12th Jan 2013, 12:06am | Permalink
Once again, you give away everything in your reviews. Which is why I didn't dare do more than skim it. Reviews need to be succinct, not an epic!
1 - 15 OF 16 COMMENTS  |  NEXT  |  LAST
LEAVE A COMMENT
fullhyd.com has 700,000+ monthly visits. Tell Hyderabad what you feel about Seetamma Vakitlo Sirimalle Chettu!
MORE MOVIES
Latest Reviews
Thimmarusu
Kadhanika
Shukra
Deyyam - 2021
Tempt Raja
more
Vakeel Saab
Wild Dog
Sulthan (Telugu)
Sulthan
Rang De (Telugu)
Saina
Aranya
Sashi
Chaavu Kaburu Challaga
Mosagallu
Contemporary Reviews
Matru Ki Bijlee Ka Mandola
The Last Stand
Broken City
Les Miserables
Inkaar
more
Mumbai Mirror
Shatruvu
Nayak (Telugu)
Dehraadun Diary
Rajdhani Express
The Impossible
Table No. 21
Sevakudu
Jack Reacher
Random Reviews
Pyaasa
Charlies Angels (Hindi)
Fun2shh
The Lord Of The Rings: The F...
Meghamala - O Pellam Gola
more
Allari Bullodu
Miami Vice
Made Of Honour
2012 (Hindi)
Yamla Pagla Deewana
The Hunger Games: Catching F...
Happy New Year
Dilwale (Hindi)
Dunkirk
Bumblebee (Hindi)
SEARCH MOVIES
Dissatisfied with the results? Report a problem or error, or add a listing.
ADVERTISEMENT
SHOUTBOX!
{{todo.name}}
{{todo.date}}
[
ip{{todo.ip}}
]
{{ todo.summary }}... expand »
{{ todo.text }} « collapse
First  |  Prev  |   1   2  3  {{current_page-1}}  {{current_page}}  {{current_page+1}}  {{last_page-2}}  {{last_page-1}}  {{last_page}}   |  Next  |  Last
{{todos[0].name}}

ADVERTISEMENT
This page was tagged for
Seetamma Vakitlo Sirimalle Chettu telugu movie
Seetamma Vakitlo Sirimalle Chettu reviews
release date
Venkatesh, Mahesh Babu
theatres list
Follow @fullhyderabad
Follow fullhyd.com on
About Hyderabad
The Hyderabad Community
Improve fullhyd.com
More
Our Other Local Guides
Our other sites
© Copyright 1999-2009 LRR Technologies (Hyderabad), Pvt Ltd. All rights reserved. fullhyd, fullhyderabad, Welcome To The Neighbourhood are trademarks of LRR Technologies (Hyderabad) Pvt Ltd. The textual, graphic, audio and audiovisual material in this site is protected by copyright law. You may not copy, distribute, or use this material except as necessary for your personal, non-commercial use. Any trademarks are the properties of their respective owners. More on Hyderabad, India. Jobs in Hyderabad.