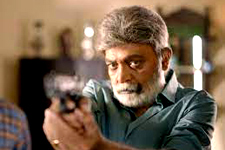 Sai Tulasi Neppali / fullhyd.com
EDITOR RATING
5.0
Performances
Script
Music/Soundtrack
Visuals
6.0
6.0
7.0
8.0
Suggestions
Can watch again
No
Good for kids
No
Good for dates
No
Wait for OTT
Yes
Of all the cinematic tropes out there, the only one I'd never tire of watching over and over is that of the detective-led crime thriller. You know the one I'm talking about - a kooky but brilliant Sherlock-type solves crimes with as much ease as he ties his shoelaces. A movie experience that keeps us on the edges of our seats.

Shekar tries to be that, and is almost that in the first-half, but by the climax, it most definitely isn't. The movie is the Telugu remake of the Malayalam film Joseph, but with a significant departure in the main character's backstory.

The protagonist, Shekar, played by Dr. Rajasekhar, is a chain-smoking, whiskey-chugging ex-cop with deduction skills bar none. Even after he has quit the police force, he is still the one they call if a murder needs solving. But alongside his genius is a deep sadness. His house is filled with remnants of a past life - a loving wife and a joyful daughter. Now alone, he smokes weed, his "rocket to the past", to revisit his memories of them.

Slowly - and with the dragging pace of a Spanish tele-novella - the many reasons for his grief are revealed. A brutally murdered ex-lover. A divorce. A dead child. Poor Shekar can't seem to catch a break. Then when his ex-wife, the only family he has left, meets with a fatal road accident, he begins to suspect something is amiss. Are these accidents or murders And thus (as the interval break reads), the investigation begins.

The first-half of the movie brims with potential. Shekar's salt-and-pepper beard, greenish-brown eyes, and fondness for dressing in crisp shirts and white lungis - all give him an indie silver fox vibe that's quite memorable. In his intro scene, he stubs out a cigarette with his bare feet, sweeps up the remnants with a broom, and makes himself a strong coffee before heading out on his Bullet to go solve a crime. Like I said - it has its moments.

As Shekar's backstory unfolds, you sympathise with him. But his sad saga is explored to a fault, gobbling up precious screen time. No other characters get their due. You don't learn about why Shekar's four cop buddies, who each seem bloated by their own sadness, hang around him all the time. Even his daughter, ex-wife and his lover are thinly-written characters. You only see them through his teary eyes, and it quickly gets tiresome. The screenplay jumps between different periods of Shekar's life in confusing ways.

But it is the second half of the movie that is criminally paced. Instead of being about a thrilling investigation and take-down, the story flails about awkwardly, and by the climax, it lands soft and limp as a wet rag. If only Shekar spent less time brooding and more time deploying his detective skills. The one and only "smart" trick that is used to catch the goons is phone-tracking technology. Even this is laughably unconvincing.

Dr. Rajasekhar never gets to use his signature expression - the teeth-gritting, death stare that earned him the moniker "Angry Star". Here, his eyes are instead reserved for melancholia. Even in scenes that call for flair, like when he catches a murderer, he is stiff and severe. Actress Muskaan Khubchandani who plays Shekar's ex-lover is the only joyous (although brief) presence in the movie.

Shekar had all the promise of a good crime story, but it slips and falls midway through, and never quite gets back up on its feet. Beginning as a thriller but ending as a preachy drama, it flatters to deceive, and leaves audiences of the genre quite dissatisfied. 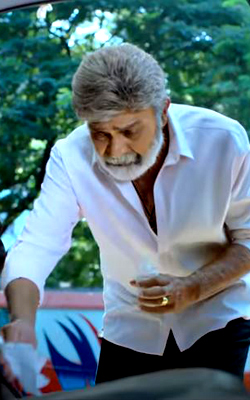 ADVERTISEMENT
This page was tagged for
Shekar telugu movie
Shekar reviews
release date
Dr. Rajasekhar, Athmeeya Rajan
theatres list
Follow @fullhyderabad
Follow fullhyd.com on
About Hyderabad
The Hyderabad Community
Improve fullhyd.com
More
Our Other Local Guides
Our other sites
© Copyright 1999-2009 LRR Technologies (Hyderabad), Pvt Ltd. All rights reserved. fullhyd, fullhyderabad, Welcome To The Neighbourhood are trademarks of LRR Technologies (Hyderabad) Pvt Ltd. The textual, graphic, audio and audiovisual material in this site is protected by copyright law. You may not copy, distribute, or use this material except as necessary for your personal, non-commercial use. Any trademarks are the properties of their respective owners. More on Hyderabad, India. Jobs in Hyderabad.