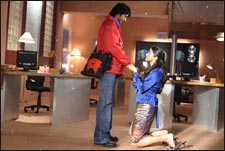 Deepa Garimella / fullhyd.com
EDITOR RATING
4.0
Performances
Script
Music/Soundtrack
Visuals
6.0
5.0
3.0
4.0
Suggestions
Can watch again
No
Good for kids
No
Good for dates
Yes
Wait to rent it
Yes
Hello, adapted from Chetan Bhagat's One Night @ A Call Center, is the story of one gloomy, rainy night in the lives of a motley team of call-centre agents. Apart from describing their lives, the book also carried some arguments - rather, judgements - on consumerism, and the call-centre culture that makes bright, educated Indian youth troubleshoot dumb machines of even dumber Americans - a humiliating subjugation that India, ironically, mistakes for intellectual empowerment.

That would have made for a thought-provoking message a few years ago. But certainly not when delayed, and if delivered through a few clichÃ©d portrayals of cerebrally challenged Americans, or a couple of lines by an inebriated Sohail Khan, or in a 2-minute motivational speech by Sharman Joshi, in an Atul Agnihotri-directed adaptation, whose idea of a brooding scene is to dim the lights.

Hello opens with Salman Khan (playing himself) in an airport lounge, being narrated a story, on the condition that he must make a film out of it. So starts the tale of that strange night at the call centre, when God Himself called up.

Resourceful, soft-spoken Shyam (Saif-sound-alike Sharman Joshi) and smart, gutsy Priyanka (a visibly embarrassed cleavage-baring Gul Panag) were seeing each other but broke up, and Priyanka has now agreed to an arranged marriage. Happy-go-lucky stud-boy Vroom (Sohail Khan) is in love with a fraught Isha (Isha Koppikar - and whoever imagined that she would need to lose weight?) who's desperate to be a model.

The stressed-out Radhika (Amrita Arora) who struggles to balance life and work, and the lonely Military Uncle (Sharad Saxena) who yearns to be with his son's family in the US, are the others in the team. Also in the picture is the caricaturized America-worshipping, back-stabbing clown of a boss, Bakshi (Dalip Tahil).

And on that dismal night, when nothing's going right in anyone's life, God's call makes everyone look at their lives differently, and orchestrates them to a filmily feel-good happy ending. Or so was intended.

At best, Hello is half-way there in capturing the emotional world of its characters. If that is what it had stuck to sincerely, even after that call from God, it would have been, not a Corporate or a Life In ...A Metro, but at least a more believable film.

Low production values spoil the show. For one thing, it is a pitifully lonesome film. The lead group mostly exists in cold, desolate surroundings - their office, cafeteria, and even the pub where they all have a drink together, are all weakly lit and oddly uninhabited by other human beings.

If that was an attempt to focus untainted attention on the protagonists, it is pretty unconvincing. All it makes you wonder is, was there no money to hire any extras? Why, even the 'floor' of the call centre suspiciously looks like someone's drawing room fitted with six desks, a few computers and telephones.

Performance-wise, Sharman Joshi is the proverbial breath of fresh air in this musty offering, occasionally helped by Gul Panag. Sharad Saxena, whose personality we are given only a whiff of, is terribly underutilized. Sohail Khan is the funny man around, with his essentially one-quip-per-line character and the customary men's-urinal joke. Sajid-Wajid's music is gratingly annoying, and of the three songs in the film, one is bearable only because you get to see Salman Khan dance.

Only die-hard fans of Salman and his entire family (including Salman's sister-in-law's sister, Amrita Arora) would have a meaningful time watching Hello. As for die-hard fans of Chetan Bhagat or his book, the film is either hilarious or painful.
Share. Save. Connect.
Tweet
HELLO (HINDI) SNAPSHOT

ADVERTISEMENT
This page was tagged for
hello film hindi
Hello (Hindi) hindi movie
Hello (Hindi) reviews
release date
Salman Khan, Katrina Kaif
Follow @fullhyderabad
Follow fullhyd.com on
About Hyderabad
The Hyderabad Community
Improve fullhyd.com
More
Our Other Local Guides
Our other sites
© Copyright 1999-2009 LRR Technologies (Hyderabad), Pvt Ltd. All rights reserved. fullhyd, fullhyderabad, Welcome To The Neighbourhood are trademarks of LRR Technologies (Hyderabad) Pvt Ltd. The textual, graphic, audio and audiovisual material in this site is protected by copyright law. You may not copy, distribute, or use this material except as necessary for your personal, non-commercial use. Any trademarks are the properties of their respective owners. More on Hyderabad, India. Jobs in Hyderabad.