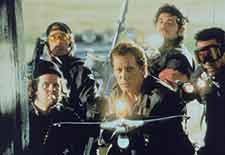 Arpan Panicker / fullhyd.com
EDITOR RATING
7.0
Performances
Script
Music/Soundtrack
Visuals
NA
NA
NA
NA
Suggestions
Can watch again
NA
Good for kids
NA
Good for dates
NA
Wait for OTT
NA
This movie sure is a surprise. With a name like Bhayaanak Raat, you walk into the theater expecting the worst. But this is a dubbed version of the English film Vampires that was recently released. With a decent cast, nice background music and slick effects, this one is worth the money you spend on the ticket, and on the popcorn, too. The only flaw is the obvious one... the Hindi dubbing!
This is a new age vampire flick that aims at shattering the myths related to vampires... weird, when you consider the fact that vampires themselves are a myth. This movie has vampires that are not scared at crosses or any other sacred things... actually, the main vampire is in search of a cross that would render him invulnerable to sunlight. The only way to kill the vampires is to drive a stake through their hearts and drag them out into the sunlight. A tough proposition, considering that the bloodthirsty vampires are always ready for a bite.
But Jack Crow's (James Woods) group specializes in giving vampires a sunburn; one bad enough to reduce them to ashes. But after one such exploit where they purge a derelict abandoned house clean of vampires, things go bad. The master vampire Valek, whom they couldn't find, avenges the death of his group, wiping out almost Crow's entire group. Only Montaya (Daniel Baldwin) and Crow himself escape.

They find a hooker, Christine, whom Valek bit before escaping. They use Christine for her telepathic contact with Valek. But Christine herself is slowly turning into a vampire. And from here on, the pace gets faster and faster, culminating in a dramatic climax where our vampire slayers confront Valek even as he starts the procedure that will remove his inherent photophobia. The climax is in keeping with the pace that the movie sets.

The movie has several assets. One is James Woods himself - he's perfected the art of delivering deadpan one-liners. The only problem is that the guy who did his Hindi dubbing botches up the job. And with dialogues that are totally hopeless, with a generous dose of MCs and BCs to replace the F-words that sprinkle the English version at highly regular intervals, you can't help but wonder how the movie ever got through the censors. A good movie to help pass time, but you'd better wait till the English original is released and then watch it. Then you won't miss the petit nuances, and enjoy the movie better.
Share. Save. Connect.
Tweet
BHAYANAK RAAT SNAPSHOT

ADVERTISEMENT
This page was tagged for
bhayanak raatein english vampire
Bhayanak Raatein hollywood hindi dubbed movie.com
bhAyanak hindi movie
Bhayanak ratain hindi dabed download
Bhayanak Hollywood movies Hindi
Follow @fullhyderabad
Follow fullhyd.com on
About Hyderabad
The Hyderabad Community
Improve fullhyd.com
More
Our Other Local Guides
Our other sites
© Copyright 1999-2009 LRR Technologies (Hyderabad), Pvt Ltd. All rights reserved. fullhyd, fullhyderabad, Welcome To The Neighbourhood are trademarks of LRR Technologies (Hyderabad) Pvt Ltd. The textual, graphic, audio and audiovisual material in this site is protected by copyright law. You may not copy, distribute, or use this material except as necessary for your personal, non-commercial use. Any trademarks are the properties of their respective owners. More on Hyderabad, India. Jobs in Hyderabad.