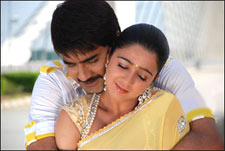 Deepa Garimella / fullhyd.com
EDITOR RATING
4.0
Performances
Script
Music/Soundtrack
Visuals
8.0
5.0
4.0
7.0
Suggestions
Can watch again
No
Good for kids
No
Good for dates
Yes
Wait to rent it
Yes
One for the masses, one for the home, one for your little boy who came along for fun. That was how "family dramas" in the '90s succeeded - you had a hero, a voluptuous heroine (maybe two), melodrama, double entendre dialogues and even some cleavage, but it was still a family story with comedy, and there were kids, too - by pleasing just about everyone.

Kausalya Supraja Rama wants to be that kind of family drama, albeit slightly toned down. Sriram (Srikanth), the brightest and most sincere employee of Ranga Rao (Kota Srinivasa Rao), is in dire need of a huge loan, for which he cannot afford to displease his boss at the moment. So when Ranga Rao goes abroad and asks him to take care of his empty house and his dog until he is back, Sriram grudgingly obliges.

What he hadn't bargained for are the people he ends up sharing the house with, including Rao's high-and-mighty daughter Supraja (Charmy), his absent-minded son (Siva Reddy), and a few nutty comics who find an excuse who move in there till Rao returns.

Sriram sets right a few dysfunctional relationships, and very soon, has Supraja swooning over him. The boss returns, he is thrilled with the state of affairs, Sriram almost gets the money, and all is well until someone alleges that Sriram is a much-married man. How does he explain things? Rather, why does he not?

The story is passably average, but is propped up by healthy production values, good performances and sharp dialogue. Srikanth could probably sleep-walk his way through roles like these, and he has the added quality of not having aged much. Charmy is allright in the stereotypical heroine's role that requires her to chiefly change over from mini-skirts in the first half to demure salwars in the second. Gowri Munjal gets to be in a coma for the entire film, save for a song towards the end, so that's not much to do for her.

With a full-house of comedians, the movie is quite funny, but the laughs don't come as loud. And then there are those cheesy jokes that are good only for those who don't usually cringe at cheesy jokes. The songs are quite nastily jarring, except for the cute and chirpy Kousalya Nacchave.

KSR is a so-so way to spend two and a half hours, but not exactly the best way to do it.
Share. Save. Connect.
Tweet
KAUSALYA SUPRAJA RAMA SNAPSHOT

ADVERTISEMENT
This page was tagged for
Kausalya Supraja Rama telugu movie
Kausalya Supraja Rama reviews
release date
Srikanth, Charmy
theatres list
Follow @fullhyderabad
Follow fullhyd.com on
About Hyderabad
The Hyderabad Community
Improve fullhyd.com
More
Our Other Local Guides
Our other sites
© Copyright 1999-2009 LRR Technologies (Hyderabad), Pvt Ltd. All rights reserved. fullhyd, fullhyderabad, Welcome To The Neighbourhood are trademarks of LRR Technologies (Hyderabad) Pvt Ltd. The textual, graphic, audio and audiovisual material in this site is protected by copyright law. You may not copy, distribute, or use this material except as necessary for your personal, non-commercial use. Any trademarks are the properties of their respective owners. More on Hyderabad, India. Jobs in Hyderabad.