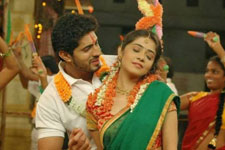 Kritika Deval / fullhyd.com
EDITOR RATING
4.0
Performances
Script
Music/Soundtrack
Visuals
6.0
4.0
5.0
7.0
Suggestions
Can watch again
No
Good for kids
No
Good for dates
No
Wait for OTT
Yes
As if the title weren't ominous enough to strike fear into the hearts of the most stalwart of Telugu filmgoers, Mana Kurralle is appended by a tagline - "The Next Generation" - that further forebodes impending inanity. As must be obvious by now, every time Tollywood churns out a film about that mysteriously buffleheaded group known as "the youth", it invariably tends to be a paean to backwards time-travel - i. e. about how much better young people could do if only they went back to the ways of the hunter-gatherers.

Mana Kurralle, unfortunately, is not the exception. Latchu (Arvind Krishna), Suri (Kalyan), Appu (Venkat) and Sarada (Rachana Malhotra) are childhood friends who hail from a halcyon village where even the manure smells of roses. Adulthood beckons, however, as does the lure of IT money, and so the four head out to the Big City to find their fortunes. But then, anything that "The Next Generation" does to get far away from the past must have Grave Consequences, and all faults of personality must be laid at the door of the passage of time. And thus the IT boom goes bust and those of the foursome most struck by the city lights are brought the lowest.

Meanwhile, the rose-scented manure in their halcyon village starts to get affected by the rancid stench of lucre as Evil Persons try to grab the land to turn it into an SEZ (Special Economic Zone), and we all know there is nothing more evil than corporate acronyms (AWOL and FEAR, for instance, have been known to bring on nightmares, while IMHO has the effect of turning people violent).

The fault with Mana Kurralle does not lie with the fact that it touches upon the thorny matter of those getting trampled upon by India's largely quantitative development, but with its insistence that all desire for upward mobility must come to a bad end. Things start off well enough, with fun and games and romance angles that are stuck in their just because. And then interval happens, and pretty soon you'll be swearing to give up on your covetous ways just so the infernal preaching stops.

Arvind Krishna shows commendable presence and ease as an actor, adapting quickly to shifting milieus, the nonsensicality of his character's skewed viewpoints notwithstanding. Rao Ramesh, as the village opinion leader (for the lack of a better description), and seemingly the village's sole bulwark against corporate acquisitiveness, is as moving and powerful a performer as ever, quickly replacing Kota Srinivas Rao and Prakash Raj for roles requiring gravity and flexibility. Rachana Malhotra is pretty but also pretty superfluous, although the fault lies with an industry that knows only two ways to portray women - as window dressing, or as "heroes" in skirts if the movie has been stamped "women-oriented" (Tollywood loves its labels). Krishnudu is a hoot while Venu Madhav does his usual shtick. The rest of the cast do their jobs.

The dialogue is decent, and if the characters weren't so wrong-headed, you could find yourself enjoying it more often. The screenplay suffers from all the melodrama, with the second half seeming far longer than it should. The editing is extremely choppy, perhaps due to how long the movie has been in production. While the cinematography is quite pretty, turning commonplace locations into sights to behold, and giving sartorial value to lacklustre scenarios, the music is mediocre, with awkward placement of songs not helping matters.

In all, Mana Kurralle is one of those "message-oriented" movies in which the fervour of the delivery of said message is confused with its efficacy. The meager amount of entertainment it provides does not make up for the tedium it induces. Catch this one on TV, if at all.
Share. Save. Connect.
Tweet
MANA KURRALLE SNAPSHOT 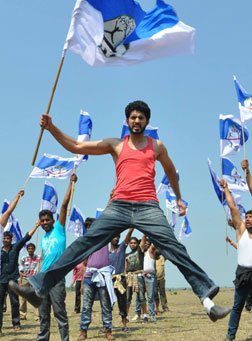 ADVERTISEMENT
This page was tagged for
Mana Kurralle telugu movie
Mana Kurralle reviews
release date
Arvind Krishna, Rachana Malhotra
theatres list
Follow @fullhyderabad
Follow fullhyd.com on
About Hyderabad
The Hyderabad Community
Improve fullhyd.com
More
Our Other Local Guides
Our other sites
© Copyright 1999-2009 LRR Technologies (Hyderabad), Pvt Ltd. All rights reserved. fullhyd, fullhyderabad, Welcome To The Neighbourhood are trademarks of LRR Technologies (Hyderabad) Pvt Ltd. The textual, graphic, audio and audiovisual material in this site is protected by copyright law. You may not copy, distribute, or use this material except as necessary for your personal, non-commercial use. Any trademarks are the properties of their respective owners. More on Hyderabad, India. Jobs in Hyderabad.