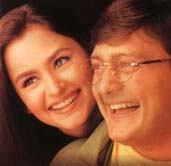 Pratima Agnihotri / fullhyd.com
EDITOR RATING
8.0
Performances
Script
Music/Soundtrack
Visuals
NA
NA
NA
NA
Suggestions
Can watch again
NA
Good for kids
NA
Good for dates
NA
Wait for OTT
NA
Soumya Nadkarni (Nisha Bains) is the stuff dreams are made of. The only child of her indulgent parents, she has the best of everything. She is brilliant: a topper throughout, talented, live wire and pretty. She is her papa's darling and mama's pet. And for her boyfriend Ninad (Sunil Barve), she is life itself. She is about to appear for her HSC. Life is one big song for this fan of Sanjay Dutt.

It turns into a nightmarish cacophony in no time. The Nadkarnis' world is shattered when Soumya tests HIV positive. The blood transfusion she underwent during her appendoctomy is the culprit. The loving parents try to hide the harsh Nidaan (the Hindi word for diagnosis) from her for a long time. Nevertheless, she soon comes to know.

How the family, with sincere support from a mature Ninad, copes with the tragedy and makes her last few days joyful, forms the touching tale, made quite vivid by the genuinely felt depiction of the agony of the loving parents when their beloved child is in pain.

So the film is indeed what all these celebrities have been telling us it is. It is effective entertainment on one level. The actors might not be stars but they sure live their roles. The story is a straight narration, making it poignant and heart wrenching. Nowhere is there an attempt to either sensationalise or trivialise the grave issue that the film handles. Rahul Ranade's music and Vijay Arora's cinematography deserve a special mention.

As for the message it conveys, and the way it gets conveyed, the makers sure deserve our congratulations. The propaganda never jars. The film shows that an upper middle class, innocent girl could be an AIDS victim. So AIDS is not allowed to remain something out there, in jhopadpattis, not our bother. The film thus makes a serious case for taking the dreaded disease seriously.

Similarly, the why's and what's of the disease form part of the narrative, but so effortlessly are they woven in to the story that they do not sound like preaching. The film, moreover, makes a strong case for sensitivity for the unfortunate victims.

In a country where brides are for burning, it is quite heartwarming to see a film advocating the marriage of an AIDS infected girl for the peace of her mind. Quite some consolation to see that in our post-everything world, there exist decent souls.

Such subtle and responsible use of media is the need of the hour in our problem-infested polity. Yet the film is not syrupy sweet. Reality intrudes in the form of callous friends and business-conscious doctors. In brief, a film worth watching.

As it is tax-free, it will cost you as much as a coke but could teach you a lot. So how about foregoing the fizz for a well-told fable of our times? You would sure not regret the Nidaan! Better never than late, right?

ADVERTISEMENT
This page was tagged for
Nidaan hindi movie
Nidaan reviews
release date
Shivaji Satham, Reema Lagoo
theatres list
Follow @fullhyderabad
Follow fullhyd.com on
About Hyderabad
The Hyderabad Community
Improve fullhyd.com
More
Our Other Local Guides
Our other sites
© Copyright 1999-2009 LRR Technologies (Hyderabad), Pvt Ltd. All rights reserved. fullhyd, fullhyderabad, Welcome To The Neighbourhood are trademarks of LRR Technologies (Hyderabad) Pvt Ltd. The textual, graphic, audio and audiovisual material in this site is protected by copyright law. You may not copy, distribute, or use this material except as necessary for your personal, non-commercial use. Any trademarks are the properties of their respective owners. More on Hyderabad, India. Jobs in Hyderabad.