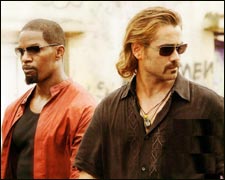 Samrat Sharma / fullhyd.com
EDITOR RATING
5.0
Performances
Script
Music/Soundtrack
Visuals
NA
NA
NA
NA
Suggestions
Can watch again
NA
Good for kids
NA
Good for dates
NA
Wait for OTT
NA
I'm a big Michael Mann fan. Heat,Collateral, Ali - he has always managed to tweak the grit and glory formula ever so slightly and deliver a studio movie while being the exact opposite in substance. His personal style and vision have managed to make what would have been mundane explosion fests into intense character studies, giving the onscreen action relevance and much-needed emotional punch.

Look at the depths he has plunged to. Mistaking his style for what works instead of what his style packages, he delivers an almost no-substance all-style re-imagining of the '80s TV show that he executive-produced. Storytelling and craftsmanship are eschewed for cool suits and gorgeous vistas, and suddenly I am left thinking - this is not the Mann I once knew.

Miami Vice is a gorgeous film. It has a brilliant sense of the atmospheric, in every sense of the word, and every mood is accentuated with the intense camera work. Much like his 2004 gangster outing, Collateral, this film is largely shot in digital video, giving a raw, edgy feel to it. But unlike Collateral, the script and character development are sorely lacking.

What passes for a plot in this film is not only as old as grandma's mittens, it is equally ridden with holes. Colin Farrell and Jamie Foxx replace Don Johnson and Philip Michael Thomas as James "Sonny" Crockett and Ricardo "Rico" Tubbs, two undercover policemen with the vice unit. Wen a drug bust messes up on itself, our two mavericks are called in to bring in a drug lord. They must pose as transportation experts and carry out missions before they can earn the drug lord's trust.

Rico lives with his girlfriend and fellow vice officer Trudy (Naomie Harris), and Sonny tries to seduce the drug lord's paramour Isabella (Gong Li), thus making room for needless shower sequence numbers one and two respectively. Somewhere along the way, Mann forgets all about the drug lord, and the whole film ends in a bloody shoot-out and an awkward moment between Isabella and Sonny.

That's it, really. In between there are some expensive mansions, villas and apartments, some Third World slums, one or two intense stakeouts that never amount to anything, and lots of stunning footage. Characters speak in low whispers, and you'll be spending a lot of time straining to hear what they have to say, but the beautiful shots more than make up for any lack of exposition or story - or so Michael Mann would have you believe.

Deep focused shots interspersed with high ISO grainy visuals are the standard here, interspersed with some character closeups and some handheld madness. AT least that much he has down pat. What he doesn't, apart from the plot, is handling his actors. There are inconsistent performances across the board. There is some embarrassingly bad acting by Farrell, and there are some bored expressions from Li. Only Foxx has some credibility and presence, and lends his role some much needed respect.

You know something is wrong when it's an action film and there is no action for the first hour or so. All you get is a lot of well-dressed people posing in cool poses and staring at each other. Hard. I kept thinking that it will get better, but it never did. This is a wafer thin plot stretched for the entire length of the film, with no credible character arcs, plot or action. It looks fantastic, has one - count that - one good shootout, and that is all you get for the price of your ticket.

Let's face it - Mann is tired and has had enough for a while. This is definitely not his day. He has dropped his good ideas, and clung on to the style quotient that his films raised. This is not a film about his much loved TV series. This is a tired director trying to posture emptily and get us to applaud. I'm sorry, Mr. Mann, my hands are in my pockets.
Share. Save. Connect.
Tweet
MIAMI VICE SNAPSHOT

ADVERTISEMENT
This page was tagged for
Miami Vice english movie
Miami Vice reviews
release date
Colin Farrell, Jamie Foxx
theatres list
Follow @fullhyderabad
Follow fullhyd.com on
About Hyderabad
The Hyderabad Community
Improve fullhyd.com
More
Our Other Local Guides
Our other sites
© Copyright 1999-2009 LRR Technologies (Hyderabad), Pvt Ltd. All rights reserved. fullhyd, fullhyderabad, Welcome To The Neighbourhood are trademarks of LRR Technologies (Hyderabad) Pvt Ltd. The textual, graphic, audio and audiovisual material in this site is protected by copyright law. You may not copy, distribute, or use this material except as necessary for your personal, non-commercial use. Any trademarks are the properties of their respective owners. More on Hyderabad, India. Jobs in Hyderabad.