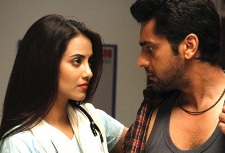 Nupur Barua / fullhyd.com
EDITOR RATING
5.0
Performances
Script
Music/Soundtrack
Visuals
6.0
5.0
6.0
7.0
Suggestions
Can watch again
Yes
Good for kids
No
Good for dates
No
Wait to rent it
Yes
If Bollywood is to be believed, then the worst category of people live in Western UP (think Saheb Biwi Aur Gangster, in recent times). The notion becomes more credible when the director of a movie based on that region is somebody who grew up there. So if Maqbool Khan wants to portray the land of his childhood in a particular light, we just have to bow down to his superior knowledge, and believe what he tries to say.

Apparently inspired by a true story, Lanka is based on the dynamics between a villainous man and his protege/brother. So there is Jaswant Sisodia, aka JS, aka Bhaisaab (Manoj Bajpai), a powerful man, who literally runs the small town of Bijnor.

He is not a nice person, to say the least, and he thrives on trampling the weak. He is Raavan, in other words, and Bijnor is his Lanka.

In the midst of all the underhand dealings that JS has, he finds the time to fall in lust. With a doctor, no less. And what Bhaisaab wants, Bhaisaab gets.

So Anju (Tia Bajpai), whose father (Yatin Karyekar) is also a doctor, becomes Bhaisaab's mistress before you can say "Sita". Of course, she hates it, and of course, JS threatens her father with dire consequences if he dares to protest, but she does nothing about it but shed gallons of tears. An educated young woman who does not put up a fight? Only in Western UP.

Much like Sita, Anju hopes that her saviour will land up someday and rescue her from this hellhole. Only, there is no Ram, but the underestimated Vibhishan, in the form of Bhaisaab's younger brother and protege, the man without a name (Arjan Bajwa). He is back in Bijnor to lend a helping hand to his mentor, but he immediately falls in love with Anju and decides that everything that he has stood for, so far, was morally a crime.

The helpless Anju latches on to him like a leech, all the while pretending not to, because he is her only hope. Again, why she does not even try to escape on her own is puzzling. Bhaisaab, being the Indian answer to Uday Hussein (refer to The Devil's Double), is determined to destroy those who betray him, and goes on a rampage. In the meantime, several sub-plots, such as Bhaisaab's relationship with a corrupt (of course) cop (Yashpal Sharma), continue to play in the background.

Lanka has nothing extraordinarily new to offer. However, Maqbool Khan has made an effort to not be too conventional in his style of film-making. Granted this is what seems to be a doomed love story, but he does not go over the top with the love angle. A few glances and stares, sometimes accompanied by rather maudlin dialogues between the star-crossed lovers, are all you will get in the movie.

Khan has stuck to his basic premise, and that is the relationship between the nameless man and JS. Their camaraderie goes beyond emotion and love, and the only time JS looks like a human being is when he is with his brother. Such intense dynamics can only lead to an irreversible fallout, which is what happens in the movie, but you can feel the pain of both the characters as they realise that things are no longer the same between them. You almost hate the woman responsible for the rift - history (written by men) has always blamed a woman for all wars (Iliad is the prime example).

Given the character Arjan Bajwa plays, there is one niggling thought - if he is such a hero (clean heart, ethical), then would he have anyway defied JS at some point, woman or no woman? While the movie begins with Anju's perspective, it becomes all about the nameless man and his inner struggles to oppose his brother (the lack of a name is a clever little reference and tribute to Clint Eastwood's character in the Sergio Leone spaghetti Westerns - he may be a mercenary, but he has honour).

The problem with what seems to be an interesting story is the execution of the script. Everything just happens too quickly, and the audience is not given the time to associate or understand the characters. There are just too many things happening for you to focus on one aspect of the story, and the speed at which these things carry on will most certainly boggle your mind. The item song featuring Shveta Salve, although not too great, is a welcome relief.

JS, for all his shades of grey, is a rather flat character. He booms and kills, and is the quintessential villain. Manoj Bajpai hams a bit to be a more effective JS, no doubt, but he is the real hero in the film. In a recent interview, the actor stated that he does not play "villainous" roles, but those of human beings who have several facets to their personality (like Raavan's 10 heads). To give him credit, he has tried to humanise the terrible Jaswant Sisodia.

Arjan Bajwa is an urban chap, and that is proved the minute he opens his mouth. The director has very subtly given both him and Tia Bajpai minimum dialogues, but even then, their lack of command over the language is glaringly obvious. As far as the acting is concerned, Arjan is sincere and tries his best, but Tia can get on to your nerves. She has 2 expressions throughout the movie, and her depiction of a wronged woman is so wrong.

The movie is about these 3 characters, so the supporting cast (all of them talented artistes) is largely wasted.

The music is bearably decent. Visually, some of the sequences, as mentioned earlier, will take your breath away. Unlike other movies based on this region, the UP-ness is underplayed, and foul language, a mandatory side effect, is almost non-existent. Inconsistency in the language, however, becomes prominent.

Lanka can be watched, if you go in with low expectations, and are prepared to tolerate Manoj Bajpai's loud acting.
Share. Save. Connect.
Tweet
LANKA SNAPSHOT

ADVERTISEMENT
This page was tagged for
Lanka hindi movie
Lanka reviews
release date
Manoj Bajpai, Arjan Bajwa
theatres list
Follow @fullhyderabad
Follow fullhyd.com on
About Hyderabad
The Hyderabad Community
Improve fullhyd.com
More
Our Other Local Guides
Our other sites
© Copyright 1999-2009 LRR Technologies (Hyderabad), Pvt Ltd. All rights reserved. fullhyd, fullhyderabad, Welcome To The Neighbourhood are trademarks of LRR Technologies (Hyderabad) Pvt Ltd. The textual, graphic, audio and audiovisual material in this site is protected by copyright law. You may not copy, distribute, or use this material except as necessary for your personal, non-commercial use. Any trademarks are the properties of their respective owners. More on Hyderabad, India. Jobs in Hyderabad.