Our Brand Is Crisis Review 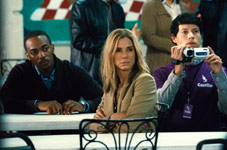 Josh / fullhyd.com
EDITOR RATING
6.5
Performances
Script
Music/Soundtrack
Visuals
9.0
6.0
6.0
7.0
Suggestions
Can watch again
Yes
Good for kids
No
Good for dates
Yes
Wait for OTT
No
As political campaign strategist Jane Bodine (Sandra Bullock) goes full throttle to promote her candidate Castillo in the Bolivian Presidential race, Our Brand Is Crisis is pitched as a black comedy, a political satire about corruption, economics and lies. However, it is more about her personal rivalry with the strategist of the opposing camp, Pat Candy (Billy Bob Thornton), and the revenge she attempts to exact on him. And the plot becomes much less lofty than its premise.

Indeed - movies about big issues are often not about big issues. They are usually about things much smaller. Like stories and characters. These movies aren't in the dimension of TED talks or analytical presentations on resolving the hunger situation in Ethiopia. These affairs are of a more familiar vein - of sitting next to the fire and listening with perked ears to an animated raconteur rattling off the same story for the hundredth time.

And you'll be wiser by this information on what to expect from this movie. Because, regardless of what the promotion makes you feel and what the source content is (a documentary on a real Bolivian election in 2002), this film here is campy. It is camp masquerading as intellect. Let's throw a couple of qualifiers in. It is good camp doing a very good job of masquerading as extraordinary intellect.

If you can retain this knowledge while watching the film, you'll find much to appreciate. Starting with the protagonist.

Some people dislike Sandra Bullock. It's possibly the attitude. That one where she seems to be saying "I know I'm famous and I'm a star but hey, if you find a bunch of spinach stuck in my teeth, that's your problem". (Coming up next on I'll Be Ordinary Even If I'm A Star - Jennifer Lawrence). But thankfully, these people who dislike Bullock are a minority. The rest of us, of course, are more than happy to watch her cruise through these strong-yet-vulnerable roles giving them a touch of stubborn humanity as few others could.

And the antagonist is the suave Devil himself. Billy Bob Thornton who was as cool as he was chilling in season one of Fargo continues the act here with aplomb. He plays yet another guy whose blood sample, should you find it, will test positive for ruthless. The film doesn't offer him enough screentime but he negotiates standoffs in the scenes he shares with Bullock. The rest of the cast weighs in occasionally, and is generally spot on.

The grittiness of the Latin American political and economic landscape is well-captured, and the visuals go for a docu-drama feel which enhances the movie to an extent. The score gives away the lightness of the proceedings despite the heaviness of the setting.

In the course of the campaign the film largely follows the one-upping between lead and nemesis. Some of the tactics are interesting and some of them ridiculous and thereby funny. Like a scene where a bus overtakes another one around the edge of a cliff and Bullock flashes her rearside to the other party. Deep stuff? Haha! No. Camp Glory? Haha! Yes.

It however becomes a depressing affair when the film occasionally glances on the larger issues. This is the very sort of devastating reality to avoid which most of us run to the movies every weekend. If the movie itself is going mull over such issues, it better do something seriously good with it. Like Wag The Dog (1997) which was quite the quintessential political satire. Or the movie could go all out and be something cheesy like The Campaign (2012).

Our Brand Is Crisis tries to find middle ground without full success. However, considering the competition (The creaky Daddy's Home or the considerably better Wazir), you may well elect this one for your weekend movie. As promoters, though, we aren't as zealous as the ones in the movie.
Share. Save. Connect.
Tweet
OUR BRAND IS CRISIS SNAPSHOT 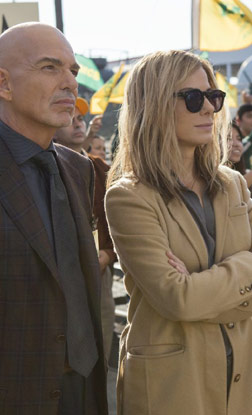 ADVERTISEMENT
This page was tagged for
Our Brand Is Crisis english movie
Our Brand Is Crisis reviews
release date
Sandra Bullock, Billy Bob Thornton
theatres list
Follow @fullhyderabad
Follow fullhyd.com on
About Hyderabad
The Hyderabad Community
Improve fullhyd.com
More
Our Other Local Guides
Our other sites
© Copyright 1999-2009 LRR Technologies (Hyderabad), Pvt Ltd. All rights reserved. fullhyd, fullhyderabad, Welcome To The Neighbourhood are trademarks of LRR Technologies (Hyderabad) Pvt Ltd. The textual, graphic, audio and audiovisual material in this site is protected by copyright law. You may not copy, distribute, or use this material except as necessary for your personal, non-commercial use. Any trademarks are the properties of their respective owners. More on Hyderabad, India. Jobs in Hyderabad.