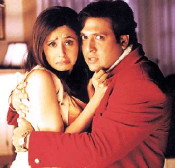 Arpan Panicker / fullhyd.com
EDITOR RATING
3.0
Performances
Script
Music/Soundtrack
Visuals
NA
NA
NA
NA
Suggestions
Can watch again
NA
Good for kids
NA
Good for dates
NA
Wait for OTT
NA
Govinda and David Dhawan are back together after a long break - after having delivered individual hits and thus having silenced critics who said they were helpless without each other. But this time their magic seems to have failed.

The result - a totally insipid movie with no special points to attract the audience and make a mark. The initial hype and publicity, though, is amazing, with advance booking lists showing housefull boards for weeks together.

The story: Raju (Govinda) and Urmila (Urmila Matondkar) meet each other and, after initial hiccups, fall in love. All this happens against the scenic locales of New Zealand (why does love happen only in foreign locales?). On his return to India, Raju runs into Sharmila (Nagma).

Now, Sharmila is a weepy-eyed female who is going to commit suicide, as she is pregnant and her lover (Inder Kumar) has deserted her. Our hero Raju can't keep his finger out of messy pies and so pretends to be her husband and accompanies her when she goes home.

Then things get complicated when it is revealed that Urmila is Sharmila's sister, and when she finds out that her sister's husband is her beau... ouch! The rest of the movie sees our invincible Govinda unravel mess after mess, even as he keeps creating newer ones. Comedy, action, romance, and emotional drama - our guy takes care of the whole gamut.

The story, of course, is not original. Baavagaru Baagunnara, a Chiranjeevi movie, had a similar story. The only original thing in the movie is Govinda, and he too is getting repetitive. The others in the movie might just as well have been props. And by the way, Urmila would make a great mannequin, for all the effort she puts into the movie.

The comedy track - with Johnny Lever and Kader Khan - is brazen and loud as usual. Actually, when Govinda is doing a good enough job of keeping the audience in splits, I think they (the audience, i. e.) should be spared the agony of having to contend with Johnny Lever's face each time they go to see a Govinda movie. The music is more a liability than an asset, and at the end of the day, David Dhawan and Govinda might just have made their worst film together.

ADVERTISEMENT
This page was tagged for
Kunwara hindi movie
Kunwara reviews
release date
Govinda, Urmila Matondkar
theatres list
Follow @fullhyderabad
Follow fullhyd.com on
About Hyderabad
The Hyderabad Community
Improve fullhyd.com
More
Our Other Local Guides
Our other sites
© Copyright 1999-2009 LRR Technologies (Hyderabad), Pvt Ltd. All rights reserved. fullhyd, fullhyderabad, Welcome To The Neighbourhood are trademarks of LRR Technologies (Hyderabad) Pvt Ltd. The textual, graphic, audio and audiovisual material in this site is protected by copyright law. You may not copy, distribute, or use this material except as necessary for your personal, non-commercial use. Any trademarks are the properties of their respective owners. More on Hyderabad, India. Jobs in Hyderabad.