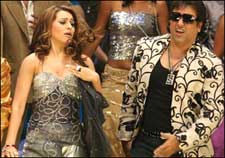 Samrat Sharma / fullhyd.com
EDITOR RATING
3.0
Performances
Script
Music/Soundtrack
Visuals
3.5
1.0
4.0
3.0
Suggestions
Can watch again
No
Good for kids
No
Good for dates
No
Wait for OTT
Yes
MHTHH is a mess.

That's all you need to know. In a season full of unfunny me-too comedies, this one doesn't stand out as anything much, and is not worth the 10 or so minutes you will spend in reading the review. Stop reading, and go watch Russell Peters on YouTube. Much, much funnier. For the masochists in us, however, here goes.

MHTHH is a least common denominator film that tries to be excessively formulaic in search of that elusive quick buck. It has what the makers think of as the golden pot - everything. Problem is, it doesn't. It has a plot that is as madcap as they come, a more-than-eclectic ensemble, and is full of double entendres and item numbers. They forgot the funny.

Absolutely uninterestingly shot, badly choreographed and lazily acted in, the film has the added bonus of being unfunny. The jokes fall flat, the physical comedy is cringe-inducing, and the attempts at pandering to the front benchers come off as crass and in poor taste. As bad as the production is, the writing is the biggest criminal here.

The plot may seem interesting on paper: Bobby, a runaway; Lalabhai, a failed businessman; Gaurav, an unemployed writer; Manik, a struggling model; Ashima, an aspiring film actress; Shruti, a dress designer with no clients. All of these people get a message one day telling them they have inherited a business worth Rs. 1,000 crores. They have seemingly been picked at random, and the truth is the business is a write-off.

They now have to turn the business around and pay off the debtors. Until such time, they are forced to stay at a mansion. There is potential for comedy in this plot twist, but this only arrives near the second half, the script taking an entire half of the film to just establish the characters. Not only does this not advance the plot in any way, it bores us senseless for a solid hour.

Out to make a quick cheque and possibly salvage their careers, the lead actors are barely even running through the motions. Govinda's role and his onscreen antics needed someone much, much younger. Though he tries, it rarely works. Aftab and Manoj actually manage a decent comic timing, but the writing fails them every single time. Unfunny jokes just linger on endlessly. Which brings us nicely to Celina Jaitley.

Let us call this the CJ Theorem: any movie with Jaitley in it promises to be not only unfunny, but absolutely offensive. You really have to have hit the bottom of the generic comedy barrel when you approach her for a role. I'm not necessarily blaming her, because bad actress that she is, she tries everything she can in the spirit of making movies. It's just that what she is given to do - in this as in all films - is to be a bimbette and take off clothes.

Topping it off nicely is Upen Patel. His is the sort of vacuous onscreen presence that sucks whatever life there is on screen at all. His negative charisma takes a bad comedy and makes it a forgettable one. The thing with the former is that at least a few can enjoy it on DVD; enough to be labeled a cult film. Patel through sears by his un-charm to ensure that won't happen here.

Reading through till here shows you have a lot of capacity to take hurt. Even then, be warned: MHTHH delivers more than what you might be able to sustain.
Share. Save. Connect.
Tweet
MONEY HAI TOH HONEY... SNAPSHOT
MONEY HAI TOH HONEY HAI SNAPSHOT

ADVERTISEMENT
This page was tagged for
hindi movie money hai toh honey hai movie hd
money hai toh honey hai full movie
Money Hai Toh Honey Hai hindi movie
Money Hai Toh Honey Hai reviews
release date
Follow @fullhyderabad
Follow fullhyd.com on
About Hyderabad
The Hyderabad Community
Improve fullhyd.com
More
Our Other Local Guides
Our other sites
© Copyright 1999-2009 LRR Technologies (Hyderabad), Pvt Ltd. All rights reserved. fullhyd, fullhyderabad, Welcome To The Neighbourhood are trademarks of LRR Technologies (Hyderabad) Pvt Ltd. The textual, graphic, audio and audiovisual material in this site is protected by copyright law. You may not copy, distribute, or use this material except as necessary for your personal, non-commercial use. Any trademarks are the properties of their respective owners. More on Hyderabad, India. Jobs in Hyderabad.