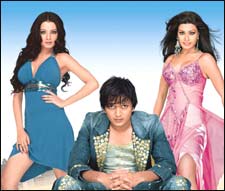 Samrat Sharma / fullhyd.com
EDITOR RATING
5.0
Performances
Script
Music/Soundtrack
Visuals
NA
NA
NA
NA
Suggestions
Can watch again
NA
Good for kids
NA
Good for dates
NA
Wait for OTT
NA
Comedy has become big business in Bollywood of late. There are the Priyadarshan confusion riots, the Hrishikesh Mukherjee hearkening Munnabhais and Khoslas, and then there are the low-budget slapstick-y Mastis and Kya Kool Hai Hums. No prizes for guessing which group Apna Sapna Money Money belongs to, but the fact remains that making a comedy and raking in the moolah has become a lucrative and simple mantra in Bollywoodland, and Mukta Arts too sees this as a quick way of creating funds for the higher budget outings they intend to invest in.

In which case, who better to create a low budget slapstick than Sangeeth Sivan, the man who surprised everyone when Kya Kool Hai Hum hit the big time? Apna Sapna Money Money is a by-the-numbers comedy with all the ingredients that are deemed 'funny' by the makers. A hapless boy next door in love, a garibon ki basti, a smart-alec hero, a silly villain, plentiful cleavage and thunder thighs, a drag act (coupled with an oldie falling for the 'woman'), 'karodon ke heeray', innuendo laden gags, a confusion laden climax where everyone runs around, a hapless guy who gets punched a lot, and, of course, Rajpal Yadav.

There are some new things added to the milieu which range from interesting (Nepali Gorkhas as an organized ring) to the plain silly (there are many, but a glaring example is a close-up of a buffalo's behind), and all this is served in a riot of colors and a loud background score.

The entire discussion of the film's merit is moot, however, as this is the kind of film everyone knows what to expect of. The people who enjoy this kind of comedy will enjoy the movie's plentiful gags, and the ones who do not have a fair idea of the film and will stay away. Another Munnabhai this is not. This is a film that knows its target audience, and serves up all kinds of funny to please them. Even if the plot and treatment borders on the silly.

Apna Sapna Money Money is about a hapless next door mechanic Arjun (Shreyas Talpade), who is smitten by the sweet girl next door Shivani (Riya Sen), whose father, the reverent but half blind Pandit Shastri (Anupam Kher) does not approve.

To help him get his girl, Arjun asks his cousin to help him. The cousin, Kishan (Ritesh Deshmukh), is a con man with a disguise fetish, and agrees to come help him when his latest scam invites the ire of local Gorkhas, led by Rana (Chunkey Pandey).

Added to the mix is Sania (Celina Jaitley), who is a carrier girl for a fearsome but going-bankrupt mafioso, Carlos (Jackie Shroff). When the bumbling inspector Namane (Suniel Shetty) zeroes in on her, she hides the aforementioned 50 karodon ke heeray in a bag that Kishan picks up. Carlos decides to enlist the help of MataPrasad (Rajpal Yadav), a dairy owner with a Sarkar hangover. Then Ritesh goes ahead and does a drag act and names himself Sania as well.

Needless to say, there is a lot of running around, plenty of gags and general buffoonery before the film reaches its even more harum-scarum finale. The story is, as to be expected, only to serve up the jokes, and stops making sense long before the finale hits.

Surprisingly, despite the flawed and hole-ridden plot, the film manages to keep the gag quotient up by introducing funny lines, puns, slurs and some innuendo, most of them the crowd-pleaser variety, but some real witty ones hidden here and there. Of course, the gags would have been a waste if the cast could not keep up with the racy script.

That is thankfully not the case. Ritesh manages to carry most of the film on his shoulders with a confident and irreverent performance that keeps the film fresh. Shreyas gets the thankless job of swooning and pining, but does that with earnestness. Koena and Celina are meant to look pretty and flash cleavage all around, and do what they are paid for.

Jackie has a funny bone that is not used well here, but the most criminal is Rajpal's short run. His is the most madcap character and his chemistry with Sunil Pal is palpable. Despite being the funniest thing about Apna Sapna..., he is underutilized, and you wish for more of him.

Despite a serviceable cast and a gag-laden script, the film never tries to reach higher. It is content with being another low-budget mass-friendly comedy which will be forgotten almost immediately. That is the movie's single greatest strength, as it serves up the entertainment it set out to, but also its single greatest flaw as it never creates a witty enough or funny enough ambiance. It revels in being mediocre and silly, and while there is nothing wrong with that, the fact that Sivan doesn't even try hard, hurts.

Ultimately Apna Sapna… is a piece of junk food. It's a guilty pleasure that you know will not be filling or nutritious. Yet, as long as you can enjoy the taste of it, you take a bite. You just wish there was more of a kick to the chutney. And less of the buffalo behinds.
Share. Save. Connect.
Tweet
APNA SAPNA MONEY MONEY SNAPSHOT