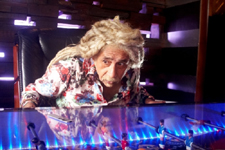 Ravi Kandala / fullhyd.com
EDITOR RATING
2.0
Performances
Script
Music/Soundtrack
Visuals
2.0
2.0
2.0
2.0
Suggestions
Can watch again
No
Good for kids
No
Good for dates
No
Wait to rent it
No
In Chitram Bhalaare Vichitram, Brahmanandam's character keeps abusing his grandfather all through the movie, saying that if he had done something, his life would have been much better. When finally one of the characters asks him what his grandfather should have done, he says that if only his grandfather had been born as a Birla or a Tata, he would not have had to endure all these hardships in life.

This is the exact scene that played out in our heads as we walked out of Jackpot - another production from Sachin Joshi - the man behind monstrosities like Mumbai Mirror and Aazaan. Sachin Joshi is heir apparent to the JMJ group (Manikchand group, to be precise), and fancies himself as a film hero. And just because he has he money to spend, he keeps acting in and producing one terrible movie after terrible movie.

We probably wouldn't have minded that much if he had any acting chops at all, but considering the fact that his face has one question-mark expression, and his voice has as much modulation as a frog, we mind terribly.

Coming to Jackpot, the movie comes from the man who gave us the infamous Boom - yes, the same Boom in which Katrina Kaif, Pada Lakshmi and Madhu Sapre showed more skin than Mallika Sherawat in all her Cannes appearances - Kaizad Gustad. This man was apparently in trouble due to the death of a technician on the sets of one of his masterpieces. He's managed to extricate himself from the trouble, but only ends up making us wish he had stayed in trouble longer.

Jackpot is about Boss (Naseeruddin Shah), a casino owner in Goa, his secretary Maya (Sunny Leone) and a group of con artists headed by Francis (Sachin Joshi). Boss makes a deal with Francis and his group to host a jackpot of Rs. 5 crore in his casino, get the prize money stolen by Francis, and then claim insurance for the lost money. The con game becomes deadly, as the players are bumped off one after the other and everyone is suspicious of everyone else. Who gets the Jackpot is what the film tells us.

Or does it? Jackpot follows a non-linear narration, and is extremely difficult to follow. The first half of the film is broken up into random chapters with vague titles, and the format is conveniently forgotten in the second half.

Naseeruddin Shah's extremely weird hairstyle and his weirder dialogues (he is heard saying that he will charge extra if he has to dance at a wedding) go a long way to show how disinterested he was in the whole movie. The pace of the film is non-existent, and would give tough competition to a snail, even losing to it by quite a margin at the end.

The editor, we are sure, was at a loss, and without an inkling of what the actual plot was, cut and pasted the spools, took his cut and pasted himself out of the picture. Kaizad's also lost his thing for sleaze by the looks of it. In spite of having Sunny Leone in the film, he barely lets the woman show any skin. The few swear words used in the movie, hence, end up carrying the burden of giving it the 'A' certificate it carries.

Sachin Joshi, like we mentioned earlier, is one note throughout - in looks, personality, acting and voice modulation. Sunny Leone has a supremely limited role that she does well in. Naseeruddin Shah, who gets the most interesting of the characters, ends up mouthing inane lines and issuing empty threats.

Jackpot is what happens when an eccentric mind teams up with a "bade baap kaa beta". Watching it will only make you lament that the fact your dad does not have as much money as Sachin Joshi's does.
Share. Save. Connect.
Tweet
JACKPOT (HINDI) SNAPSHOT 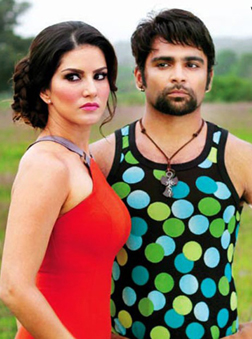 ADVERTISEMENT
This page was tagged for
Jackpot (Hindi) hindi movie
Jackpot (Hindi) reviews
release date
Naseeruddin Shah, Sunny Leone
theatres list
Follow @fullhyderabad
Follow fullhyd.com on
About Hyderabad
The Hyderabad Community
Improve fullhyd.com
More
Our Other Local Guides
Our other sites
© Copyright 1999-2009 LRR Technologies (Hyderabad), Pvt Ltd. All rights reserved. fullhyd, fullhyderabad, Welcome To The Neighbourhood are trademarks of LRR Technologies (Hyderabad) Pvt Ltd. The textual, graphic, audio and audiovisual material in this site is protected by copyright law. You may not copy, distribute, or use this material except as necessary for your personal, non-commercial use. Any trademarks are the properties of their respective owners. More on Hyderabad, India. Jobs in Hyderabad.