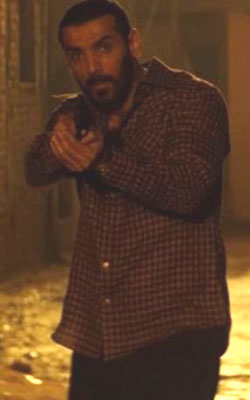 Romeo Akbar Walter, a Hindi movie, is not currently screening in any theatres in Hyderabad.
LATEST COMMENT
singhprashast2011 on 5th Apr 2019, 9:06pm | Permalink
Romeo Akbar Walter is an impressive action thriller that however might not impress die-hard thriller fans, largely because the twists (except a few) and suspenseful moments are pretty much predictable. This doesn't really harm the film since it's gripping and frequently gives up tension and action throughout the duration.


Pros: John Abraham's act, some good twists, visuals and action scenes.
Cons: Predictable thrills, random songs and an occasional slow pace.
1
0
USER RATING
9.0
See all comments
ROMEO AKBAR WALTER REVIEW
The very first scene in Romeo Akbar Walter shows you a bleeding John Abraham being subjected to third-degree in an ISI holding cell in Karachi, and you expect to be thrust into action from the word go. Instead, what you get is a slow-burning spy thriller that takes its own sweet time, and to reach a rather incredulous conclusion after it all. Director Robbie Grewal claims to have picked up the idea for his movie during a conversation in 2012 with his father Major M S Grewal who also served in military intelligence himself. It took seven years for the director to research and bring his vision ....

ADVERTISEMENT
This page was tagged for
Romeo Akbar Walter hindi movie
Romeo Akbar Walter reviews
release date
John Abraham, Mouni Roy
theatres list
Follow @fullhyderabad
Follow fullhyd.com on
About Hyderabad
The Hyderabad Community
Improve fullhyd.com
More
Our Other Local Guides
Our other sites
© Copyright 1999-2009 LRR Technologies (Hyderabad), Pvt Ltd. All rights reserved. fullhyd, fullhyderabad, Welcome To The Neighbourhood are trademarks of LRR Technologies (Hyderabad) Pvt Ltd. The textual, graphic, audio and audiovisual material in this site is protected by copyright law. You may not copy, distribute, or use this material except as necessary for your personal, non-commercial use. Any trademarks are the properties of their respective owners. More on Hyderabad, India. Jobs in Hyderabad.