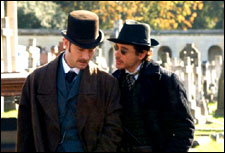 Samrat Sharma / fullhyd.com
EDITOR RATING
7.0
Performances
Script
Music/Soundtrack
Visuals
8.5
6.0
7.0
7.0
Suggestions
Can watch again
Yes
Good for kids
No
Good for dates
Yes
Wait for OTT
No
The first thing that surprises about this newest adaptation of the adventures of the greatest detective of all time was how muscly it is. Big punch-outs were alluded to in the trailers, but the overall tone of the film is very much in-your-face action adventure as opposed to a Victorian-era old-school procedural. The men are dhishoom! men, and the women are fatales - it's... very hinterland machismo for the most of it.

Ritchie hasn't taken too many liberties with the characters themselves - it is his vision for this world that has a new age sensibility to it. Probably for the good because while it doesn't appear fresher than any of the many action films you see these days in its cinematic language, it does end up having a pace that is breakneck, and your circumspection takes time to set in.

It's also a good thing because it gives Robert Downey Jr. a familiar visual landscape to come and do his thing. Downey Jr. is the quintessential superstar - good acting coupled with solid charisma. In RDJ's hands the film is elevated from a rote action film to something genuinely engaging. RDJ is the big solid wall on one side of which is this film, and on the other side travesty.

RDJ makes his scenes sing, and the interactions with Watson especially end up bringing genuine mirth to the movie. Jude Law is a fun actor, and he is increasingly making less tiresome choices. It's fun to watch him do his straight up ex-army man thing, and it while this is still a Holmes film, Watson ends up having quite an imprint. The two leads have great chemistry and drive the film forward, especially when it threatens to derail on itself.

The other sides to the coin work as much as they don't. Rachel McAdams is sweet, and I have likened her to a classic film actress before, but here, possibly because of RDJ's immense charisma to compete with, her Irene Adler does not appear as someone who is an equal to Holmes, or may have bested him before. She is serviceable, but never the stalwart the character requires her to be. Mark Strong, though, just by virtue of being Mark Strong, brings a menace to his Lord Blackwood that is palpable. He chooses to chew scenery over his usual restrained self, and it works spectacularly, given the poorly-written character.

Blackwood is written as a black magician, and since this is Holmes we are talking about, we all know it's going to be a â€œHoi Hoi, it was old farmer McDonald all the timeâ€ twist in the end. This isn't a spoiler - the whole movie around the leading characters seems like it was written by cartoon veterans, with simpler explanations and very less actual detection taking the place of Homes doing his magic.

Still, Ritchie tends to bring certain flourishes that save the film from appearing, well, stupid. There are some shots explaining the world as seen through Holmes' mind - the fisticuffs mostly - and those are the most special moments he has created. This isn't a personal film for Ritchie, but he brings some of his own stamp to those scenes. It doesn't get overboard, and to his credit, he takes a fairly dumb script and makes it work with minimum incredulity on our part.

The movie has a certain stagey feel to it that works quite well in his hands. It all appears like an RDJ film with Jude Law playing Watson on a set doing some great character work and action sequences (as opposed to a window to a time and place forgotten with real characters doing real things). This is a good thing because it removes us a step from the characters, letting us soak in the charisma and humour and muscle and decent action, while not fully immersed in a plot which isn't all there.

I can find faults with the film all day, but I can equally find good things to say about Downey Jr.'s and Law's amazing work. Sherlock Holmes is not a flawless film, but it is immensely enjoyable, and definite good times at the cinemas. It doesn't require you to keep your brains at home, but neither does it necessarily stimulate it. It's the Holmes-as-action-superhero conceit, and it works stunningly.
Share. Save. Connect.
Tweet
SHERLOCK HOLMES SNAPSHOT


Pros: Downey and Law
Cons: Not much actual detective work

RATING
8
vamsi on 20th Jan 2010, 5:55pm | Permalink
They've changed Holmes' character, he's less detective, more action & tomfoolery & a bit of romance. Fans like me won't like the liberty they've taken, but that's creativity :) Downey Jr. did well, the unkempt disorganized genius. Jude Law is a more assertive and involved watson than the original. Rachel McAdams is quite lovely, but doesn't do justice to the Irene Adler character. Movie is gritty & full of fluid action. Music by hans zimmer is awesome. Sets & costumes top notch. Story is just plausible, & plot gets kinda slow in the middle, but overall good entertainment. They've shamelessly woven the threads for a sequel right from the middle! I didn't expect much more than a brainless action movie, movie was a little better than that!

RATING
7
Ravi Ingua on 9th Jan 2010, 10:02pm | Permalink
Not up to expectations but thoroughly enjoyable.

Ravi Ingua on 9th Jan 2010, 10:02pm | Permalink
Not up to expectations but thoroughly enjoyable.

ADVERTISEMENT
This page was tagged for
Sherlock Holmes english movie
Sherlock Holmes reviews
release date
Robert Downey Jr., Jude Law
theatres list
Follow @fullhyderabad
Follow fullhyd.com on
About Hyderabad
The Hyderabad Community
Improve fullhyd.com
More
Our Other Local Guides
Our other sites
© Copyright 1999-2009 LRR Technologies (Hyderabad), Pvt Ltd. All rights reserved. fullhyd, fullhyderabad, Welcome To The Neighbourhood are trademarks of LRR Technologies (Hyderabad) Pvt Ltd. The textual, graphic, audio and audiovisual material in this site is protected by copyright law. You may not copy, distribute, or use this material except as necessary for your personal, non-commercial use. Any trademarks are the properties of their respective owners. More on Hyderabad, India. Jobs in Hyderabad.