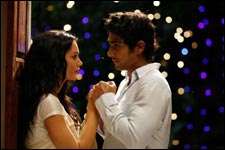 Chandrika Murthy / fullhyd.com
EDITOR RATING
5.0
Performances
Script
Music/Soundtrack
Visuals
5.0
5.0
8.0
8.0
Suggestions
Can watch again
No
Good for kids
No
Good for dates
No
Wait for OTT
Yes
Ekk Deewana Tha fails to evoke any kind of romance that its southern counterparts Vinnaithaandi Varuvaayaa in Tamil and Ye Maya Chesave in Telugu successfully accomplished. It might not go down too well with someone who has watched either or both of these flicks.

The oft-repeated theme of "boy sees girl, falls in love with her, chases her and finally convinces her" has been around forever, and Ekk Deewana Tha only seeks to reinvent the wheel. Sachin (Prateik Babbar) is a "vella" mechanical engineer obsessed with filmmaking and, of course, Jessie (Amy Jackson). Our heroine, on the other hand, is an MCA in a lucrative IT job.

The differences don't end there. Both of them are from different religions and cultures (he is a Maharashtrian Brahmin, and she, a Malayali Christian). Our boy loves movies, and the girl has just watched 5 movies (or was it 7?) in 23 years. And yes, the girl happens to be one year older to the guy. In addition, there is opposition from her family.

There are several reasons why this film doesn't click with the Hindi audience. The main problem with it is its slow pace. The story drags at places, and events unfold gradually, taking their own sweet time. There is no place for such a leisurely approach in this age of instant gratification. The outdated dramatic declarations of love, like "pehla pyaar", don't help either.

The second problem is the lack of chemistry between the lead pair. The crux of a love story rests on the physical and emotional intimacy between its protagonists, and sadly, Prateik and Amy fail to stir any passion in us. Even the blink-and-you-miss-it love-making scene between them doesn't do much.

Then, there is Jessie's confused character. First, she resists Sachin. Then, she goes for him. Then she leaves him, only to come back again. No, wait - does she not return to him in the end? We, for sure, were lost there.

You don't appreciate Prateik Babbar instantly, in the first shot, but he becomes likeable during the course of the movie. That makes Ekk Deewana Tha bearable to an extent.

Amy Jackson is pretty, and restores our faith that nothing looks as good on a woman as an immaculately-tied saree. She essays the role of a confused girl torn between her desires and that of her parents quite well, considering that this is her first movie.

But it is Manu Rishi who takes away the cake, and the cherry, too. He plays the hero's friend, confidante, love-guru, Scotch companion and cameraman, delivering some of the funniest lines of the movie with natural finesse.

Having said all this, the movie is a visual extravaganza, which is a saving grace. Every scene reflects the work of a genius. The Taj Mahal in the backdrop looks pristine and beautiful, and the shots of Kerala's backwaters tempt you to pack your bags and head there. The songs have been creatively shot, portraying the romance quite well.

The soundtrack by A R Rahman, that was a huge success down south, brings you much-needed relief from the monotony of the movie. The music is the same as in the Tamil and Telugu versions, with Javed Akhtar's lyrics, and there's poetry, rhythm and melody in the tunes. But then, there is no "Sheila", "Munni" or "Chameli" to grace the dance floors.

ADVERTISEMENT
This page was tagged for
Ek Deewana Tha hindi movie
Ek Deewana Tha reviews
release date
Prateik Babbar, Amy Jackson
theatres list
Follow @fullhyderabad
Follow fullhyd.com on
About Hyderabad
The Hyderabad Community
Improve fullhyd.com
More
Our Other Local Guides
Our other sites
© Copyright 1999-2009 LRR Technologies (Hyderabad), Pvt Ltd. All rights reserved. fullhyd, fullhyderabad, Welcome To The Neighbourhood are trademarks of LRR Technologies (Hyderabad) Pvt Ltd. The textual, graphic, audio and audiovisual material in this site is protected by copyright law. You may not copy, distribute, or use this material except as necessary for your personal, non-commercial use. Any trademarks are the properties of their respective owners. More on Hyderabad, India. Jobs in Hyderabad.