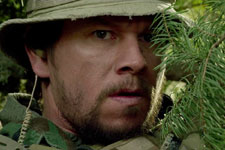 Swayamsrestha Kar / fullhyd.com
EDITOR RATING
7.0
Performances
Script
Music/Soundtrack
Visuals
7.0
6.0
7.5
7.0
Suggestions
Can watch again
Yes
Good for kids
No
Good for dates
No
Wait for OTT
No
The most terrible of deaths is one that is long-drawn-out and inevitable. Every laboured breath that follows its raspy predecessor seems like a waste of time, a cruel and forceful stretching out of the wispy strands of life for the expense of a joke to amuse an ultimately indifferent god. This is why a soldier dying out in an extremely treacherous terrain, under hostile fire, and without any hope of rescue might behave with surprising valour - because these last few minutes of his life are when the soldier is at his bravest.

The unavoidably staunch knowledge of approaching death turns him gallantly patriotic, and he wants to account for each breath he draws with the death of an enemy, one corpse for each gasp he lets out, one death each to avenge the deaths of his brothers before him; at the same time, exacting vengeance for his own oncoming demise.

One of the starkest scenes in The Lone Survivor shows a mortally wounded soldier shooting at enemies with reckless abandon, while crawling around in his dying state. As bullet after bullet embeds itself into his body, and with every passing moment, his fear of death diminishes, we catch the glimpses of a true hero - one who doesn't go down without a fight, and one who emerges, out of the dying embers of an otherwise mediocre life that ended with burning vengeance, like the proverbial phoenix.

More often than not, it is this phoenix of a memory that gets remembered and honoured.

The Lone Survivor is a film dedicated to four American Navy SEALs who had been involved in a covert operation in order to apprehend and/or terminate the chief of a Taliban unit in Afghanistan. It is a doomed mission to begin with, as enterprising people might decipher from the title, and as anyone who has read the book it is based on will know.

But that does not stop the makers of the movie from painting a picture which is liberally doused in displays of good old American-style indomitability. The cinematography attests to this attempt, with the cleanly shot frames, and crisp visuals, mostly consisting of broad-jawed men fervently gunning down enemies.

In spite of this kitschy romanticisation which only gets amplified as the film progresses, The Lone Survivor is still a particularly good movie. This is because director Peter Berg persistently maintains the tone of the film, handles his subject matter with deft and precise intent, and never loses the thread of the narrative.

Marcus Luttrell (Mark Wahlberg), Mike Murphy (Taylor Kitsch), Danny Dietz (Emilie Hirsch) and Matthew Axelson (Ben Foster) are the four soldiers who are assigned for surveillance of the geographical location of a Taliban group, on the mountains around a village in Afghanistan. They are ambushed by enemies and relentlessly pursued, and shot at.

The terrain is full of sharp rocky edges and slippery slopes, and is another enemy in its own way. While the Taliban soldiers are quite nimbly mobile in familiar settings, the American soldiers face considerable difficulty in manoeuvring an environment which is so blatantly unsuitable for combat. The story follows one soldier who survives and is eventually rescued.

While Lieutenant Murphy is the beloved leader whom junior officers like to idolise, Marcus is the perky rascal. While Danny is the angsty soldier who longs to return home, Axelson is the married cynic who misses his wife.

None of them is particularly looking for glory in war - Axelson longs to return home, and Danny is fretting over his new house back home. Of them all, Murphy's quiet moments of moral elevation manifest themselves in the scenes where he is telling his boys to "never add to the fight". This stoic belief in the fact that war, even if unavoidable, should never be actively encouraged, is a truly honourable one, and deserves a special mention.

The characters are not given enough time to develop and come into their own, but whatever sketching out is done is done sensitively, with a sense of fond reminiscence.

The films begin with brilliantly colourful sunrises over a breathtakingly beautiful cluster of mountainous valleys and ridges. The screenplay is peppered with intelligent dialogues, and the soundtrack is suitably non-intrusive. The combat scenes have been well-choreographed and edited.

Mark Wahlberg tries, in all earnestness, to convey the stubborn fury and desperation of a cornered soldier, but doesn't quite nail it down. Taylor Kitsch is very believable and endearing as Mike, the shaggy big-brother Lieutenant. Emilie Hirsch, who has oodles of experience portraying the kind of angst that youth specialises in, doesn't disappoint with his performance here either. And Ben Foster is decent enough as well.

In conclusion, The Lone Survivor is a war movie which could have made a much bigger impact, had it been a little more reckless - much like the spirit of the dying soldier which the film sets out to capture.
Share. Save. Connect.
Tweet
LONE SURVIVOR SNAPSHOT 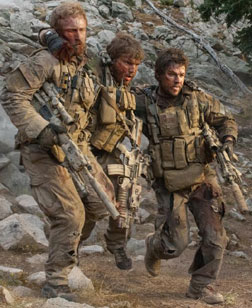 ADVERTISEMENT
This page was tagged for
Lone Survivor english movie
Lone Survivor reviews
release date
Mark Wahlberg, Taylor Kitsch
theatres list
Follow @fullhyderabad
Follow fullhyd.com on
About Hyderabad
The Hyderabad Community
Improve fullhyd.com
More
Our Other Local Guides
Our other sites
© Copyright 1999-2009 LRR Technologies (Hyderabad), Pvt Ltd. All rights reserved. fullhyd, fullhyderabad, Welcome To The Neighbourhood are trademarks of LRR Technologies (Hyderabad) Pvt Ltd. The textual, graphic, audio and audiovisual material in this site is protected by copyright law. You may not copy, distribute, or use this material except as necessary for your personal, non-commercial use. Any trademarks are the properties of their respective owners. More on Hyderabad, India. Jobs in Hyderabad.