War Of The Worlds (Telugu) Review 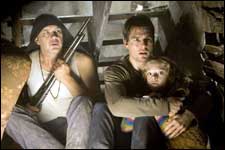 It was inevitable for a filmmaker of such a legend-spawning stature of today to take up the story of another vanguard thinker. Steven Spielberg's choice of book to base his latest magnum opus on is a promising merger of minds. The Spielberg signet - pulse stopping, dry-mouthed, jaw-dropping anticipation, the ability to imprint upon the mind by drawing upon primordial, instinctual, archetypal fears, the spellbinding ambience that ET, Jurassic Park and Indiana Jones created - joins forces with a classic, before-it-all-began tale.

The movie starts with a spiraling, Star Wars reminiscent galaxy scape, and an ominous sounding Morgan Freeman voicing over the famous starting line of the book: "Across the gulf of space, minds that are to our minds as ours are to those of the beasts that perish, intellects vast, cool and unsympathetic, regarded this earth with envious eyes, and slowly and surely drew their plans against us." Oh yes! The movie delivers, all right!

The film suffers from only one shortcoming, although, in my humble opinion, overlooking it is one's duty. It ends abruptly, providing very little by way of explanation for why the Martian war-machines suddenly fall apart and retreat. An explanatory sentence from the book, spoken by Freeman, provides a pointer. It speaks about mankind earning its right to continue existing, having proven its resilience for a million years and through a million threats.

Like a retelling of a Mahabharata or a Ramayana, the twist and the logic of the tale does not decide the merit of this movie. Only the feel of it does. And for one who reveres the story, as it has to be revered, the series of dots where there ought to be a full stop is the essential ambiguity of any great story. The elusive moral, the hidden message, for the taking of only the enlightened. A hazy finish suffices, and that viewer leaves with a mix of deeply sparked curiosity and humble gratefulness.

ADVERTISEMENT
This page was tagged for
war of the worlds telugu dubbed movie
war-of-the-worlds Telugu
war of the worlds full movie in telugu free download
war of the worlds Telugu download
war of the worlds full movie download in telugu
Follow @fullhyderabad
Follow fullhyd.com on
About Hyderabad
The Hyderabad Community
Improve fullhyd.com
More
Our Other Local Guides
Our other sites
© Copyright 1999-2009 LRR Technologies (Hyderabad), Pvt Ltd. All rights reserved. fullhyd, fullhyderabad, Welcome To The Neighbourhood are trademarks of LRR Technologies (Hyderabad) Pvt Ltd. The textual, graphic, audio and audiovisual material in this site is protected by copyright law. You may not copy, distribute, or use this material except as necessary for your personal, non-commercial use. Any trademarks are the properties of their respective owners. More on Hyderabad, India. Jobs in Hyderabad.