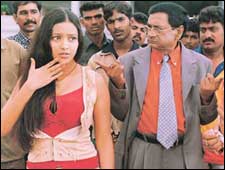 Mithun Verma / fullhyd.com
EDITOR RATING
3.0
Performances
Script
Music/Soundtrack
Visuals
NA
NA
NA
NA
Suggestions
Can watch again
NA
Good for kids
NA
Good for dates
NA
Wait for OTT
NA
Unlike most of the other movies, in this movie, you'd actually find yourself laughing at the comedy. That's until you discover that you've gone into the wrong theater. Once you get into the correct one, Preminchukunnam… will captivate you endlessly. Actually, the theater management will. They don't want to lose the only customer they've had in days.

Aditya (Aditya Om) is romancing Swapna (Rekha) while his best friend is romancing Swapna's sister. Seeing them coochicooing unabashedly, the world jinxes them with some bad luck. So they sing songs that sound like they're trying to drive away homicidal bad-luck souls.

They're generally happy about their lives when bad-luck arrives in the form of an ill-tempered grandmother (Shakuntalamma). She's of the opinion that her granddaughters do not deserve to be around anybody they love. The granddaughters plead with her and beg her. But she doesn't budge, and they're dragged away to their village.

In the heroines' house, Aditya settles down as a married tenant, while the other guy, as the philanthropic plumber. One day, it so happens that Aditya unknowingly grabs hold of Swapna (one of the granddaughters, heroine) and in full view of her grandmother, passionately rubs his hands on her dress. This blows the top off the grandmother. Which is very strange because it's not her top that he's rubbing against.

Anyway, in this whole chaos, he commits to the angry grandmother that his wife (remember he had said that he was married?) looks exactly like Swapna. Thus starts the double-role of the heroine, who isn't even good enough to play half-a-role. In fact, she isn't good enough to play a casserole. Tee hee hee!

With that much humor and a bit more in the form of Bramhanandam playing a dead body (for the second time, first being Bavagaru Bagunnara), the movie dwindles on till the climax. Here, a character who we thought was another comedian, turns out to be someone very important (suspense). That makes us laugh much more than all the cracks in the movie.

The plot is completely moronic - a perfect setup for some creepy comedy. But we never wished the cast also to be that way. What is missing from this work of Relangi Narasimha Rao is the execution. His earlier works had comedy kings like Rajendra Prasad and Naresh in the lead. The leads in this one are no comparison at all. Shakuntalamma as the grandmother is half-decent; She looks subdued than her normal self.

In all, this one can be ignored. But that can be difficult when you're the only one in the hall with nothing but the movie to keep you company.
Share. Save. Connect.
Tweet
PREMINCHUKUNNAM PELLIKI RANDI SNAPSHOT

ADVERTISEMENT
This page was tagged for
Preminchukunnam Pelliki Randi telugu movie
Preminchukunnam Pelliki Randi reviews
release date
Aditya Om, Rekha
theatres list
Follow @fullhyderabad
Follow fullhyd.com on
About Hyderabad
The Hyderabad Community
Improve fullhyd.com
More
Our Other Local Guides
Our other sites
© Copyright 1999-2009 LRR Technologies (Hyderabad), Pvt Ltd. All rights reserved. fullhyd, fullhyderabad, Welcome To The Neighbourhood are trademarks of LRR Technologies (Hyderabad) Pvt Ltd. The textual, graphic, audio and audiovisual material in this site is protected by copyright law. You may not copy, distribute, or use this material except as necessary for your personal, non-commercial use. Any trademarks are the properties of their respective owners. More on Hyderabad, India. Jobs in Hyderabad.