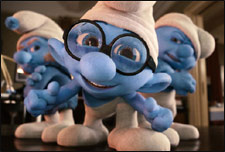 Nupur Barua / fullhyd.com
EDITOR RATING
7.0
Performances
Script
Music/Soundtrack
Visuals
7.0
7.0
7.0
7.0
Suggestions
Can watch again
Yes
Good for kids
Yes
Good for dates
Yes
Wait to rent it
No
Did you know that Peyo's little blue people were perceived as communist propagandists? Apparently, their little village, utopian as it was, was considered Marxist. This was in the 1980s, and things have changed over the past few decades. These days, the Smurfs are nothing more than harmless little things, brimming with cuteness.

In Raja Gosnell's latest movie, The Smurfs, 3D and live action come together to make the most hardened cynic go 'Awww'. The blue people, with an average height of 'three apples high' live in a mushroomed village, hidden from outsiders and protected by an invisible wall.

They are a content lot, these 99 Smurfs who worship their Poppa/Papa Smurf (Jonathan Winters), and spend their free time riding on storks. Named after their individual traits or professions, the Smurfs give Clumsy (Anton Yelchin) a wide berth as they prepare for the Blue Moon Festival.

The bane of their existence is a certain wizard named Gargamel (Hank Azaria) and his mean ginger cat, Azrael. The monstrous wizard wants to capture the blue people, to extract their essence into a potion that will make him invincible. He finally discovers where the village is hidden, but the little people get the better of him, at least for the time being, and escape.

Papa Smurf and 5 others go through a blue portal and land on the streets of New York. Circumstances lead them to take shelter with a couple, Patrick (Neil Patrick Harris) and Grace (Jayma Mays) Winslow, while they figure out how to get back to their village and save it from the evil Gargamel.

There, the Smurfs, with their blue noses and little blue bobtails, are the stars of the show. They sing the most annoying 'La la la la la la... Happy Song' that every non-Smurf cannot help hum, and spread goodwill and contentment wherever they go. As the Winslows soon discover, these creatures that Google lists as 'mythical' are harbingers of luck and happiness.

The voice artistes steal the show from the live action actors. All of them are convincing, and can evoke loads of laughter. The word 'Smurf' can be used as a noun, a verb, an adjective, or as a substitute for any other word, and that is the beauty of the Smurf language. For example, "You smurfed with the wrong girl", or "No smurfing way", or "Smurfexactly".

Working with invisible co-actors must have been tough for Neil Patrick Harris, but he is at his charming best. His deadpan expressions at the smurfy lines reflect what every adult in the theatre is experiencing. Jayma Mays is filled with glee throughout the movie, and while she may look ditzy, her childlike reactions are representative of how the kids in the audience feel.

Staying true to the spirit of the 1990s (a Raja Gosnell prerogative), the villain is made to ham and act stupid. At no point does he look menacing. Overacting is the key to carrying off a character like Gargamel, and Hank Azaria, with his prosthetic nose and bald head, is every kid's funny nightmare come true. The cat with the attitude is a fine complement.

The story is simple, and there are a few corny dialogues that accompany clichÃ©d situations. At times, the Smurfs may remind you of Snow White's Seven Dwarves; but make no mistake, the little blue men and girl are unique characters that are here to stay.

With their message of love and loyalty to friends and family, the movie just about stops short of being too preachy. To be fair, some of the gags, no matter how familiar, still manage to elicit appreciative laughter.

A definite watch for anybody under the age of 10, The Smurfs can be entertaining for adults as well, if they can go with the flow. Watching the 3D version of the movie is a must, to enjoy the beauty of enchanted lands, and that of the Big Apple.
Share. Save. Connect.
Tweet
THE SMURFS SNAPSHOT

ADVERTISEMENT
This page was tagged for
The Smurfs english movie
The Smurfs reviews
release date
Neil Patrick Harris, Jayma Mays
theatres list
Follow @fullhyderabad
Follow fullhyd.com on
About Hyderabad
The Hyderabad Community
Improve fullhyd.com
More
Our Other Local Guides
Our other sites
© Copyright 1999-2009 LRR Technologies (Hyderabad), Pvt Ltd. All rights reserved. fullhyd, fullhyderabad, Welcome To The Neighbourhood are trademarks of LRR Technologies (Hyderabad) Pvt Ltd. The textual, graphic, audio and audiovisual material in this site is protected by copyright law. You may not copy, distribute, or use this material except as necessary for your personal, non-commercial use. Any trademarks are the properties of their respective owners. More on Hyderabad, India. Jobs in Hyderabad.