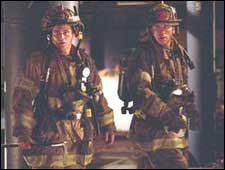 Deepa Menon / fullhyd.com
EDITOR RATING
3.0
Performances
Script
Music/Soundtrack
Visuals
NA
NA
NA
NA
Suggestions
Can watch again
NA
Good for kids
NA
Good for dates
NA
Wait for OTT
NA
A story of straight lines and simple convictions, Ladder 49 is very obvious in its post-9/11 goal to shine the light on national heroes. Its message is clear, and there never is any swerving from the fact that a firefighter is an entirely human hero, not to mention an entirely heroic human. Ahem.

Jack Morrison (Joaquin Phoenix) fairly bounces in for his first day of work at Section 33 of Baltimore's Fire Department, ready to walk through fire and save people all over the place. Some of the sheen rubs off in the subsequent ragging the boy's club at the station puts him through, but he never loses that fire in his belly (didn't you just see that coming?). In other words, Jack's just a regular guy who does the job that's in front of him, even if it involves hanging off a burning building, trying to find a way in.

Playing Jack's mentor and all-around father figure at the station is Capn. Mike Kennedy, played by John Travolta, who doles out tough love and good advice. Not really much of a role for the guy.

The story plays out as Jack lays broken and barely conscious on a pile of rubble deep inside a burning skyscraper. Between snatches of static radio conversation with his captain and plans to get him out, he relives the journey that brought him there.

Section 33 is about as jolly a fire station as you will find anywhere. The boys spend time torturing the rookies, as hapless new recruits are called. The only time that they quit fooling around is when that gong goes off. Then the lot of tumbling goofballs turns into a squad of purposeful soldiers radiating resolve and grit.

The movie is also about the families of fire fighters, who live in perpetual fear of the missed footstep and similar tragedies that result from entering an inferno equipped only with a hose.

Jack has his share of hard knocks too as he watches competent colleagues struck down by the unpredictability of the element they battle. We watch the young freshly scrubbed Jack turn into an equally earnest, but wiser husband and father. Phoenix is good because he's well, Phoenix. His role doesn't do him justice; he's better off playing the irresistible baddie.

Everything is as expected. The effort is to warm the cockles of your heart and get you feeling all inspired and fuzzy. It's corny, but not totally off the mark. The kind of movie that asks nothing of you, while it tells you patiently how to feel and when to think. Harmless enough, and engaging in bits thanks to its affable characters, Ladder 49 is strictly for lazy afternoons.
Share. Save. Connect.
Tweet
LADDER 49 SNAPSHOT

ADVERTISEMENT
This page was tagged for
Ladder 49 english movie
Ladder 49 reviews
release date
John Travolta, Joaquin Phoenix
theatres list
Follow @fullhyderabad
Follow fullhyd.com on
About Hyderabad
The Hyderabad Community
Improve fullhyd.com
More
Our Other Local Guides
Our other sites
© Copyright 1999-2009 LRR Technologies (Hyderabad), Pvt Ltd. All rights reserved. fullhyd, fullhyderabad, Welcome To The Neighbourhood are trademarks of LRR Technologies (Hyderabad) Pvt Ltd. The textual, graphic, audio and audiovisual material in this site is protected by copyright law. You may not copy, distribute, or use this material except as necessary for your personal, non-commercial use. Any trademarks are the properties of their respective owners. More on Hyderabad, India. Jobs in Hyderabad.