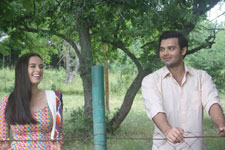 Nupur Barua / fullhyd.com
EDITOR RATING
3.0
Performances
Script
Music/Soundtrack
Visuals
5.0
3.0
5.0
6.0
Suggestions
Can watch again
No
Good for kids
No
Good for dates
Yes
Wait to rent it
No
The Indian film industry is kind to its aspirant novices when said novice is a star son. How else would you explain the return of Mithun Chakraborty's son Mahaakshay Chakraborty? But return he does in Ishqedarriyaan, a tepid love story that a young teenager could have written better.

His name here is, strangely, Agam Singh, and not Jimmy, as you almost expect. Agam is a billionaire with a swagger, but beneath all that attitude lies a philanthropic heart. He is possessive of his legacy, but even more possessive of his privacy, and does not even like being interviewed. He prefers to remain enigmatic and mysterious, until the arrival of a journalist, who claims that the company that he is so proud of has had its share of bloodshed.

Agam cannot believe it, and immediately discovers that there is, indeed, a lot that his father owes to people, in humanitarian terms. Specifically to one family, the members of which now live in Himachal Pradesh. Agam decides to do right by them, and with the moral support of his best friend (Kavin Kave), sets off for the hills. There he meets his father's victim's daughter, Luvleen (Evelyn Sharma), whose passion is to collect donations to support her school for underprivileged children. Agam falls in love with her, but she is in love with somebody else.

The third person in what becomes a love triangle is Arjun (Mohit Dutta), a musician. A chance meeting between Luvleen and Arjun leads to the beginnings of a romance, much to Agam's dismay. However, he is of the belief that love means willing sacrifices, and he becomes determined to ensure that Arjun and Luvleen unite. After all, as he tells his best friend, true love is all about letting go, as long as your beloved is happy.

A futile tearjerker, Ishqedarriyaan is not only dull, it is also pointless. A love triangle is always predictable, especially in a romantic movie, but this film goes beyond the obvious to make it even more monotonous. The attempt at humour is in bad taste, especially when young children are made to mouth very adult dialogues. The romantic dialogues are clichéd and not at all heartfelt. Liberally peppered with inane twists, the screenplay is a mash-up of many romantic movies we have seen in the past, and offers not a single redeeming factor that could have made the film worth watching.

Termed a "simple" love story by the makers and actors, Ishqedarriyaan ironically suffers primarily from the pretentious intensity that the characters display. Agam is intense, and you are made aware of that with music and some ludicrous expressions. Luvleen is pure and innocent, because she is always smiling, and because she loves children. Arjun is intense, because he plays a guitar. Not much has changed in storytelling since the days of Saajan and other such love triangles, we presume, but at least those had better music. The movie never leaves you guessing, and once the characters yammer on about true love, you know it is a lost cause.

Mahaakshay Chakraborty is hindered by his voice. Period. At times, he manages to resemble a forlorn Himesh Reshammiya, and that is the expression that best suits him. He does not offer a wide range of emotions anyway, and seems quite out of place in this film. Evelyn Sharma, with what seems to be a dubbed voice, is sickeningly sweet, and uninspiring. Mohit Dutta gives it all he has, but it is not enough. Kavin Kave is the only bright spark in the otherwise depressing movie. And Suhasini Mulay is underused.

Both the production and costume designs are executed in what seems to be a lazy fashion. Obvious efforts have been made to make the world of Agam and Luvleen as soft and pleasant as possible, resulting in some unrealistic visual representations of the same - more candy floss than authentic. The songs, too, are average, and lack the soul that they pretend to have.

The cinematography salvages the otherwise tiresome sequences by giving you a few breath-taking shots. It has very little to work with, though, and ends up being postcard-perfect but lacking in intensity. The editing does not pay much attention to the interactions between the characters, and cuts rather haphazardly, making the movie difficult to watch.

Ishqedarriyaan, to be fair, may have been made with utmost sincerity, but by a team still stuck in the 1990s as far as movie-making is concerned. Contemporary audiences may not have much patience for it, especially the urban film-goers. Despite its clichés and dismal script, the film may still do well in certain parts of the country, but we suggest you avoid it.
Share. Save. Connect.
Tweet
ISHQEDARRIYAAN SNAPSHOT 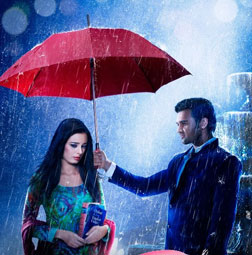 ADVERTISEMENT
This page was tagged for
Ishqedarriyaan hindi movie
Ishqedarriyaan reviews
release date
Evelyn Sharma, Mahaakshay Chakraborty
theatres list
Follow @fullhyderabad
Follow fullhyd.com on
About Hyderabad
The Hyderabad Community
Improve fullhyd.com
More
Our Other Local Guides
Our other sites
© Copyright 1999-2009 LRR Technologies (Hyderabad), Pvt Ltd. All rights reserved. fullhyd, fullhyderabad, Welcome To The Neighbourhood are trademarks of LRR Technologies (Hyderabad) Pvt Ltd. The textual, graphic, audio and audiovisual material in this site is protected by copyright law. You may not copy, distribute, or use this material except as necessary for your personal, non-commercial use. Any trademarks are the properties of their respective owners. More on Hyderabad, India. Jobs in Hyderabad.