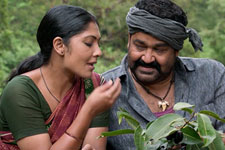 Swaroop Thotada / fullhyd.com
EDITOR RATING
5.0
Performances
Script
Music/Soundtrack
Visuals
6.0
4.0
4.0
6.0
Suggestions
Can watch again
No
Good for kids
No
Good for dates
Yes
Wait to rent it
Yes
Manyam Puli will easily become the least favourite film of those "Save The Tiger" campaigners. The film not only shows these feline wild animals being brutally hunted down, but also revels in that for glory. Of course, what choice does a film have when the most defining trait of its titular character is hunting tigers? And it's without a shred of any sense of irony that the film names him "Puli Kumar". That's because the film is decidedly oblivious to the necessity of being politically correct and just wants to serve uninhibited entertainment.

Puli Kumar (Mohanlal) is a simple-minded lorry driver in the fictional town of Puliyoor, but there is a lot more to him than meets the eye. That's not hard to guess if you have seen the promos or the trailer. He is the most skilled hunter of tigers in the area whom the village folks turn to whenever there is a stray tiger on the loose. And Puliyoor being a village bordering a deep forest is frequented by these unwarranted beasts whenever the film requires an action sequence.

Kamalini Mukherjee plays the grumpy wife Myna, who is averse to her husband's obsession with his hobby and nags him about it all day. So we see this humble yet ferocious hero go all family-man around his wife and loving daughter, cementing the film's ambitions to transcend its genre and appeal to the star's fans from multiple demographics. We even get a flashback detailing how he wooed his future wife, and Mohanlal's rotund frame and ageing face are not of any help to verisimilitude. His earnest performance rescues these scenes, which could have been outright awkward had they not been imbued with humour.

Just as you are starting to appreciate the humble and relatable side of the protagonist's characterization, a vamp, Julie (Namitha), is thrown in. Apparently even the most gravity-defying stunts, the borderline mythical characterization of the hero and the relentless deification of the star by the supporting characters still fall short without a vamp going gaga over the hero's muscles. Thankfully we don't get a song with her and it's a huge relief.

However, the film delivers on its main promise. The fights with the tigers are meticulously choreographed, and it helps that the CGI doesn't fall flat. Peter Heins is in his element here (and Mohanlal doesn't let him down at all), and is easily the best technician behind this movie, closely followed by the cinematographer Shaji Kumar. Kumar's camera ably contains the lush greenery of the forest and he captures the scenic visuals without showboating feats, and it matches the simplicity of the story.

But it's the story that lets the film down. All the tiger-hunting business doesn't make it into the main conflict which is provided by a very lazily scripted villain. Jagapathi Babu plays Daddy Girija (yes, we are not joking), a drug lord businessman who manipulates and eventually betrays Puli Kumar. Don't worry - this is not a spoiler because you realize Daddy Girija is onto something nasty the moment you see him. Sadly for Babu, the writing doesn't let him chew menace and spew malice, though that would have spiced up the weak drama. We have a hero before whom even the king of the jungle doesn't stand a chance, but he is confronted by an antagonist who is hopelessly out of his league.

The plot talks about loyalty, betrayal, double crossing, smuggling and ultimately humanity, but all these are rendered ineffective by being woven into a blatantly fabricated plot. That's why in the end when Puli Kumar remarks that at least animals are predictable but people stab from the back, he doesn't look like someone who stumbled upon an insightful revelation but like a callow person coming to terms with his naivete. Such platitudes appear totally in place in this film with a hammy background score, black and white characters, vamps and rope-aided stunts.

A Google search for Pulimurugan, the Malayalam original that this is a dubbed version of, will tell you that this film was a mammoth hit, and collected about Rs. 100 crores at the Kerala box office. So like it or not, mainstream still reigns and is here to stay.
Share. Save. Connect.
Tweet
MANYAM PULI SNAPSHOT 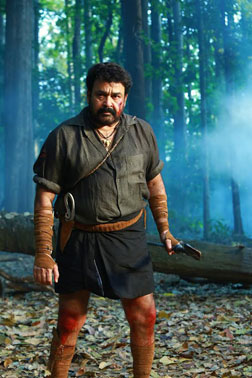 ADVERTISEMENT
This page was tagged for
manyam puli movie in telugu
manyam puli hero name
Manyam Puli telugu movie
Manyam Puli reviews
release date
Follow @fullhyderabad
Follow fullhyd.com on
About Hyderabad
The Hyderabad Community
Improve fullhyd.com
More
Our Other Local Guides
Our other sites
© Copyright 1999-2009 LRR Technologies (Hyderabad), Pvt Ltd. All rights reserved. fullhyd, fullhyderabad, Welcome To The Neighbourhood are trademarks of LRR Technologies (Hyderabad) Pvt Ltd. The textual, graphic, audio and audiovisual material in this site is protected by copyright law. You may not copy, distribute, or use this material except as necessary for your personal, non-commercial use. Any trademarks are the properties of their respective owners. More on Hyderabad, India. Jobs in Hyderabad.