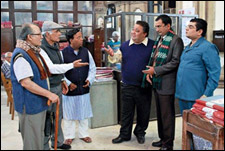 Nupur Barua / fullhyd.com
EDITOR RATING
6.0
Performances
Script
Music/Soundtrack
Visuals
6.0
6.0
6.0
6.0
Suggestions
Can watch again
Yes
Good for kids
Yes
Good for dates
No
Wait to rent it
No
Every Indian worth his salt has been taught that if you live in India, you have to make greed and bribery a part of your being. Corruption is a religion, and saying 'no' to bribery is sacrilegious.

So when one person decides to rebel against the system, people admire him, reluctantly, but cluck their tongues at his futile bravado, and predict his impending doom.

Mussaddilal Tripathi (Pankaj Kapoor), a retired schoolmaster, is one such brave soul. Declared dead by government officials, and having had his pension terminated, the little old man runs from pillar to post to rectify a mistake not of his doing, in order to prove his existence.

With his wife Shanta (Farida Jalal) dead and gone, and his son Bunty (Gaurav Kapoor) unemployed and dependent on him, Mussaddi is left with little choice, and initially buckles under the demands imposed by the government officials.

The movie begins on a promising note, when Mussaddi, arrested by the police, tells the police inspector that his crime is simple - he is a common man. This may strike a chord with millions of Indians who believe that being a common man is as good, or bad, as living under the shadow of a curse. The story then goes back to the time when it all started, with Mussaddi's wife falling ill.

From the doctors who let his wife die because they messed up her good kidney, to the train ticket collector who harasses them for forgery, to the priests who fleece him dry to perform the last rites, Mussaddi survives them all. The trouble begins when he has to prove that he is alive.

Comparisons with the original Office Office series are inevitable. To begin with, almost all the actors of the television show are a part of the movie - Manoj Pahwa as the gluttonous Bhatia, Sanjay Mishra as the spitting Shukla, Asawari Joshi as Ushaji who brings home chores to the office, Hemant Pandey as the senior official Pandey who insists on adding a "ji" to his name, and Deven Bhojani as the grouchy Patel. The original series placed these consistent characters in varied professions in each half-hour episode, and they became the cause of many tears of laughter.

However, when the movie attempts to get the same actors to play various parts, it can get confusing, since the protagonist is the same person throughout. For example, you have Patel (Deven Bhojani) as a ward boy, as a government official, as a priest and as a Collector, in one sequence after the other, and people not familiar with the show will wonder how Mussaddi and Bunty do not notice the eerie similarity between one Patel and the next - both in looks and in traits.

Pankaj Kapoor plays his role with ease, and showcases his talent as a retired school teacher. Gaurav Kapoor oscillates between sincere performances in certain sequences, and plain indifference in others. The bane of the movie has to be the actor who plays Mussadi's daughter. She looks clueless, and very conscious of the camera.

In keeping with the spirit of the movie, Makrand Deshpande plays various characters as he sings 'Chala Mussadi' at regular intervals.

A large portion of Chala Mussaddi - Office Office has been shot in Delhi, and those sequences establish the mood and feel of the place quite effectively. The film has more than a fair share of action taking place at India Gate, to renew feelings of patriotism and honesty, no doubt.

Not as funny as the television series, Chala Mussaddi is still a sincere attempt by Rajiv Mehra to make a meaningful film, with the much-needed social message - that one man can make a difference. To really enjoy the franchise, look for DVDs or re-runs of Office Office.
Share. Save. Connect.
Tweet
CHALA MUSSADDI OFFICE OFFICE SNAPSHOT