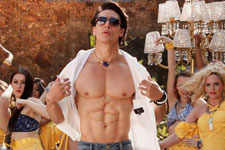 Nupur Barua / fullhyd.com
EDITOR RATING
5.0
Performances
Script
Music/Soundtrack
Visuals
6.0
4.0
5.0
6.0
Suggestions
Can watch again
Yes
Good for kids
No
Good for dates
Yes
Wait for OTT
No
Those amongst us who love Bollywood gossip have always known that Jackie Shroff has a son named Tiger. The proud father had, at one point, quite a few photo shoots with the toddler. Forgotten for a while, the boy resurfaced a couple of years ago when he began to socialise with the star kids of his generation. One look at his face, and everybody guessed he would become a hero.

What most of us did not guess was that he would star in a movie that would be a very, very obvious tribute/reference to his father's debut film, Hero. What we also did not know was that it would be so difficult to assess him - he cannot be written off, yet, but he also cannot be said to have made a smashing impression with his debut. More on that later.

Somewhere in North India (the place where all men are chauvinists and all women repressed), there is a small community in a small town/village who swear by honour and tradition - the two most abused concepts in that part of the country. The headman / head goon / mafia boss / zamindar of the place, Chaudhary (Prakash Raj), is the keeper of the faith, as it were. He has two daughters, whom he loves, but he must follow the rules and regulations of his community - and those include not letting them marry the man they want, not letting them interact with strange men, and so on.

Imagine his shock when his elder daughter Renu (Sandeepa Dhar) defies his choice of bridegroom for her and elopes with the love of her life, whose existence nobody really cared about. Enraged, Chaudhary decides to round up the errant boyfriend's pals to figure out the whereabouts of his beloved daughter.

One of those pals happens to be Bablu (Tiger Shroff). Bablu decides that this is the perfect time to tell his friends about Dimpy (Kirti Sanon), who happens to be Chaudhary's younger daughter. And it was love at first sight, he explains - because, really, is there any other route to true love, which is what this is?

Chaudhary wants these friends to assist him in his search for the wayward couple. It is a question of honour. Bablu has to help him, and he uses this time to get to know Dimpy better. However, when Chaudhary discovers that this young man has been whispering sweet nothings to his daughter, he begins to concentrate on teaching them a lesson, thus becoming the quintessential conflict in the love story.

Sabbir Khan and the writers must have decided, at some point during the conceptualisation of a movie that would be worthy of Jackie Shroff's son, that an issue-based plot would enhance the heropanti of the hero. Honour killing and the futility of the same may have seemed relevant then, but it now seems a bit stale. After all, we have seen enough TV shows and movies based on the issue over the past couple of years.

The narrative flows smoothly enough to be simple and straight, but relies too heavily on stereotypes to get its point across. Firstly, Bablu is a feminist, because heroes are all about treating women as their equals these days. You'd normally guess that if a character like Bablu really did exist in an environment like the one the movie is set in, he would be some sort of hero. If you knew more about the reality of such communities, however, you'd understand that such a character cannot possibly live to tell the tale of his heroism.

Secondly, in Hero, Jackie Shroff was a rebel. In Heropanti, Bablu mostly does things that are likely to make him come across as arrogant and stupid. Sensibilities have changed, and how, since Hero, so this idea of a young man defying society is somewhat dated. It may have worked better if the makers concentrated on making the boy be a part of the system to defeat the system.

The dialogues are whistle-worthy for those who miss and love the movies of the 1980s. There is also enough comedy here to elicit a smile or two. Chaudhary's dilemma is a nice touch, and even poignant, but the character is too erratic to sympathise with. In fact, it is Chaudhary, and not the Bablu-Dimpy pair, who keeps you guessing, and he becomes more intriguing with every passing sequence. And that is where the screenplay fails - it is not the journey of the protagonist, but that of the villain.

The love story between Dimpy and Bablu is pretty uninspiring. Of course, he fights people to win her hand and all that, but the chemistry is not really sizzling, and the lack of a journey towards true love makes the story flat. The screenplay follows the action-song-love-conflict-repeat pattern, and becomes repetitive.

Like most perhaps know by now or have guessed after reading this far, the movie is a remake of our own Parugu, which starred Allu Arjun as Krishna. Heropanti has been altered slightly to accommodate North-Indian sensibilities, but the basic premise remains the same.

Tiger Shroff could not have chosen a worse name than Bablu to debut with. This will be stuck with him for life. He does not look like a Bablu - or maybe he does, with his soft features, almond eyes, and very red lips. However, you need to be wary of writing him off because a few decades ago, another actor was laughed at for being fairer than his heroine. Today he is a star, and his name is Saif Ali Khan. (Weirdly, Tiger Shroff's looks have been compared with those of Kareena Kapoor, who is married to Saif Ali Khan.)

Tiger is very good with his action, and has the most flexible body since Hrithik Roshan. His acting leaves a lot to be desired, though, and his voice and personality do not help. Yet, he is endearing in many ways. If only he did not smirk like an idiot throughout the movie - that becomes a little grating.

Kirti Sanon, on the other hand, is a natural. She needs to polish her diction and her acting skills a little more, but she will eventually get her due as a star, provided she makes some good choices. She does go a little OTT with her reactions as Dimpy, and tries too hard to look innocent, but something tells you that she will learn to be more convincing.

As for Prakash Raj, who reprises his role from Parugu - the man is still full of surprises. He may need to cut down on his angry-eyed stares and his comic-villain act, but he also shows a range of emotions that he has not done in Hindi films so far. He is easily the scene stealer in this movie.

The setting is rather ambiguous, and the production design is a mish-mash of everything stereotypically "North Indian", but in a movie like this, it works. Some of the sets are reminiscent of those in Rohit Shetty's movies, and there are no prizes for originality here, but the world is believable enough. The costumes, on the other hand, are slightly outlandish - glamourised versions of what small town people or villagers would wear. They end up looking quite fantastical, and unbelievable.

The cinematography is very good in the action sequences, although also very gimmicky. The intention is to concentrate on the martial arts expertise exhibited by Tiger Shroff, or so it seems. The director of photography seems less interested in normal sequences, which are shot in an almost lazy and indifferent manner.

The songs are average, and the flute theme from Hero gets on to your nerves after a point. Surely the many music directors in the movie could have come up with a more original theme for the protagonist?

As with the camera work, the editing is near perfect during action sequences, but otherwise it appears almost uncaring.

The fact that Jackie Shroff's son is now a hero should make you curious enough to check out Heropanti. There is no reason for you to expect anything more than a masala film with a predictable story line, nor should you expect to come out awed by the young boy (as you were by the father), but it is worth a watch. Just another commercial movie with plenty of high speed action sequences, Heropanti may not be an eternal love story, but there is hope yet, for both the actors.
Share. Save. Connect.
Tweet
HEROPANTI SNAPSHOT 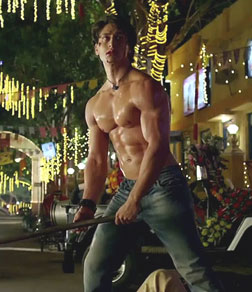 ADVERTISEMENT
This page was tagged for
Heropanti
heropanti
Heropanti hindi movie
Heropanti reviews
release date
Follow @fullhyderabad
Follow fullhyd.com on
About Hyderabad
The Hyderabad Community
Improve fullhyd.com
More
Our Other Local Guides
Our other sites
© Copyright 1999-2009 LRR Technologies (Hyderabad), Pvt Ltd. All rights reserved. fullhyd, fullhyderabad, Welcome To The Neighbourhood are trademarks of LRR Technologies (Hyderabad) Pvt Ltd. The textual, graphic, audio and audiovisual material in this site is protected by copyright law. You may not copy, distribute, or use this material except as necessary for your personal, non-commercial use. Any trademarks are the properties of their respective owners. More on Hyderabad, India. Jobs in Hyderabad.