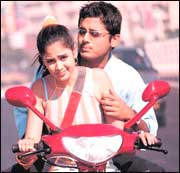 Deepa Menon / fullhyd.com
EDITOR RATING
5.0
Performances
Script
Music/Soundtrack
Visuals
NA
NA
NA
NA
Suggestions
Can watch again
NA
Good for kids
NA
Good for dates
NA
Wait to rent it
NA
Here's a notion in filmdom that's termiting its way to the top: screw fresh ideas. Instead let's take an old, moth-eaten one and amp it up real good - sound, graphics, general clamor, the whole hoggity-hog. Then let's take this tale of endless din and flying sweat and give it a really cool name. Throw in some snazzy threads, a mo'bike or two, a couple of super fast songs with - what's that the kids are into these days - that's right, hip-hop beats and wrap it up with easy laughs all around. A film, ladies and gentlemen. Yours for the faking.

The good thing about Sye is that it pretends to be nothing more, which means you can't diss it for lack of ambition, when it is this very lack that it trumpets. The story is set on a campus that's dictated by two rival groups: the arts and the sciences. The two gangs hate each other so much that when they meet in corridors or in the parking lot, there is much glaring and gnashing of teeth. Just so you appreciate the depth of the feud, the entire first half of the film is dedicated to it. Scores are settled in the usual filmi way - sarcasm, sports and the fondling of girls.

Our hero is the head of the sciences group, the Wings, and he's in love with a member of the arts gang, the Claws (Bird-Brains was dismissed as being too generic). The love story between Nitin and Geneelia is very charming, but out of respect to those of our readers with sensitive gag reflexes, we won't go into details. We'll instead concentrate on the other active ingredient - rugby.

Now, Nitin (our hero) plays rugby and he's the best player on campus, but even he can't score without a goalpost. It turns out that the much beloved college, and the adjoining rugby field, is illegally grabbed by a local goonda by the name of Bhikshu Yadav. There's no alternative but for the students to join forces and fight the bad guy, a man who doesn't balk at the idea of larceny, murder or even politics.

The second half of the film is better than the first, in that it's closer to the end. But the tempo does pick up, which is always a good thing in a three-hour movie. The gang of students, who now call themselves the Eagles, manages to oust the wicked Yadav from power, close down his liquor shops and even do significant damage to his sex life. Enraged and foul-mouthed, Yadav challenges the bachchas to a game of rugby, winner takes all.

Speaking of foul-mouthed, the censor-board seems to have snoozed right through the screening of Sye (not that we blame them). The film is resplendent with, shall we say, indelicate references to everything they didn't teach you in Moral Science class. These students flip the bird like it's a style statement of some sort, plus there's lots of swearing and general re-directing to places where the sun doth not shine. The only reason the movie works is that it gets its act together in the last couple of sequences and whips up enough excitement for the final rugby match, so you get involved even though you know how it will end. Utterly predictable, utterly wannabe, utterly out of it. But hey, it still keeps 'em coming.

ADVERTISEMENT
This page was tagged for
Sye Telugu movie review
sye movie review
Sye telugu movie
Sye reviews
release date
Follow @fullhyderabad
Follow fullhyd.com on
About Hyderabad
The Hyderabad Community
Improve fullhyd.com
More
Our Other Local Guides
Our other sites
© Copyright 1999-2009 LRR Technologies (Hyderabad), Pvt Ltd. All rights reserved. fullhyd, fullhyderabad, Welcome To The Neighbourhood are trademarks of LRR Technologies (Hyderabad) Pvt Ltd. The textual, graphic, audio and audiovisual material in this site is protected by copyright law. You may not copy, distribute, or use this material except as necessary for your personal, non-commercial use. Any trademarks are the properties of their respective owners. More on Hyderabad, India. Jobs in Hyderabad.