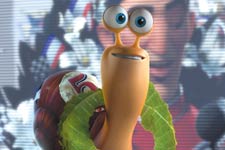 Swayamsrestha Kar / fullhyd.com
EDITOR RATING
6.0
Performances
Script
Music/Soundtrack
Visuals
6.0
5.0
6.0
7.0
Suggestions
Can watch again
No
Good for kids
Yes
Good for dates
No
Wait to rent it
Yes
Sometime during the film, a character exclaims out loud - "Has the world lost its mind?", and we found ourselves nodding in agreement. We're people who are willing to pay good money to watch a snail... let us repeat that for you... a SNAIL... take part in competitive car-racing.

After all, we're the people who paid good money in the past to watch a bee sue humankind for stealing honey from bee-hives (Bee Movie), and to cheer a rat who wants to be Masterchef Rodent-ia. So, to answer the incredulous character's question - we're all masters at losing our minds. We've had tons of practice, you see.

And there, right there, is the basic flaw in the premise of Turbo 3D. There are underdog stories, and there are underdog stories, and then there's also a thing called logic. Hollywood makes a habit of treating logic like it's a well-worn-out billiard ball, which movie-makers then use to play beach volleyball with. It started out being fun, but of late, Dreamworks, it's gotten a tad repetitive.

The story of Turbo 3D is simple - snail wants to race, and dreams of participating in the Indianopolis 500 car race. Snail declines big brother snail's advice to see the resident shrink. Snail goes loco eventually, and is locked up in the mollusc equivalent of a padded cell until he regains some good sense. Brother snail goes on to become a successful counseling guru in the snail community.

Theo (voiced by Ryan Reynolds) is a snail who normally drifts along the loony spectrum of the "need for speed" channel. He's obsessed with car-racing, and spends hours drooling over Guy Gagne (voiced by Bill Hader) - the leading (human) racer in the Indianopolis 500 contest. Theo's community of tomato-farming snails think that he must have bumped head-first into a lot of walls.

His sensible brother Chet (voiced by Paul Giamatti) is looking out for him, when he's not busy berating Theo's lack of a functional brain, and sometimes, he's doing both simultaneously.

Through a series of accidents (sequences of which are a strong nod to the Fast And Furious movies), Theo comes to acquire superpowers which make him the mollusc equivalent of that obnoxious kid from The Incredibles.

Theo re-christens himself as Turbo. Because, duh, that's what you really do after you've got superpowers. You get yourself a cooler name.

Anywho, Turbo's penchant for speed is "discovered" by a couple of no-good humans at a seedy run-down market complex, and they cling on to his obvious star value, to attract the customers.

The tides of public recognition (viral Youtube videos are the new PR mean machines) are strong enough to carry him to the tracks of the Indie 500, and from then on, it is a shameless high-speed drive fueled by adrenaline and the sheer joy of cheering the underdog on.

The movie might have a tried-and-tested-to-death plot, but that shouldn't take away from the fact that the whole thing has its moments of sparkling humor ("snailed it", for example), mushiness of the heartwarming persuasion (Theo and Chet's brother-aderie), and sleek action scenes (the racing sequences are a treat).

However, the plot drags for more time than is necessary, and the dialogues could have been upgraded a lot, and AT a lot of places.

Dreamworks lives up to its reputation of having done some of the best animation known to film audiences. The frames are colorful, and vibrant. There's the trademark Dreamworks spontaneity of sequencing. But then, there's the 3D.

The 3D is almost damagingly superfluous. Movie-makers need to realise that 3D technology, when used, should help in fleshing out the visuals, and should add to the whole experience of watching a movie. However, in Turbo, the 3D was honestly of the interfering sort. It wasn't incorporated well into the animation, and it was NOT required. We hope you're taking copious notes, animators.

The music is a surprise, because the soundtrack features a lot of hip-hop, and some of the songs are not exactly what you'd like your kids to grow up on.

Ryan Reynolds does a fine job of portraying a mix of the average stubborn dreamer and a vulnerable soul who sometimes questions the sturdiness of his faith. Paul Giamatti is adorable as Chet, Theo's brother who has perfected the art of being a realist.

There's also a group of roguish snails - headed by Whiplash (voiced by Samuel Jackson) - who share Theo a.k.a. Turbo's obsession for racing. Among the human characters, Tito (voiced by Michael Pena) and Angelo (voiced by Luis Guzman) are the ones whose relationship most closely resembles that between Theo and Chet.

The movie does make poignant statements about the stark contrast between the dullness of being persistently realistic, and the grandeur of nurturing impossible dreams. No matter how sensible we believe we are, we still find ourselves cheering for Turbo when he gears up and tears down the race-track.

And there, right there is when we realise why we are content with bidding adieu to logic so often. In order to dream impossible dreams, we kind of need to do so, don't we?
Share. Save. Connect.
Tweet
TURBO (3D) SNAPSHOT 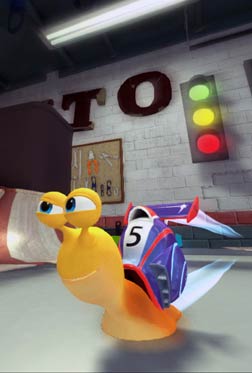 ADVERTISEMENT
This page was tagged for
Turbo (3D) english movie
Turbo (3D) reviews
release date
Ryan Reynolds (Turbo), Paul Giamatti (Chet)
theatres list
Follow @fullhyderabad
Follow fullhyd.com on
About Hyderabad
The Hyderabad Community
Improve fullhyd.com
More
Our Other Local Guides
Our other sites
© Copyright 1999-2009 LRR Technologies (Hyderabad), Pvt Ltd. All rights reserved. fullhyd, fullhyderabad, Welcome To The Neighbourhood are trademarks of LRR Technologies (Hyderabad) Pvt Ltd. The textual, graphic, audio and audiovisual material in this site is protected by copyright law. You may not copy, distribute, or use this material except as necessary for your personal, non-commercial use. Any trademarks are the properties of their respective owners. More on Hyderabad, India. Jobs in Hyderabad.