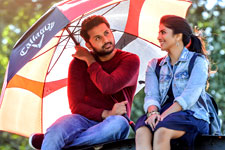 Veturi Sarma / fullhyd.com
EDITOR RATING
5.5
Performances
Script
Music/Soundtrack
Visuals
5.0
3.0
6.0
7.0
Suggestions
Can watch again
No
Good for kids
Yes
Good for dates
Yes
Wait for OTT
Yes
And a half star just for telling everyone that it's Megha and not Mega. That little phonetic correction could just be the most important thing to come out of this film; it could even justify the existence of what is otherwise a forgettable fare.

Any hopes you have from Chal Mohanaranga are immediately thwarted by the utterly implausible sequence (one that can only be born from the imagination of a Telugu movie writer) where Mohan Ranga (Nitin) gets a visa to travel to the United States to meet his childhood sweetheart Megha Subramanyam (Megha Akash). He doesn't know who she is, but that is the least of his problems upon his arrival.

He has no grades, no money and no redeeming qualities to land himself a job, and relies on borrowed money to get through the day, but has no intention of returning to India without meeting the woman of his dreams. He has one incredible quality, though. He can fall on the feet of literally anyone and bawl till they give in to his wishes. Surprisingly it helps him get through most of the first half, including getting on a road-trip with his girl.

They go around the country and Mohan soon gets a job at the behest of his friend Vilas (Madhu Nandan). Eventually they start developing feelings for each other, but their friends (Madhu Nandan and Ashu Reddy) play spoilsport and plant doubts in their minds that they may not be perfect for each other. The conflict is really vague, almost a mishmash of differences in social status, attitudes, personalities, likes and dislikes, with even dowry thrown into the mix so that the writers can't be accused of not thinking up every possibility.

The pair never talk about it and decide to go their separate ways - Megha to Coonoor to marry the man chosen by her parents, and Mohan carrying on his merry ways in the US - until an epiphany gets Mohan to decide to go to Coonoor. The script then piles upon the coincidences and develops and discards sub-plots with aplomb, and the narrative falls all over itself trying to prove that everything was a sign all along that these two were destined to be together. And everyone goes home happily with Rao Ramesh (the bridegroom's father) shown to be the sucker.

Chal Mohan Ranga aspires to be that breezy romance everyone wants to see just to relive the charm of the good old love story. Only, the film is neither breezy nor romantic. It merely has the mandatory plot points in a boy-meets-girl story, with the writing often falling back on the safety of comedy tracks involving unnecessary characters. Indeed, the film does not seem as keen on building moments between the lead pair as it does on writing one-liners with praasa for its support cast.

The romance suffers from all of this, which is a pity because there really are several moments where the film could have been more about the lead pair, but it squanders each of them by cutting away to a fight or a comedy scene. For what it is, the film just remains an assembly of beautiful post cards embellished with a comic track.

Nithin does alright but never puts anything of himself into his character and carries through the whole film with a this-is-what-I-was-given expression. Megha Akash on the other hand, apart from looking like a million bucks, appears eager to perform and brings the required vivaciousness to the role, but is short-charged by the writers in this vapid romance.

Trivikram is credited with the story, yet it is the dialogues that carry the man's mark all over - and of course, that is not a bad thing at all. It is not clear quite why the film should be set in US and Coonoor, but the cinematography of Nataraj Subramanian (Natty) renders the setup to the film's advantage with his vibrant and moody visuals. The makers spent a bomb on this and it clearly shows in each of its frames. Thaman's music does no disservice to the movie whatsoever.

In all, despite having plenty going for it from a good-looking lead pair to exceptional character artistes and quite a few well-written gags, Chal Mohan Ranga somehow leaves you with a feeling of what it could really have been. Wait for it to stream on Amazon Prime - it should be up there soon.
Share. Save. Connect.
Tweet
CHAL MOHAN RANGA SNAPSHOT 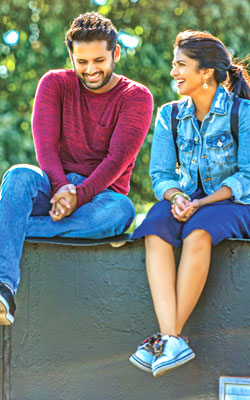 ADVERTISEMENT
This page was tagged for
Chal Mohan Ranga telugu movie
Chal Mohan Ranga reviews
release date
Nithin, Megha Akash
theatres list
Follow @fullhyderabad
Follow fullhyd.com on
About Hyderabad
The Hyderabad Community
Improve fullhyd.com
More
Our Other Local Guides
Our other sites
© Copyright 1999-2009 LRR Technologies (Hyderabad), Pvt Ltd. All rights reserved. fullhyd, fullhyderabad, Welcome To The Neighbourhood are trademarks of LRR Technologies (Hyderabad) Pvt Ltd. The textual, graphic, audio and audiovisual material in this site is protected by copyright law. You may not copy, distribute, or use this material except as necessary for your personal, non-commercial use. Any trademarks are the properties of their respective owners. More on Hyderabad, India. Jobs in Hyderabad.