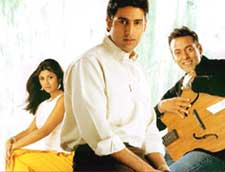 Deepa Menon / fullhyd.com
EDITOR RATING
7.0
Performances
Script
Music/Soundtrack
Visuals
NA
NA
NA
NA
Suggestions
Can watch again
NA
Good for kids
NA
Good for dates
NA
Wait to rent it
NA
When Revathy got down to penning the story of her first 'commercial' film, which audience did she have in mind? The carefully misguided youth of today? Or the more evolved, more sensitive souls of SEC-A? Gum-chewing cads lurking in red-light areas of darkness? Or their better-disguised, upwardly-mobile counterparts? Phir Milenge has something to say to all of them, but they won't all stay around to listen.

Simply because the movie requires you to meet it halfway. To be a little indulgent of its occasional departures from logic, its languid - sometimes bordering on laborious - pace, and its weakness for the picturesque. This last detail is easy to forgive, the others not as much. The film is about HIV, true. But the director's kept her promise, and doesn't preach, for the most part.

And Phir Milenge is like Jonathan Demme's Philadelphia, but where the former was about prejudices, raw and stark, the latter softens, blurs, artistically fades out.

Tamanna (Shilpa Shetty) is part of the Bangalore yuppie brigade, with a high-pressured, high-paying job, and a doting father-figure for a boss. While her professional life is as perfect as can be, her personal life leaves something to be desired. Namely, Rohit Manchanda (Salman Khan).

An old flame from art school, Rohit walks into Tamanna's life at a reunion. They pick up from they left off, and go a good deal further. They even manage an unofficial saath phere. After a promise to meet again, they part, with no forwarding address. This might have been quite tragic in itself, but then seven months later, Tamanna is diagnosed HIV+. And like that is not tragic enough, her daddy-bear of a boss reacts to her illness with the thorough ignorance of the thoroughly educated. He fires her.

Stung and shocked, Tamanna wallows in the dregs for a while and then comes up fighting. The decision to sue her ex-employer was easy to make, but no lawyer will touch her. Literally. Then corporate lawyer Tarun (Abhishek Bachchan) walks in, and quickly walks out again, because man, he won't be messin' with no AIDS patient. Once he sees the light, however, he jumps on board.

Tarun's sudden change of heart is one of the burrs in Phir Milenge's logic. It's not entirely clear how or why he went from being King Of Jerks to Knight Of Justice. The rest of the film pieces together Tamanna's fight with the archaic Indian Law, but it's also about her making peace with the diseased love of her life, Rohit. And if the director miscalculates anywhere, it's here.

You can't open a ticking bomb of a topic like this one, reveal deep-seated prejudices, throw up disturbing questions about inadequate laws, and then bring the focus back to the love story. It doesn't happen.

Where Phir Milenge trumps is with its understated screenplay and performances, not least of all by Naseer playing a free-spirit lawyer and Tarun's mentor, and Mita Vashisht as the shark of a defense attorney. Of the lead trio, Shetty does the best job, while Salman and Bachchan Jr. don't make much of impact.

It would be churlish to blame Phir Milenge for being too good looking, but we will blame it for not making up its mind. It's a heartfelt attempt, and it could have been more.

ADVERTISEMENT
This page was tagged for
Phir Milenge hindi movie
Phir Milenge reviews
release date
Shilpa Shetty, Abhishek Bachchan
theatres list
Follow @fullhyderabad
Follow fullhyd.com on
About Hyderabad
The Hyderabad Community
Improve fullhyd.com
More
Our Other Local Guides
Our other sites
© Copyright 1999-2009 LRR Technologies (Hyderabad), Pvt Ltd. All rights reserved. fullhyd, fullhyderabad, Welcome To The Neighbourhood are trademarks of LRR Technologies (Hyderabad) Pvt Ltd. The textual, graphic, audio and audiovisual material in this site is protected by copyright law. You may not copy, distribute, or use this material except as necessary for your personal, non-commercial use. Any trademarks are the properties of their respective owners. More on Hyderabad, India. Jobs in Hyderabad.