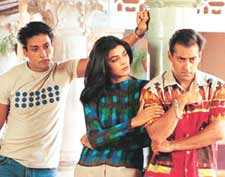 Hum Tumko Na Bhool Payenge by director Pankaj Parashar makes you realize that you still haven't seen the craziest of them all. The whale of a tale goes this way. Veer (Salman Khan) is the son of a rich Thakur. His most significant other credential is that he is love with the village damsel, Muskaan (Diya Mirza).

They live happily in peace and in palatial houses. Their marriage and promises of happy settlement in the lore and lush of the resplendent village would have concluded the flick much to the relief of everybody. But for the fear of digging a hole in the World Bank funds to such revelations of rustic bliss, the story is shifted to safer pastures.

At his wedding, Veer is visited by some underpaid overabused assistants of the bad guy of the village. After a lot of topless Salman gnashing and crashing people, it is revealed that he is not the real son of the thakur but a lost and found case of that highly dependable amnesia.

Veer now raves to discover his past and ends up in Mumbai. The post interval is a high-frequency ballast with bullets and bikes taunting at the peak sensitivity of your ears. And all done in the best possible trite splendor, lest you harbor any illusions of being in the presence of directorial geniuses.

Veer recalls being an Ali before he lost his memory, and also remembers his fiancée Mehak (Sushmita Sen) and friend Inder, who had got married at the drop of a hat behind Veer's back. As if Veer realizes that a late-inning prayer is highly recommended to drag his career to the next movie, he offers onscreen namaaz as often as possible.

It transpires that Veer and Inder had worked as unofficial hitmen to assist the commissioner of a highly inadequate and worthless police. The Chief Minister of the state arranges an Everest-climbing-rope-throwing-stunt involving Veer hitting him at a public meeting. All to sop up some of the vote bonanza gravy. And that's when the act gets sour. The CM is killed and Salman has to watch his back. Friend Inder, who turns out to be an authority-hating-necrophile, tries to kill Veer.

Back to the present, and a lot of barely-clad Salman fighting in the intelligence-insultingly-choreographed sequences. Finally, Muskaan's true-love-for-ever is saved from reaching a heart wrenching end, when Mehak safely dies.

So if you got the idea about what it all was in heed of, do write to us. Though Sushmita Sen, with her flinty sensual accent, instills some sanity to the crazy plot, Diya appears in serious need of tremendous enlightenment about a remote thing called acting. Salman is his usual tall and endearingly modestly-covered self with a technicolor sense of dressing. The last we heard, he was spotted with a book called 'How To Improve Moronic Minds of Zero IQ thickoes'.
Share. Save. Connect.
Tweet
TUMKO NA BHOOL PAAYENGE SNAPSHOT

See Tumko Na Bhool Paayenge full details
TUMKO NA BHOOL PAAYENGE USER REVIEWS
1 - 7 OF 7 COMMENTS
POSITIVE  |  NEGATIVE |  NEWEST  |  OLDEST  |  MOST HELPFUL  |  LEAST HELPFUL
USER RATING
4.2
37 USERS
Performances
Script
Music/Soundtrack
Visuals
NA
NA
NA
NA
Can watch again - NA
Good for kids - NA
Good for dates - NA
Wait to rent it - NA
Arpan on 11th Mar 2002, 9:47am | Permalink
Wow! The Salman Khan hate club... could I join... please... pretty please?!
RATING
2
Sohail Khan on 9th Mar 2002, 1:51am | Permalink
VeryGood !!!!1
RATING
10
Khan Abdul Mateen on 4th Mar 2002, 2:04pm | Permalink
I see only to Salman not the film & I like his dresses & Personality. Salman is the best hero in the Bollywood, we like forever.
RATING
10
RIZWAN HASMI on 4th Mar 2002, 11:59am | Permalink
Who cares about the movie or story, we care for salman, Hi guys see here is one guy in our whole bollywood who comes at least close to resemble the famous Hollywood hunks like Bruce Willis and Mil Gibson. His acting is also quite good. As far him going shirtless, I don't know what's the big deal; any guy worth his salt and having such a chiseled body naturally wants to exhibit the assets.
He is a perfect model for all Indian males who want to aspire a body and face like him, including me!!!
RATING
10
Ameerah Islam on 2nd Mar 2002, 9:03am | Permalink
Ya Allah ..... Help me.. from watchin such movies
RATING
2
Mohd Khan on 1st Mar 2002, 3:59pm | Permalink
The movie to me is excellent because salman has acted very well and the screen play is good, music is again hit, and most of all salman is playing a muslim guy's role which performs prayers. (Little bit of mistakes like he wears gold and his chacha hugs susmita) Overall very good.
RATING
10
Abdul Masih on 26th Feb 2002, 7:39pm | Permalink
Movie sucks big time.
RATING
2
LEAVE A COMMENT
fullhyd.com has 700,000+ monthly visits. Tell Hyderabad what you feel about Tumko Na Bhool Paayenge!
MORE MOVIES
Latest Reviews
The 355
83
83 - Telugu
Shyam Singha Roy
The Matrix Resurrections - H...
more
The Matrix Resurrections
Pushpa: The Rise - Hindi
Pushpa: The Rise
Spider-Man: No Way Home
Spider-Man: No Way Home - Hi...
Spider-Man: No Way Home - Te...
Chandigarh Kare Aashiqui
Akhanda
Satyameva Jayate 2
Ghostbusters: Afterlife
Contemporary Reviews
Syriana
Asthram
Jawani Diwani
The Myth
The Myth - Veer Yodha
more
The Wicker Man
Apaharan
Krrish
The Sentinel
The Fast And The Furious - T...
The Break-Up
Zindaggi Rocks
Pyaar Ke Side Effects
Khosla Ka Ghosla
Random Reviews
Style (Telugu)
Unfaithful Wife
Escape From Taliban
C U at 9
Spiderman 3 (Hindi)
more
Luck By Chance
Clash Of The Titans
Kashmakash
The Avengers
Fast & Furious 6
Eduruleni Alexander
Insurgent (3D)
Thodari
Insidious: The Last Key
Mission Mangal
SEARCH MOVIES
Dissatisfied with the results? Report a problem or error, or add a listing.
ADVERTISEMENT
SHOUTBOX!
{{todo.name}}
{{todo.date}}
[
ip{{todo.ip}}
]
{{ todo.summary }}... expand »
{{ todo.text }} « collapse
First  |  Prev  |   1   2  3  {{current_page-1}}  {{current_page}}  {{current_page+1}}  {{last_page-2}}  {{last_page-1}}  {{last_page}}   |  Next  |  Last
{{todos[0].name}}