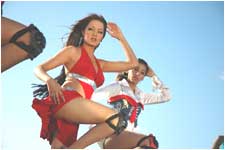 Priyanka Pulla / fullhyd.com
EDITOR RATING
3.0
Performances
Script
Music/Soundtrack
Visuals
NA
NA
NA
NA
Suggestions
Can watch again
NA
Good for kids
NA
Good for dates
NA
Wait for OTT
NA
Heard of the limited-edition swimsuit calendar Kingfisher is shooting this year in Australia? 6 models, 22 designers, 4 locales etc.? Jawani Diwani can be completely described in statistics like that. A portfolio, if you please, of bikini-ed women shot just for viewing pleasure. They aren't saying anything; it's not strung in a tale either. It's just, flip the page, and lookie lookie! Another knockout in a two-piece!

One thing Jawani Diwani cannot claim is that the semi-nudity was because the plot demanded it. On the contrary, the plot IS semi-nudity. The plot is bare-naked ladies. For each of the two words in its title, this schtick has one hour of as many varieties of girls as possible, stuffed together like an overfull wastebasket. And for all these stunners, it has one single bottom-dwelling, scum-filled, commitment-phobic, douche bag who leaves you completely cold. That's right - Man Kapoor, played by Emraan Hashmi.

Of course, Jawani Diwani is supposed to be a light-hearted comedy. As the plot goes, Man Kapoor is a struggling singer who cannot get enough eyefuls of female thoraxes. These females, in return, also seem to be sympathetic to his cause, and so, wear archaic, rather than modern, necklines. Kind of like 1900 century Cretes. Or - ahem - African Bushmen. No, we might be exaggerating here, but they do try to compete hotly. So they wear seam-splittingly tight dresses and bikini-tops that seem to be crying out for re-inforcement.

Between staring like he is waiting for those tops to pop, Man Kapoor takes the art of double entendre to new heights. 'Khul gaya' is a much-milked line in the movie, forcibly applied to every object that lends itself even vaguely to opening, like doors, clothes, fate etc. Audiences can't help but laugh at these and other one-liners.

So anyway, Man Kapoor chances upon Radha (Hrishita Bhatt), whom he immediately zeroes in on as a prospective fiancée, since she is the daughter of a music producer tycoon who can fix his career and make him rich, too. In between are characters who take potshots at some famous names - Manu Malik who keeps coming up with a song every second, Ram Kripal Varma the director, Mallika Shararat the aggressive flirt, and so on.

So Man Kapoor gets Radha to fall in love with him, and to celebrate his engagement, pushes off with his friends to Goa. There he makes out with a gorgeous Roma Fernandez (Celina Jaitley), a dancer, and her jealous admirer Chappu Dada (a brilliant Mahesh Manjrekar) forces them to marry, out of spite.

At the first chance, Man Kapoor ditches Roma and comes back to Radha. But then, during a music album shoot where Roma is an actress, he realizes he loves Roma after all. And gets back with her.

This juvenile story goes on for two hours, with all the innuendo interspersed with periods of oppressive silence. There are lighthearted stories, but this one is a lightweight story. It barely grazes the top of your mind, and in retrospect, becomes as foggy as Catamine-induced disorientation.

Mahesh Manjrekar is the one guy who is truly hilarious as Chappu Dada, and his inherent comic timing blends with the simplistic jokes, rising above the threshold of acceptability of the movie. For the others, whether Man, Radha or Roma, the humor is the life jacket that keeps you afloat in a sinking boat. You are not thankful, because you didn't ask for such a lousy movie in the first place.

As for the songs, there is one every fifteen minutes, and many of them are innovative with their melodies. The tunes use dissonance and whispered lyrics, rather a novelty in Hindi music.

To sum it up, if it is sun and sand and smooth bodies you are looking for, Jawani Diwani is dead on the mark. The humor will then come to you as an added bonus. But if it is a real movie you are expecting to see, don't even think about it. By no stretch of imagination, and by no twisted definition, is this some kind of cinema. Just 2 hours of frames of hot bods, pasted onto a movie reel.
Share. Save. Connect.
Tweet
JAWANI DIWANI SNAPSHOT

ADVERTISEMENT
This page was tagged for
Jawani Diwani hindi movie
Jawani Diwani reviews
release date
Emraan Hashmi, Hrishita Bhatt
theatres list
Follow @fullhyderabad
Follow fullhyd.com on
About Hyderabad
The Hyderabad Community
Improve fullhyd.com
More
Our Other Local Guides
Our other sites
© Copyright 1999-2009 LRR Technologies (Hyderabad), Pvt Ltd. All rights reserved. fullhyd, fullhyderabad, Welcome To The Neighbourhood are trademarks of LRR Technologies (Hyderabad) Pvt Ltd. The textual, graphic, audio and audiovisual material in this site is protected by copyright law. You may not copy, distribute, or use this material except as necessary for your personal, non-commercial use. Any trademarks are the properties of their respective owners. More on Hyderabad, India. Jobs in Hyderabad.