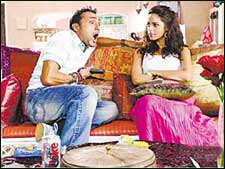 Samrat Sharma / fullhyd.com
EDITOR RATING
6.0
Performances
Script
Music/Soundtrack
Visuals
NA
NA
NA
NA
Suggestions
Can watch again
NA
Good for kids
NA
Good for dates
NA
Wait to rent it
NA
Pyaar Ke Side-Effects is a big contradiction in itself. The majority of the viewers interested in a Mallika Sherawat film are not looking for smart, slick urban romantic comedies. Which means that the entire onus lies on the shoulders of Rahul Bose, the staple of urban romantic diets of the movie variety, to pull in the right kind of crowds.

Both kind are in for a big surprise. Admittedly, this is my first Mallika Sherawat film, and aside from the first scene where she is obviously discomfited, she carries the film on her, um, shoulders, you perverts, with a maturity that I expected of Bose.

Second surprise, Billy. Rahul Bose hams his way through most scenes, and only rises to the level of not-too-bad in some moments. Evenly throughout the film, he has moments that have the potential to be a decent story-telling device, and he delivers to an extent. But the rest of the film requires him to be Rahul Bose, and he can't be that.

That does not mean to say that the script is demanding or the film exceptionally challenging. This is a frothy, fun romantic comedy, which borrows liberally from repeated plot devices and narrative elements of the "Hollywood RomCom factory", and ends up being a film you have seen plenty of times in English, but not very often in Hinglish, making it a fun ride. Protagonist is a fun, everyday commitment-phobic guy who talks to the camera? Check. Commitment-seeking girlfriend? Dad who hates the boy's guts? Goofball friends? Sage advice dispensing Mom? Hateful Jock who covets said girlfriend? Check, check, double check.

Sid (Bose) is a short, middle-aged DJ who tries to convince Delhi girl Trisha (Sherawat) to not flee her wedding. She flees anyway, they meet in Mumbai, and girl gets munted over a few drinks. They kiss, and three years on, their lovely relationship gets the inevitable marriage question - Trisha proposes (during a crucial cricket match, damn her), and our commitment-phobic DJ reluctantly says yes.

The film merrily takes off from there, delivering oddball characters, relate-able circumstances, and grin-worthy jokes with a certain even-handedness that surprises. Saket Chaudhary handles the film like a pro, with no line, joke or character out of place. The narrative and the fun factor are paramount, and film constantly delivers. That said, it is not a guffaw-out-loud film, or even one with a relevant message like Munnabhai. This film makes no pretenses. It is a frivolous, fun romantic comedy that intends to keep you grinning, and that is what it does.

Specially mention-worthy are Ranvir Shorey and Aamir Bashir as Sid's roommate and brother-in-law, respectively. While Shorey is simply brilliant as the loud and juvenile Nanoo, Bashir enunciates his funny lines with the characteristic bravado of a seasoned comedian, and it instantly makes his lines fresh.

Others in the supporting cast are natural, and instantly likeable. Small touches about the observations on cosmopolitan life abound throughout the film, and combined with the above-mentioned supporting cast, it lends the film a certain merriment, which it wields with levelheadedness, and does not falter. There are some maudlin moments in the second half, but they serve their purpose, and thankfully get over soon enough to let the gags take over.

A warning before you rush to buy tickets - most of the gags and lines in the film are not what you have not heard/read in countless films, SMSes and e-mail forwards. But the responsible performances that never take themselves seriously, and the well-handled pacing of the narrative keep you smiling.

Go expecting a fun time with your friends (especially the married/committed ones), and you will not be disappointed. No one is obviously expecting a searingly original comedy out of this anyway. Bottomline - if you have watched Munnabhai, go for Pyaar Ke... I promise paisa-wasool.

Now, a word for the panting Miss Sherawat fans - yes, she does look hot.
Share. Save. Connect.
Tweet
PYAAR KE SIDE EFFECTS SNAPSHOT

ADVERTISEMENT
This page was tagged for
Pyaar Ke Side Effects hindi movie
Pyaar Ke Side Effects reviews
release date
Rahul Bose, Mallika Sherawat
theatres list
Follow @fullhyderabad
Follow fullhyd.com on
About Hyderabad
The Hyderabad Community
Improve fullhyd.com
More
Our Other Local Guides
Our other sites
© Copyright 1999-2009 LRR Technologies (Hyderabad), Pvt Ltd. All rights reserved. fullhyd, fullhyderabad, Welcome To The Neighbourhood are trademarks of LRR Technologies (Hyderabad) Pvt Ltd. The textual, graphic, audio and audiovisual material in this site is protected by copyright law. You may not copy, distribute, or use this material except as necessary for your personal, non-commercial use. Any trademarks are the properties of their respective owners. More on Hyderabad, India. Jobs in Hyderabad.