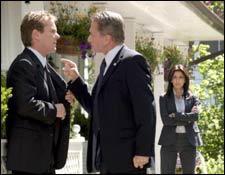 Samrat Sharma / fullhyd.com
EDITOR RATING
6.0
Performances
Script
Music/Soundtrack
Visuals
NA
NA
NA
NA
Suggestions
Can watch again
NA
Good for kids
NA
Good for dates
NA
Wait to rent it
NA
Michael Douglas is 61, and unlike his contemporaries, he still looks cool with a sneer in his face and a gun in his hand. He still gets the ladies, and he looks damn convincing in sharp suits and designer glasses. Copy that.

In The Sentinel, the White House thriller directed by SWAT's Clark Johnson, Douglas plays a dedicated US Secret Service Agent, Pete Garrison, who took a bullet for Reagan once, and is protecting the current President of the United States (a singularly uninspired David Rasche). I would say he is overdoing his job as you soon learn he is also having a torrid affair with the wife of the President, Sarah Ballentine (Kim Basinger).

While the film begins on such an implausible plot point, it delivers a solidly intriguing and thrilling, if pretty straightforward, first act, with action and twists setting the tone. Kiefer Sutherland, after the phenomenal success of 24, gets to wear the secret badge again, and his inclusion lends a certain brevity to the proceedings that really helps set the tone for the film. Sutherland is David Breckinridge, a serious, no-nonsense agent who hates Pete as he thinks he is sleeping with his wife.

Jill Marin (Eva Longoria in an avatar overhaul), a tough, and sassy rookie agent just graduated from the Secret Service Academy, shows up on Pete's recommendation to work with David. All this comes to a head when a plot is uncovered to assassinate the President when an agent is found dead, and evidence damning Pete surfaces. David is convinced Pete is a conspirator, and Pete is now on the run, using the shadow world against itself to solve the mystery and expose the real assassins.

While the film starts with one hell of a first act delivering tense moments of intrigue interspersed with flashy action and some gorgeous visuals, it starts to slowly meander, and works its way very tediously towards the end. Possibly, the fault lies with the movie's choice of source material. It is adapted from a book, and the film struggles to fulfill its entertaining duties while trying to cram in as much of the book it can in the moments in between.

Soon enough, the action and thrill moments are largely relegated to shoot-outs and people pointing guns in various directions. Johnson tries his best to keep the proceedings alive while fleshing out the screenplay to set up the various plot points for the big reveal in the climax, but the full fat work from George Nolfi makes his job that much tougher.

The movie picks up sometime after Pete is on the run, although the additional action bits entertain, but never convince. The film does not reach a plausible destination in all of its ride, and that hampers our believability of the well-crafted world of the Secret Agents.

Douglas and Sutherland carry the movie on their shoulders, really. The chemistry between them as foes is incredibly entertaining, and both actors do a decent job within the confines of an action film. Sutherland carries forward his 24 legacy, and Douglas just shines. I wish they had more scenes together.

A big problem is that the film takes a long time to completely set everything up, and Pete's on-the-run story starts to find its pacing slowly, with the sure-footed Douglas doing a good turn as the man in a corner who fights all odds to get back on top. Again, soon the fun stops, and the film delivers a weak finale, not short on flash-bang action, but short on plausibility.

The director uses all the toys in his bag to entertain us, and that is a big relief, as the tedium is often punctuated by a serviceable action plot line. The film is a straightforward, by-the-books thriller entertainer, and it delivers on these counts handsomely. The problem is just that it remains shacked in its self-image, and never strives for bigger things. It's a shame it relegates itself to a B-thriller status, despite having the leads and the charisma to rise above its ranks.

But this movie at least delivers a sufficiently entertaining, if slightly frugal and dense 100 or so minutes, and these days even that is something rare. Watch it if you want by all means, but do not go expecting exceptional action or a smart mystery.
Share. Save. Connect.
Tweet
THE SENTINEL SNAPSHOT

ADVERTISEMENT
This page was tagged for
The Sentinel english movie
The Sentinel reviews
release date
Michael Douglas, Kiefer Sutherland
theatres list
Follow @fullhyderabad
Follow fullhyd.com on
About Hyderabad
The Hyderabad Community
Improve fullhyd.com
More
Our Other Local Guides
Our other sites
© Copyright 1999-2009 LRR Technologies (Hyderabad), Pvt Ltd. All rights reserved. fullhyd, fullhyderabad, Welcome To The Neighbourhood are trademarks of LRR Technologies (Hyderabad) Pvt Ltd. The textual, graphic, audio and audiovisual material in this site is protected by copyright law. You may not copy, distribute, or use this material except as necessary for your personal, non-commercial use. Any trademarks are the properties of their respective owners. More on Hyderabad, India. Jobs in Hyderabad.