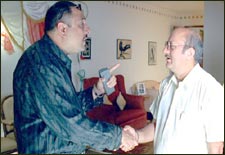 Samrat Sharma / fullhyd.com
EDITOR RATING
7.0
Performances
Script
Music/Soundtrack
Visuals
NA
NA
NA
NA
Suggestions
Can watch again
NA
Good for kids
NA
Good for dates
NA
Wait for OTT
NA
The increased number of screens due to the growing number of multiplexes in metropolises and cities in India in the past 8 years or so, has given birth to a sub-genre of films by itself. These are the low-budget multiplex films that are released to a smaller audience, and are expected to be a decent substitute to their mainstream brethren, along with generating revenue mostly by word-of-mouth or smart marketing.

Last week's Pyaar Ke Side-Effects and this week's Khosla Ka Ghosla exemplify this sub-genre, and more to the point, fill in the gap for smart, well-made comedies to watch. While Pyaar ke... takes its inspiration from the standard Hollywood romantic comedy template, Khosla... takes its from life. First-time director Dibakar Banerjee's and writer Jaideep Sahni's experiences in Delhi inspire this film, and shapes it into a light, slice-of-life comedy, and largely succeed.

The subject matter is no laughing matter, and is in fact quite grave for people who have gone through harrowing experiences. Kamal Kishore Khosla (Anupam Kher) is a retiring service-class man in Delhi, and a controlling and irritable old patriarch, who has recently invested all his savings in a plot in Delhi. He has hopes of building a 2-floor house, with room for his sensible but self-absorbed software engineer son, Chiraunjee Lal (I kid you not), or Cherry (Parvin Dabas), and his wayward but good-hearted son Balwant, or Bunty (Ranvir Shorey).

Cherry is an indifferent soul, concerned only with his impending job in the US, seemingly oblivious of his theater actress friend with a strong independent streak, and her (Tara Sharma) interest in him. When the broker dupes Khosla, and his plot is fraudulently occupied by unscrupulous land-shark Kishan Khurana (Boman Irani), Khosla tries everything to get his land back. Seeing his father in a soup, Cherry inevitably steps up, and with the help of a mysterious visa agent (Vinay Pathak) and an aging theater father figure (Navin Nischol), starts a mad scheme of his own.

What sunders all brevity in the proceeding is the fractured narrative that is deliberately paced so as to give an authentic Delhi life feel, before settling on to the mad caper devised by Cherry and company. Really, the caper is not the film. The film is the characters it presents and the ride that it takes you on, taking you from familiar situation to familiar situation, and never stopping with the guffaws till the last frame of the film. The characters painted are so familiar - the crabby but instantly like-able unclejee, the loudmouth son, the crotch-scratching businessman - that most of the time there is a knowing grin on your face.

This is the film's strongest point, and the director realizes that completely. He relentlessly piles on character moments and locations so eerily familiar, that the situations are rendered comedic just by their mere presence. Not to mention the overall quality of performances.

Kher and Nischol are veterans, and are at the top of their games during every scene they are a part of. Boman Irani has proven himself as a class act once again, and the rest of the cast matches up well. Ranvir Shorey is a revelation, really - he has found his comic nerve, and he makes use of subtle mannerisms to once again come out on top of the funny heap this week.

The rest of the cast are uniformly excellent, with the probable exceptions of Dabas and Sharma. They are adequate in their roles, but do come across as slightly trapped in their cosmopolitan avatars, at least in the first half.

Despite the burgeoning cast of characters, and a plot that slowly turns into a Govinda-style caper, the film, largely thanks to the talented actors and a sure-footed direction, remains grounded in reality, and never comes off as absurd or over the top - merely fanciful. And it is this quality - the film's adamant stand to remain a slice-of-life comedy with real characters and believable situations - that keeps it endearing and fun.

Khosla Ka Ghosla is a short film, with very less time for songs, or even unnecessary moments that slow the narrative, and yet it is entertaining and fun. This is fat-free entertainment at one of its funniest, and grips your attention from the get go to never let go till the end. It is less a film with a lesson, and more a film with an agenda - to make you laugh. And it fulfills it as best it can, which, by the way, is pretty damn good. It may have benefited from a more structured approach, or a slightly trimmed second act, but all in all is a solid first effort. Definitely watch worthy.
Share. Save. Connect.
Tweet
KHOSLA KA GHOSLA SNAPSHOT

ADVERTISEMENT
This page was tagged for
Khosla Ka Ghosla hindi movie
Khosla Ka Ghosla reviews
release date
Anupam Kher, Boman Irani
theatres list
Follow @fullhyderabad
Follow fullhyd.com on
About Hyderabad
The Hyderabad Community
Improve fullhyd.com
More
Our Other Local Guides
Our other sites
© Copyright 1999-2009 LRR Technologies (Hyderabad), Pvt Ltd. All rights reserved. fullhyd, fullhyderabad, Welcome To The Neighbourhood are trademarks of LRR Technologies (Hyderabad) Pvt Ltd. The textual, graphic, audio and audiovisual material in this site is protected by copyright law. You may not copy, distribute, or use this material except as necessary for your personal, non-commercial use. Any trademarks are the properties of their respective owners. More on Hyderabad, India. Jobs in Hyderabad.