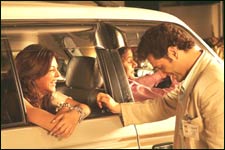 EDITOR RATING
5.0
Performances
Script
Music/Soundtrack
Visuals
NA
NA
NA
NA
Suggestions
Can watch again
NA
Good for kids
NA
Good for dates
NA
Wait to rent it
NA
How much you appreciate Zindaggi Rocks depends on how much you are willing to appreciate it, on what you have been through in your own life. In other words, it will not work at the box-office.

Zindaggi Rocks can be seen as the way that the human mind works - how sometimes a person does things that seem incredible feats/sacrifices to others, but which do not appear anywhere near that difficult to the person himself, since for him this is a way, or at least a chance, to avoid something more catastrophic that he simply cannot deal with. Just having a chance in such situations to avoid what's coming is enough, and the person is willing to do just whatever it entails. The situation gives superhuman mental strength.

So Zindaggi Rocks is about a mother who needs to save her son. There is only one way, it is the supreme sacrifice, but the mother does not even give it a second thought. The thought of leading a lifetime without her son is unbearable for her, and this is a small price to pay.

Themes like this, for the uninitiated, are called "parallel cinema". It's highly unlikely you'll watch the film after reading that previous paragraph - you're content letting it be a good film, and just want to co-exist with it without getting in its way. So Zindaggi Rocks is a touching film that'll have poor audiences, since most Indians go to films to escape from problems, to feel happy - films are more a medium of entertainment in India than a medium of artistic expression, and this one clearly gets filed under the latter.

Kria (Sushmita Sen) is a popular pop-singer who runs into Sooraj Rehan (Shiney Ahuja), a doctor at a corporate hospital, when she develops a gash on her arm. She is charmed by his poise, and he by her vivacity. Sooraj has his own skeletons in the closets of his mind, however, and avoids Kria's overtures, but a true alpha woman, she gets him out for a date and spends a lot of time anyway.

When he still does not respond, she just ruthlessly proposes, and then gets to know why he is so reticent - he's already married, and his wife has been in coma 5 years after an accident. She is however only too touched, and falls even deeper in love, and Sooraj cannot help but happily give in by now.

Things seem rosy for everyone now, when Dhruv (Julian), Kria's 11-year-old adopted son who she's raised for almost a decade and who she completely dotes on, develops a hole in his heart, and the diagnosis is that he will die unless he can get a heart transplant. Kria is completely wrecked, and, upon realizing that there is very bleak chance of finding a donor who'll die naturally within 8 hours of Dhruv's deadline for the operation, decides to perform the ultimate sacrifice.

The film assumes it is about the unconditional love of a mother for her child, but there are other questions to ponder over too. When Kria decides to give herself up for her son, she completely ignores what Sooraj, and her own family (mother, aunt, sister), would go through. It's the same misery for them that she tried to avoid for herself - living without someone who you dearly love. So did Kria kill herself to save her son or to save herself? Isn't it an infinitely tougher feat when in supreme misery to continue to live on for the people who love you, rather than to kill yourself?

Sushmita Sen is certainly a talented actress, but she looks a little too old to play the role of a lively and chirpy young singer. Her character is also sketched too inconsistently - for a highly successful celebrity who's kept herself unattached to men despite some very successful men undoubtedly trying to court her, what did she see in Sooraj? And how does someone so child-like with even her own son survive in the shark-infested world of recording companies and glamor?

The pop-singer part then is obviously to capitalize on the glamour of Sen, and protect this from becoming a complete art film, but they should have taken more care in sketching the character so as to be consistent.

The lack of care also shows in how the same character is called by multiple names in the film, confusing you. Sooraj is called Rehan sometimes, and Dhruv is called Ruvi. Then, the whole track towards the end showing an old Parsi man and cops trying to help him is completely unnecessary. And there aren't enough emotional moments between the mother and child in the first half, to build the strength in that thread.

On the flip side, the film looks professional, and has some good observations on life in the form of reflections by Sooraj. However it certainly is a tear-jerker, and you'll enjoy this only if... okay, it's hard to say.
Share. Save. Connect.
Tweet
ZINDAGGI ROCKS SNAPSHOT

ADVERTISEMENT
This page was tagged for
Zindaggi Rocks hindi movie
Zindaggi Rocks reviews
release date
Sushmita Sen, Shiney Ahuja
theatres list
Follow @fullhyderabad
Follow fullhyd.com on
About Hyderabad
The Hyderabad Community
Improve fullhyd.com
More
Our Other Local Guides
Our other sites
© Copyright 1999-2009 LRR Technologies (Hyderabad), Pvt Ltd. All rights reserved. fullhyd, fullhyderabad, Welcome To The Neighbourhood are trademarks of LRR Technologies (Hyderabad) Pvt Ltd. The textual, graphic, audio and audiovisual material in this site is protected by copyright law. You may not copy, distribute, or use this material except as necessary for your personal, non-commercial use. Any trademarks are the properties of their respective owners. More on Hyderabad, India. Jobs in Hyderabad.