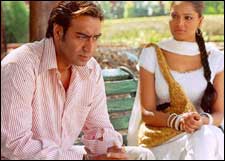 EDITOR RATING
7.0
Performances
Script
Music/Soundtrack
Visuals
NA
NA
NA
NA
Suggestions
Can watch again
NA
Good for kids
NA
Good for dates
NA
Wait for OTT
NA
In the end when Ajay Shastri returns to his father for one last night before it's all over, and cries for forgiveness and for all that might have been, you are reminded of the film's beginning – of a naïve and righteous youngster with dreams of a secure job, with a homely girl doting on him, and with life on his side. That seems so long back and so far away now. And so irreversible.

The first big truth of life that hits you like a bolt one day, and still makes you stay in denial so you can cope with it, is that your life can actually be destroyed by a mistake made in sheer immaturity, and that there's no one up there looking out for you, who'll give you a second chance when you repent since it's your whole life. Yes, Ajay Shastri is well and truly over by the last frame. And it's hard not to feel sad.

And any movie that makes you wistfully long for its beginning again has got it right somewhere.

Apaharan by Prakash Jha would normally be another mob movie in the genre of Satya and Company. What sets it apart, though, is that it takes the complete failure of law and order in Bihar out of the world of newspaper editorials, and puts it in flesh and blood. And if you are willing to think beyond the tale in question, it shows you how hard it is to find a way out for Bihar.

Ajay Shastri (Ajay Devgan) is the son of Professor Raghuvansh Shastri, a man who's dedicated his life to fighting corruption, and is heavily respected for it even by the corrupt themselves. Ajay is following in his dad's ideals himself, but things go wrong when, after topping the merit list for recruitment to the police force, he is told that his name can be included only if he pays Rs. 5 lakhs as bribe.

He decides it's wrong but that he has to do it. And so he borrows it from some Bad Guys. He gets the job, only to lose it when his dad gathers evidence against the home minister Dinakar Pande. He cannot tell his father about the money, of course, and when the goons threaten to kill the old man if he cannot repay in 3 days, he agrees with his friends to do a kidnapping to earn the money.

Unfortunately, the man kidnapped turns out to be someone protected by Gaya Singh, the lord of Salampur and the protégé of Tabrez Alam (Nana Patekar), a powerful mob-lord in the guise of a Muslim politician. Gaya gets Ajay arrested through the corrupt cops, sent to the same jail from where he rules his fiefdom, and humiliates him in an inhuman way.

Something changes in the trepid Ajay, and he makes a deal with the currupt DSP Shukla, who's coincidentally just been rubbed the wrong way by Gaya Singh. Ajay is let out, and the film now steps on the thriller pedal with zest. Ajay snuffs out Gaya in sequences that make you whistle your lungs out, and then joins forces with Tabrez, who makes him the mafia lord of UP and Bihar in a few dizzying years of kidnapping and extortion.

That's a path of no return, though, and the film gives the perfunctory message that crime doesn't pay.

More compelling than the tale itself, however, is the depiction in Apaharan of the way the law works in Bihar. Ajay gets jailed when it suits him, is worshipped by the cops there – he's the most wanted kidnapper of North India with no redeeming features – with the place is done up for him like a luxury apartment with even a private gym, and he moves in and out like it were a hotel. The police is fangless, the administration is incredibly corrupt, and only the brutally powerful can get elected.

The performances are all endowed, though using Nana Patekar for that role is overkill. Bipasha's screentime lasts 10 minutes altogether. The film has several moments and dialogues that have the audiences lustily cheering. The relation between dad and son is pretty unconvincingly done, though.

ADVERTISEMENT
This page was tagged for
Apaharan hindi movie
Apaharan reviews
release date
Ajay Devgan, Nana Patekar
theatres list
Follow @fullhyderabad
Follow fullhyd.com on
About Hyderabad
The Hyderabad Community
Improve fullhyd.com
More
Our Other Local Guides
Our other sites
© Copyright 1999-2009 LRR Technologies (Hyderabad), Pvt Ltd. All rights reserved. fullhyd, fullhyderabad, Welcome To The Neighbourhood are trademarks of LRR Technologies (Hyderabad) Pvt Ltd. The textual, graphic, audio and audiovisual material in this site is protected by copyright law. You may not copy, distribute, or use this material except as necessary for your personal, non-commercial use. Any trademarks are the properties of their respective owners. More on Hyderabad, India. Jobs in Hyderabad.