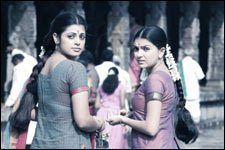 Harika Vankadara / fullhyd.com
EDITOR RATING
3.0
Performances
Script
Music/Soundtrack
Visuals
7.0
5.0
5.0
6.0
Suggestions
Can watch again
No
Good for kids
No
Good for dates
Yes
Wait to rent it
Yes
A taut leg-grabber from Kollywood, Vaishali is a film for those who fancy the supernatural genre and psychological thrillers. While it borrows liberally from Hollywood, its gripping execution redeems it to a good extent. That, however, might not be entirely enough to make it worth a watch for Telugu audiences, who have to live with the lip-sync (the movie a dubbed version of the Tamil Eeram) and the unrecognizable cast.

One of the many flaws of humanity is its greater receptiveness, consciously and sub-consciously, to evil than to good. All it takes is a shadow of doubt to convince us that someone might be wrong, but a positive report on a person is met with skepticism.

Bala (Nanda) is a psychopath who epitomizes this, and a mere observation made by his business partner regarding the trends of infidelity make him a suspicious spouse. And Vaishali (Sindhu Menon) is his wife and victim. The corpse of a non-wrinkled Vaishali floating in her bathtub marks the beginning of the film.

ACP and Vaishali's former lover Vasudev (Aadi) volunteers to take up this case for obvious reasons, and is baffled by the suspicious death of 2 more residents (the picturisation of both will have the average movie buff shout "Final Destination") in the same apartment complex.

Vasu notices that there is a common element in all the 3 deaths that have occurred thus far - water. Closely following this discovery is the observation that the sight of water dripping in some form greeted him before the latter 2 deaths, Grudge-style.

The script writer of Vaishali, after exhausting ideas from his stack of foreign horror movies, now decides to make the supernatural his cornerstone. By the time the fourth crime scene is brought in, he realizes that he has overdone Final Destination, and introduces Vaishali's spirit into the proceedings. And before you can say "ghost", your mind discerns the skeletal structure of the story.

Vaishali has its plus points. Director Arivazhagan seamlessly transports you from the present to the past and back. The actors all do a fine job, and Saranya makes most of her limited screen space. And the few songs that have been worked into the film can linger.

However, the director and the writer of Vaishali do a pendulum act in the movie. Either they do an exemplary job taking care of the nuances, or they leave holes the size of Godzilla. The spirit taking control of a human, and the characterization of Vaishali as a pragmatic girl-next-door, are done with impressive subtlety. But the love story (of Vasu and Vaishali) can be predicted by a school kid, and the writer seems prone to contradicting himself.

It's the denouement, however, that is the most unsatisfactory - the final explanation given is grossly unconvincing, and does not seem worth the journey Vaishali's spirit embarked upon. And a dash of humor would have done the movie a world of good - the parallel sequences being sporadically narrated have much scope for humor.

Vaishali is aimed at multiplex audiences, and will appeal mostly to movie connoisseurs and to those associated with film schools - it's far too serious for people going out for some easy entertainment.
Share. Save. Connect.
Tweet
VAISHALI SNAPSHOT

ADVERTISEMENT
This page was tagged for
vaishali movie download
vaishali telugu movie download
Vaishali telugu movie
Vaishali reviews
release date
Follow @fullhyderabad
Follow fullhyd.com on
About Hyderabad
The Hyderabad Community
Improve fullhyd.com
More
Our Other Local Guides
Our other sites
© Copyright 1999-2009 LRR Technologies (Hyderabad), Pvt Ltd. All rights reserved. fullhyd, fullhyderabad, Welcome To The Neighbourhood are trademarks of LRR Technologies (Hyderabad) Pvt Ltd. The textual, graphic, audio and audiovisual material in this site is protected by copyright law. You may not copy, distribute, or use this material except as necessary for your personal, non-commercial use. Any trademarks are the properties of their respective owners. More on Hyderabad, India. Jobs in Hyderabad.