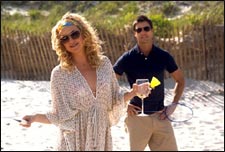 Nupur Barua / fullhyd.com
EDITOR RATING
4.0
Performances
Script
Music/Soundtrack
Visuals
5.0
4.0
4.0
4.0
Suggestions
Can watch again
No
Good for kids
No
Good for dates
Yes
Wait to rent it
No
When Emily Giffin's book, Something Borrowed, became an international bestseller, the next obvious thing to do was to translate the written word into moving pictures. And who better to produce it than Hilary Swank, the 'serious' actor, who has been trying to make her mark in the chick flick genre?

The story revolves around Rachel White (Ginnifer Goodwin), who has just turned 30. Her best friend since childhood, Darcy Rhone (Kate Hudson), is about to be married to Rachel's former classmate from law school, Dex Thaler (Colin Egglesfield). Also in the picture is Ethan (John Krasinski), another close friend from the time when they were kids.

Rachel has always had a 'thing' for Dex, but she does not realize that the feeling is mutual, until her 30th birthday party. When Ethan confronts her, she admits that she is waiting for Dex to do something about it. The only reason that Dex has inhibitions about creating a scandal is because his mother is a patient of depression, and the forthcoming wedding is the only reason she smiles these days.

As a book, the story is the stuff that chick lit classics are made of - true love, obstacles, martyrdom, uncertainty, friendship, and so on. As a movie, however, these elements become tedious. The screenplay largely stays true to the book, but maybe a chick lit hit does not automatically make a great chick flick.

The first flaw that strikes you is that both the women are playing 30-year-olds, though Hudson definitely looks much older than Goodwin. The second flaw is the premise that all good girls-next-door will have a bitchy best friend. And the third flaw is that cheating on your fiancÃ©e and friend is acceptable, just because she is outspoken and controlling.

The characters in the movie are insipid and shallow, despite the obvious efforts that the two leading ladies have put in. Even with the 21st century firmly in place, regressive plots have become the norm of the day, even in the western world. Suffering is a virtue, and cowardly men are heroes. Colin Egglesfield is so busy emulating Tom Cruise (and Goodwin looks surprisingly like Katie Holmes) that he does not seem to notice just how wishy-washy he appears.

In comparison, John Krasinski is a relief. One looks forward to his smart one-liners and nonchalant attitude. The character that stands out as a well-developed one is that of Marcus (Steve Howey). He is a narcissistic flirt who loves to skateboard. Ashley Williams makes an impact as Claire, but is too stereotypical to be a topic of discussion.

Unlike most stories set in New York, the city does not much of a role in Something Borrowed. The characters keep flitting off to the Hamptons, and even that does not do much for the visuals and the production design. Speaking of which - some of the photographs from childhood days are so obviously photoshopped that you wonder why they insist on showing them over and over again.

ADVERTISEMENT
This page was tagged for
Something Borrowed english movie
Something Borrowed reviews
release date
Kate Hudson, Ginnifer Goodwin
theatres list
Follow @fullhyderabad
Follow fullhyd.com on
About Hyderabad
The Hyderabad Community
Improve fullhyd.com
More
Our Other Local Guides
Our other sites
© Copyright 1999-2009 LRR Technologies (Hyderabad), Pvt Ltd. All rights reserved. fullhyd, fullhyderabad, Welcome To The Neighbourhood are trademarks of LRR Technologies (Hyderabad) Pvt Ltd. The textual, graphic, audio and audiovisual material in this site is protected by copyright law. You may not copy, distribute, or use this material except as necessary for your personal, non-commercial use. Any trademarks are the properties of their respective owners. More on Hyderabad, India. Jobs in Hyderabad.