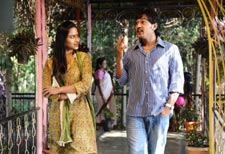 Harika Vankadara / fullhyd.com
EDITOR RATING
3.0
Performances
Script
Music/Soundtrack
Visuals
5.0
3.0
5.0
4.0
Suggestions
Can watch again
No
Good for kids
No
Good for dates
No
Wait for OTT
No
A story that is nothing more than a patchwork of fragments of various movies churned out over the last decade has no hopes of resurrection. And prospects are further bleak if both the hero and the director are debutants. The producer, too, seemed to have realized this early on, and launched a pre-release ad campaign aimed at ensuring that "House Full" boards are put up at theatres before audiences wake up to what they stand to lose after watching the movie - both their money and their sanity.

The music that accompanies the opening credits of Bablu prepares the audience for a power-packed film. But 5 minutes later, you realize that the movie is far from one.

The plot goes like this. Both Bablu (Manotej) and Pooja (Aditi Sharma) are characters who conform to the set silhouettes for a hero and a heroine. Bablu is a sprightful youngster making the most of his life with the capability to single-handedly send dozens of people flying into trees whenever the script requires him to. Pooja is a beautiful woman, with a penchant for social service, and who has the antagonist pining for her.

Her father is killed for suggesting that he might not let the villain marry Pooja after all, and the damsel in distress is on the run for the rest of the movie.

Meanwhile, Bablu is a part of a family package comprising 3 unchristened older brothers - played by Vinod Kumar, Rao Ramesh and Sivaji Raja - all of whom have given up marriage. These men are nursing a hatred towards women for a reason that has been presented to the Tollywood audience in various packages 57,55,845 times - that is, because they think that they are evil.

Yes, you have guessed the rest of the story.

Fortunately for all involved, the writer has opted to leave sleep-inducing-dialogues out of the climax. Instead, he chooses the quickest (though not always easy) solution there is to solving any problem - have his characters blurt out the truth.

If the climax had been emotionally-winding, Aditi would have been able to pull it off, but Manotej would have had the scene crashing - his lip-sync has your nerves twanging, and makes you wonder if the actor even glanced at the script before placing himself in front of the camera. In what is a negative for both the director and the actor, Manotej's personality does not allow him much of a screen presence, and he miserably fails to exude the aura of a formidable opponent to the villain.

The rest of the cast includes Brahmanandam, Raghu Babu, Venu Madhav, Ali, Krishna Bhagawan, M S Narayana and Geetha Singh. Any movie with such names in its cast ought to entertain regardless of its plot, right? Wrong. Brahmanandam is wasted in this flick, and fails to elicit any laughs. His name (Narnia From California) and his wacky clothes, however, do draw a few snorts. The potential of M S Narayana and Kondavalasa is also not tapped into. Ali and Venu are given their walking papers too soon. It is indeed a pity that a cast brimming with talent was binned with such ease.

Chakri has incorporated tracks with situationally-apt lyrics, but the visuals of the songs are avoidable.

Want to be rid of that awfully clingy girlfriend? Drag her to this movie and pretend you love it.
Share. Save. Connect.
Tweet
BABLU SNAPSHOT

ADVERTISEMENT
This page was tagged for
bablu telugu movie
bablu movie
Bablu telugu movie
Bablu reviews
release date
Follow @fullhyderabad
Follow fullhyd.com on
About Hyderabad
The Hyderabad Community
Improve fullhyd.com
More
Our Other Local Guides
Our other sites
© Copyright 1999-2009 LRR Technologies (Hyderabad), Pvt Ltd. All rights reserved. fullhyd, fullhyderabad, Welcome To The Neighbourhood are trademarks of LRR Technologies (Hyderabad) Pvt Ltd. The textual, graphic, audio and audiovisual material in this site is protected by copyright law. You may not copy, distribute, or use this material except as necessary for your personal, non-commercial use. Any trademarks are the properties of their respective owners. More on Hyderabad, India. Jobs in Hyderabad.