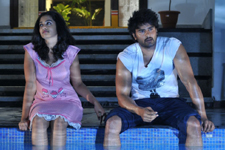 If there's anything Ram Gopal Varma has taught us, it is that people who visit deserted farmhouses in the middle of nowhere, are asking for it. But Maruthi, who wrote Prema Katha Chitram, manages to give us a tight enough premise to forget that lesson.

Spook fest Prema Katha Chitram is a fun, young, clever movie that typifies Tollywood's rise of fresh, new blood. If not for star brother-in-law Sudheer Babu, this might even have been a celebration of the anti-bloodline in Tollywod.

And as is the case with surprise packages like this one, PKC also brings out of relative obscurity a face or two that deserve a shot at the limelight. One of them is comedian Praveen, earlier seen in movies, doing just one thing, i. e., play an insignificant sidekick to someone just as insignificant. Praveen, here, is one among the foursome comprising Nandu (Nandita), Sudheer (Sudheer Babu), Praveen (Praveen) and Giri (Giri), who set out on a suicide mission.

These people want to end their lives not because they were promised virgins or something, but because each of them has had troubles. The guest house looks perfect, but it turns out that not everyone is in this for the suicide.

Also, there's someone else at home.

A few hiccups aside, Prema Katha Chitram is a horror-comedy that achieves what it sets out to do - keep people rolling in the aisles, and spook you once in a while. The film builds up momentum nicely, with scenes that lead you to consider this a ball of fluff, all the while keeping you entertained, and then goes into its element.

The concept-based humour works, thanks to the sharp dialogues. Several moments in the film are brilliant, and they prove you don't have to be over-the-top to keep audiences hooked. Characters are kept real and believable, and their responses to the supernatural are just as real and relatable. The horror scenes are devoid of slasher violence, but yes, the ghost has a tendency to scream.

However, there are a few things that don't fit in. For instance, where does the whole discussion about suicide go? And what was with that MLA-slapping scene (much as we loved it)?

The film could also have been a suitably mushy romantic story, if the makers wanted it to be. Pretty much every emotion seems deftly handled here, and this is what helps you connect to the characters.

Despite the low budget, the movie is nice to the senses. The impressive music and tasteful cinematography aid the cause of the movie. It's hard to see a Telugu movie nowadays that is more worthy of its packaging than PKC is, and the team should be proud.

Nandita, who seems like she has a smart head on her shoulders, apart from the strikingly interesting face, is quite the pivot of the film. She does justice to her role, except in a few places where she appears more misguided than talentless. (Also, we noticed that the cameraman seems to have had a s-l-i-g-h-t voyeuristic tendency to focus on some of her "womanly" attributes.) On the whole, the girl is certainly a personality to watch out for.

Sudheer Babu is very effective as the character he plays. Mild-mannered but pleasant-looking youngsters like him, who'd look out of place in a mass-hero-entertainer-orgy, should actually choose films like these - they let them be remembered for all the right things.

Praveen and Giri are the soul of this film, and some of their moments are actually awesome. A couple of other small-time characters seem a amateur, though.

You must definitely watch Prema Katha Chitram, but make sure you're prepared for the chills. Kids and grandparents must avoid it, though.
Share. Save. Connect.
Tweet
PREMA KATHA CHITHRAM SNAPSHOT 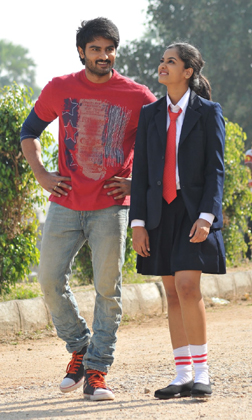 ADVERTISEMENT
This page was tagged for
prema katha chitram movie ki anita
prema katha chitram movie theatre list at Hyd
Prema Katha Chithram telugu movie
Prema Katha Chithram reviews
release date
Follow @fullhyderabad
Follow fullhyd.com on
About Hyderabad
The Hyderabad Community
Improve fullhyd.com
More
Our Other Local Guides
Our other sites
© Copyright 1999-2009 LRR Technologies (Hyderabad), Pvt Ltd. All rights reserved. fullhyd, fullhyderabad, Welcome To The Neighbourhood are trademarks of LRR Technologies (Hyderabad) Pvt Ltd. The textual, graphic, audio and audiovisual material in this site is protected by copyright law. You may not copy, distribute, or use this material except as necessary for your personal, non-commercial use. Any trademarks are the properties of their respective owners. More on Hyderabad, India. Jobs in Hyderabad.