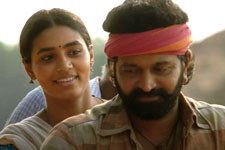 Sai Tulasi Neppali / fullhyd.com
EDITOR RATING
9.0
Performances
Script
Music/Soundtrack
Visuals
9.0
7.5
9.0
9.0
Suggestions
Can watch again
Yes
Good for kids
No
Good for dates
Yes
Wait for OTT
Yes
In many ways, Kantara tells an age-old story of conflict: of natives fighting to protect their way of life against the destructive march of progress. Set in a fictional village in Karnataka, Kantara's story revolves around a large tract of forest land inhabited by tribal people, and overseen by a forest officer. But told through the lens of folklore and mysticism, Kantara (which means mystical forest in Kannada) transforms this familiar outline into a spellbinding experience.

The story begins in 1847, with the ruler of the hinterlands of Karnataka granting a tribe hundreds of acres of forest in exchange for their stone deity. Presiding over this pact is the tribe's "Daiva" - a chosen one who is briefly possessed by oracular spirits. The Daiva decrees that as long as the king and his descendants stand by their promise, they can live in peace and prosperity. The punishment for reneging - as one of the king's greedy descendants finds out when he demands the land back - is death.

Then in 1990, the peace is once again broken by the arrival of a government forest officer Muralidhar (Kishore Kumar). He determines that the tribes have encroached on the reserved forest area, and have been axing trees and hunting game without permission, and he threatens to evict them. But the tribals, and in particular the burly Sivanna (Rishab Shetty), fight back. Supporting the tribe's efforts is the current-day descendant of the king, a generous but cunning landlord, Devendra (Achyuth Kumar). The native Sivanna, the "outsider" officer, and the "insider" landlord: the clashes that arise between these characters form the story of Kantara.

Kantara's backbone is the Bhuta Kola - an annual tribal festival during which an appointed Daiva dresses up in elaborate costumes and makeup, and performs a mesmerizing dance ritual to invoke spirits. In that possessed form, the Daiva resolves disputes, predicts the future, and blesses the community. As a young boy, Sivanna is traumatized when his father, then the village Daiva, vanishes into thin air during the Bhuta Kola ceremony. So rather than continue his father's legacy Sivanna turns to a life of pleasure - drinking, getting high, hunting pigs, racing buffaloes (at a tribal event called Kambala), and chasing after his crush Leela (Sapthami Gowda). But Sivanna is still consumed by visions of his father, of a yellow-painted face popping out of corners, and of a wild boar lurking in the shadows. These visions, those tribal ceremonies, and that enrapturing quality of Bhoota Kola where the Daiva goes into full-body shivers and lets out a blood-curdling scream, make us a rapt audience.

Despite such heavy use of supernatural references, Kantara is remarkably devoid of artificiality or contrivances. The usual fights and seductions that make for a good drama are still there, but they never leave the context of the story. For instance, we've seen films locate fight scenes inside mud pits purely for the optics, but here the mud pit where Sivanna fights is also the location of the buffalo-racing event. We see Sivanna and Leela's romantic escapades, but rather than going off to exotic locales, they sneak into the landlord's brick factory, where the curing fires provide a perfect visual metaphor for their lust. In a confrontation with the forest officer, Sivanna's menacing face is ominously lit by the headlights of the officer's Jeep. Several such moments of nuanced storytelling and breathtaking cinematography create an all-consuming experience for the viewer.

Kantara's story, especially in the first half, is so subversive to the usual tropes of good versus evil that it tests the loyalties of the viewer. The forest officer, Muralidhar, the typical "oppressor" character, is instead an incorruptible man who wants to stop illegal logging and hunting by the tribals. Whereas Sivanna and his buddies, the "hero, and friends", are alcoholics, gamblers and mischief-makers. Muralidhar asks the villagers to stop bursting firecrackers for the safety of the forest animals, and he scolds a man for cutting a tree. To a modern climate-conscious person, Muralidhar is a sympathetic character. But then so are the tribals who face displacement by the Indian government. Without the black-and-white morality of the typical social film, it is hard to figure out who to root for, and this makes for some intrigue. In the end, however - and much to my disappointment?- this gray area is done away with, and a neat resolution is presented.

As a consolation, the film's final scenes are so hair-raising, so intense and so volcanic that I was seized with emotion. Ajaneesh Loknath's background score, imbued with folk sounds, is original, divine and deeply resonating. It is in moments like these that promise of Cinema as a transcendental experience seems to be fully realized. Every character pulls their weight to give us this landmark movie, but Rishab Shetty, who not only played Sivanna but also wrote and directed the film, is a truly superlative talent. He plays Sivanna with such raw strength, whether it is grabbing Leela by the hair and biting into her neck lustfully, or pouncing on thugs like a hungry, wild animal.

Kantara is an epic feat of visual storytelling. A tour de force that is sure to inspire a resurgence in folklore films. Originally made in Kannada, it was such a hit that, by popular choice, it was dubbed into Telugu, Malayalam, Hindi and Tamil - a stark contrast to the duds like Brahmastra and Liger which needed to be released pan-India to justify their lofty budgets. So I hope Kantara serves to remind filmmakers that audiences are clever, that they do care about authenticity, and that there are no shortcuts to making good cinema. 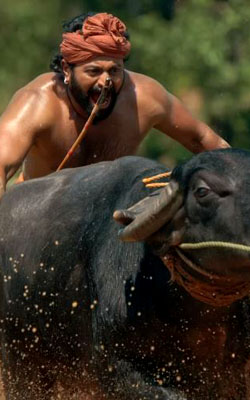 Where is the grey area in this film!!!!

The police officer simply egoistic and want his word to win at any cost even with the warning from higher officials and magically turns to tribal side the moment he understood the true nature of the landlord.

The landlord know he want the land, and act good with villagers. Until end he does nothing to capture land or how to remove the curse by ancestors.

The last fight is only saved by the excellent background score and raw ness.

ADVERTISEMENT
This page was tagged for
Kantara (Telugu) telugu movie
Kantara (Telugu) reviews
release date
Rishab Shetty, Kishore
theatres list
Follow @fullhyderabad
Follow fullhyd.com on
About Hyderabad
The Hyderabad Community
Improve fullhyd.com
More
Our Other Local Guides
Our other sites
© Copyright 1999-2009 LRR Technologies (Hyderabad), Pvt Ltd. All rights reserved. fullhyd, fullhyderabad, Welcome To The Neighbourhood are trademarks of LRR Technologies (Hyderabad) Pvt Ltd. The textual, graphic, audio and audiovisual material in this site is protected by copyright law. You may not copy, distribute, or use this material except as necessary for your personal, non-commercial use. Any trademarks are the properties of their respective owners. More on Hyderabad, India. Jobs in Hyderabad.