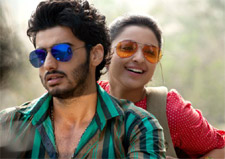 Samrat Sharma / fullhyd.com
EDITOR RATING
6.5
Performances
Script
Music/Soundtrack
Visuals
8.0
4.5
9.0
7.0
Suggestions
Can watch again
No
Good for kids
No
Good for dates
Yes
Wait for OTT
Yes
I root for Habib Faisal. His Do Dooni Chaar was full of character, and was an excellent study of a middle class family, and part of the success of Band Baaja Baraat were the dialogues dripping with flavour that Faisal wrote. To top it all, he brought Neetu Singh back in one of her most enjoyable roles ever, and for that, I give him major props.

Ishaqzaade doesn't stop me from rooting for the dude who gets local flavour, but it gives me pause. It gives my unabashed recommendation a falter, and I sigh when I think of the film as a whole. Faisal takes a crackerjack first half, an utterly eloquent cinematic language demonstrated via small-town politics and actors who are not the leading man/woman by any stretch, and then hiccups and stutters his way to the predictable and rote finale.

Set in the land of no remorse, a small town called Almore in Uttar Pradesh, the film begins setting up a Shakespearian feud between 2 families that want to own the town. The Chauhans and the Qureshis hate each other, vie for the same assembly seat, and teach their children to be cogs in the well-oiled machinery of politics and hatred, powered by guns.

Enter Parma, the grandson supreme of the Chauhan family - an unapologetic git who harbours intentions of rising to the top of the Chauhan tree by proving himself. A prince being groomed via a steady supply of guns, flunkeys and the promise of no consequences, he is as far away from a leading man as it gets. Anyone with even a brush with small-town politics has known of a Parma, and he is as charismatic and black of heart as you imagine him to be.

When he meets Zoya - a Qureshi girl who has more spunk than all her brothers - sparks fly. They claw at each other, threaten each other with guns, fists and stern looks. The firebrand Zoya is more than a match with her acid tongue, without having to break out her prowess in being physical.

They inevitably fall for each other, and the obvious sexual chemistry finds outlet as they get married. This is probably the highlight of the film - two completely abrasive and entitled individuals, who hate each other so much and see so much of themselves in the other that they are inevitably attracted to each other. As the romance, steeped well in local flavour and some authentic dialogue, hurtles full speed forward, the film is a breathless, amoral joy, as much a fantasy outlet as any old Yash Raj film shot in Europe.

It's when the film chooses to cut the wings off of its best asset - Parineeta Chopra's angry and independent Zoya - is when it falters heavily, never to recover. The girl is suddenly and unceremoniously made a sobbing whelp, abused and hit throughout, without a spark of life from her. While Parma goes ever deeper into dark emotional terrain, the film gives nothing to the best thing it had - Zoya - and ultimately struggles to find a tone.

By the time the end arrives, in a suitable Shakespearian tone and inevitability, you realize that Chopra's best effort has been completely destroyed by the film's insistence in neutering her, and, in effect, spaying Arjun Kapoor, clearly the second best by a long shot. It's still fascinating, and if you have any patience with the stale second half, the first half or so is going to enthrall you.
Share. Save. Connect.
Tweet
ISHAQZAADE SNAPSHOT 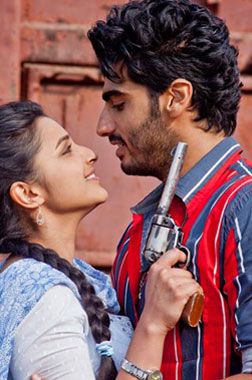 ADVERTISEMENT
This page was tagged for
ishaqzaade movie
Ishaqzaade hindi movie
Ishaqzaade reviews
release date
Arjun Kapoor, Parineeti Chopra
Follow @fullhyderabad
Follow fullhyd.com on
About Hyderabad
The Hyderabad Community
Improve fullhyd.com
More
Our Other Local Guides
Our other sites
© Copyright 1999-2009 LRR Technologies (Hyderabad), Pvt Ltd. All rights reserved. fullhyd, fullhyderabad, Welcome To The Neighbourhood are trademarks of LRR Technologies (Hyderabad) Pvt Ltd. The textual, graphic, audio and audiovisual material in this site is protected by copyright law. You may not copy, distribute, or use this material except as necessary for your personal, non-commercial use. Any trademarks are the properties of their respective owners. More on Hyderabad, India. Jobs in Hyderabad.