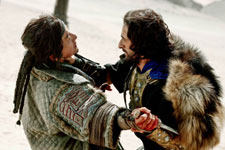 Zehra Abbas / fullhyd.com
EDITOR RATING
6.5
Performances
Script
Music/Soundtrack
Visuals
6.0
6.0
7.0
8.0
Suggestions
Can watch again
No
Good for kids
No
Good for dates
No
Wait for OTT
Yes
Dragon Blade could have been a mean, sinewy, medium-rare steak of a film - it's got Huns, Romans, epic battles and martial arts. But for some inexplicable reason, the filmmakers decided to dunk it in Edam, Gouda, Feta and any other kind of cheese they could get their hands on. The result is a valiant cinematic attempt weighed down by its, well, cheesiness.

Jackie Chan plays the protagonist Huo An, the commander of the Silk Road Protection Squad, entrusted with maintaining peace between the warring ethnicities that populate the region. Our hero and his loyal men are framed with bogus smuggling charges and exiled to the crumbling city called Wild Geese Gate.

Before you can count up to three geese, a Roman general Lucius (John Cusack) and his army march up to Wild Geese Gate, itching for a fight. Turns out that what they're really seeking is refuge and that Lucius is an exile, too, on the run with Publius (Joey Jozef), heir to the Roman empire, whose evil brother Tiberius (Adrien Brody) wants to kill him and claim absolute power for himself.

Good guy exile number one meets good guy exile number two and an unlikely bromance brews, but not before it's preceded by a ferocious sword fight; very Pride And Prejudice. The Chinese and the Romans unite to help each other and ultimately stand together in a climactic struggle against Tiberius.

The Jackie Chan brand that we all know and love - acrobatic stunts laced with humour and unassuming niceness - is on display briefly only in the beginning, and that too in incongruous patches considering the general tone of the film. So, Chan fans be warned that this isn't a typical Jackie Chan movie but rather an attempt by the superstar to widen his repertoire. Judging by his last few films, Chan is attempting to reinvent himself in a more serious, dramatic mold. This career move cannot yield much success since serious, dramatic roles require a certain proficiency of dialogue delivery which Chan lacks, and also because it requires an abandonment of his USP - his unique brand of action comedy. Give us Corny Chan any day.

John Cusack does his best as the stoic Roman general Lucius and does succeed in adding some badly needed gravitas to the proceedings. However, it's Adrien Brody, as a historically inaccurate Tiberius, who steals the show in his turn as the swaggering, deliciously malevolent villain. He provides a welcome counterbalance to the almost saccharine bonhomie between Huo An and Lucius. You'll wish that he had been given more screen time to further flesh out the dark, tortured edge to his character that he conveys in the limited space available to him. Sadly, Tiberius is the most interesting and layered character in a vast array of superficially etched roles.

Joey Jozef as Publius is required to look angelic and helpless to magnify the horror of Tiberius's plan and the nobility of Lucius's loyal service. The little fella delivers satisfactorily. The female characters Cold Moon (Lin Peng) and Xiuqing (Mika Wang) have the briefest of brief roles, and no one would have noticed if their parts were cut and left on the editing room floor.

The production values deserve praise for their scale and aspiration, and it's clear that Jackie Chan, who has also co-produced this film with a budget of 66 million dollars, wanted to give the big Hollywood studio look to his ambitious Chinese film. The ambition of the production team is suitably complemented by the majestic sweep of the cinematography, which is strong enough on its own and doesn't require the underwhelming 3D effects.

The music by Henry Lai is all rousing violins, thundering drums and even Chinese folk tunes. The cumulative effect gives the distinct impression that the filmmakers' favourite word was "epic".

The biggest letdowns of Dragon Blade are plot and dialogue. Writer-director Daniel Lee had a lot of ideas for the film, and made the error of not editing his vision properly - there are too many superfluous plot threads and characters. The most noticeable impact of this lapse is on the characters, which remain one-dimensional, and the pace, which is like a bicycle going downhill once its brakes have failed.

The dialogue suffers from not just poor writing, which leans heavily on platitudes, but also from thick, Chinese accents. There are too many moments in the movie when it's difficult to understand the dialogues of the Chinese actors. The English translation of the lines is cringe-worthy thanks to its simplistic reduction of meaning, and, sometimes, hilariously anachronistic. Picture a Chinese lord in 48 BC berating Chan and his men by calling them "a bunch of losers". Even Chan's heroic monologue at the end of the film is marred by poor dialogue delivery.

The action choreography of the movie has been handled by Jackie Chan and his team, and veers away from his one-man acrobatic style to gory sword fights and hand-to-hand combat more befitting a war epic. The team has tried to reward audience expectations with bang-for-the-buck sword fights between Chan and Cusack and, later, between Chan and Brody. It has also thrown in some feel-good sequences of the Chinese and Romans showing off their military skills to each other and then engaging in friendly one-on-one fights. It's all fun stuff, but you would be hard pressed to identify one action sequence that stands out and stays with you. The final war scene when multiple armies converge on the Gobi Desert is a visual treat.

Though the film references the Han Dynasty and the Roman Empire, historical accuracy is obviously not on the agenda. However, the themes of the movie are relevant to contemporary audiences - friendship, brotherhood and, above all, striving for peace in the face of war. In an obvious dig at the Bush era, Tiberius plans to invade China under the pretext of capturing Lucius. The treatment of these ideas would have been more effective if the drama and jingoism had been pared down more.

Another factor that will play a significant role in Dragon Blade's reception is the Anglo-Chin angle, so to speak. The film is essentially a drama, but the Oriental and Occidental treatments of the genre are vastly different, with the East reveling in high emotion and the West preferring subtle restraint. Perhaps that explains the movie's phenomenal success in China and its lukewarm reception by Western audiences.

Ultimately, Dragon Blade lacks the self-assuredness of the Hollywood epics it so blatantly seeks to emulate, but it is a brave film and you need to appreciate the chutzpah that propels it.
Share. Save. Connect.
Tweet
DRAGON BLADE (3D) SNAPSHOT 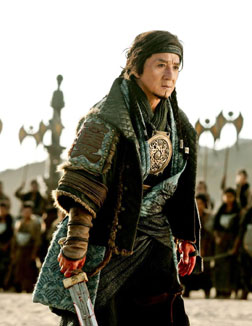 ADVERTISEMENT
This page was tagged for
Dragon Blade (3D) english movie
Dragon Blade (3D) reviews
release date
Jackie Chan, John Cusack
theatres list
Follow @fullhyderabad
Follow fullhyd.com on
About Hyderabad
The Hyderabad Community
Improve fullhyd.com
More
Our Other Local Guides
Our other sites
© Copyright 1999-2009 LRR Technologies (Hyderabad), Pvt Ltd. All rights reserved. fullhyd, fullhyderabad, Welcome To The Neighbourhood are trademarks of LRR Technologies (Hyderabad) Pvt Ltd. The textual, graphic, audio and audiovisual material in this site is protected by copyright law. You may not copy, distribute, or use this material except as necessary for your personal, non-commercial use. Any trademarks are the properties of their respective owners. More on Hyderabad, India. Jobs in Hyderabad.