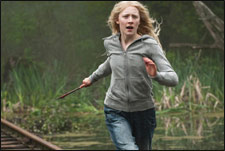 Nupur Barua / fullhyd.com
EDITOR RATING
7.0
Performances
Script
Music/Soundtrack
Visuals
7.0
7.0
7.0
7.0
Suggestions
Can watch again
Yes
Good for kids
No
Good for dates
Yes
Wait to rent it
No
Joe Wright and The Chemical Brothers - one a soulful director (Pride And Prejudice, Atonement) and the other pioneers of British electronic music - put them together, and you would expect an eclectic mix of poignancy and loud bass. This is exactly what Hanna offers.

The movie begins with an unconventional teenager tracking, killing and disembowelling a deer, with no apparent display of emotion or repulsion. Turns out that this 16-year-old, Hanna (Saoirse Ronan), lives in the Finnish wilderness and has never been exposed to the outside world (read - technology). The log cabin that she shares with her father has no electricity, and her education comes from encyclopaedias and fairy tales (Grimm) that her father reads out to her religiously. And, oh, she is also multi-lingual.

So what is Erik Heller (Eric Bana) doing with his teenage daughter in the middle of nowhere? Training her, apparently, to become an assassin, with just that one target in mind. The motive? To avenge her mother's death.

When she is ready, Hanna embarks on an unbelievable journey that takes her across 3 countries. She fights, kills, jumps, and even manages to win a few hearts along the way.

Angelina Jolie and the likes have some serious competition from Saoirse Ronan. After portraying the innocent victim in The Lovely Bones, and the lost girl in The Way Back, Saoirse brings just the right amount of cold-heartedness and vulnerability to her character. There are traces of the young Briony Tallis from Atonement, when it comes to the implausible heartlessness that an adolescent girl can possess. Saoirse is confident and natural, and she carries the movie on her young shoulders.

Eric Bana as the enigmatic father does not have too many dialogues. In fact, his character is rather flat. True, he trains his daughter to become a killer, and true, he is a man to be reckoned with, but somehow he is not convincing. His history is somewhat dubious, and the lack of clarity on his thoughts and actions is unintentional (one presumes), but it makes you indifferent to him.

And then there is Cate Blanchett as the bitchy, witchy, stone-hearted government official, employed by an unnamed national/world security organisation, Marissa Wiegler. With a penchant for heels, Marissa is hot on the trail of Erik and Hanna, and pretty soon, it becomes obvious that she played an important role in the history of both father and daughter.

Cate Blanchett delivers, albeit with traces of her character, Colonel Doctor Irina Spalko, in Indiana Jones And The Kingdom Of The Crystal Skull. She manages to look menacing and dangerous.

The cinematography, with its blue tones, deserves a special mention. Shot in Finland, Morocco and Germany, no 2 frames of the movie look alike. The landscapes are neither post-card pretty, nor are they familiar or predictable, but they haunt you for a while after the movie is over. The edgy, gritty feel of the movie is enhanced by the production design. There is sense of the surreal at times, especially in the scenes at the abandoned amusement/fairy-tale park.

Hanna is a simple story of personal vendetta, and there are no layers or surprises to make the movie more complicated than it actually is. This treatment works in its favour. The only element missing is connectivity. You just cannot feel for the characters, and their actions seem unnecessary at times.

And unless Joe Wright quickly directs another movie along the lines of Atonement, Hanna will become the movie that defines him as an action director.
Share. Save. Connect.
Tweet
HANNA SNAPSHOT

ADVERTISEMENT
This page was tagged for
Hanna english movie
Hanna reviews
release date
Saoirse Ronan, Eric Bana
theatres list
Follow @fullhyderabad
Follow fullhyd.com on
About Hyderabad
The Hyderabad Community
Improve fullhyd.com
More
Our Other Local Guides
Our other sites
© Copyright 1999-2009 LRR Technologies (Hyderabad), Pvt Ltd. All rights reserved. fullhyd, fullhyderabad, Welcome To The Neighbourhood are trademarks of LRR Technologies (Hyderabad) Pvt Ltd. The textual, graphic, audio and audiovisual material in this site is protected by copyright law. You may not copy, distribute, or use this material except as necessary for your personal, non-commercial use. Any trademarks are the properties of their respective owners. More on Hyderabad, India. Jobs in Hyderabad.