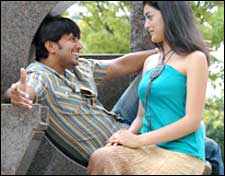 Priyanka Pulla / fullhyd.com
EDITOR RATING
6.0
Performances
Script
Music/Soundtrack
Visuals
NA
NA
NA
NA
Suggestions
Can watch again
NA
Good for kids
NA
Good for dates
NA
Wait for OTT
NA
Is it the soulful music score? Is it Parvati Melton’s hypnotic eyes? Is it that much-milked story of Indian students living abroad, now packaged more commercially than its predecessors? Or is it the promise of another fine performance by Raja of Anand? What sends the crowds thronging like garter snakes in a pit, to the first day’s screening of Vennella?

Whatever it is, Vennella insidiously, and rather sneakily, disappoints in a rather vague and amorphous way, while keeping intact an outer carapace of winning elements. You don’t know what you are cribbing about when you leave in the end. It’s like the classic tale of that lightning slap where you don’t know what hit you and how many times. Vennella is slick, has great music, great cast, decent if slapstick comedy, but the one overriding element that holds it all together – the story – betrays.

Vennella is set in the USA – a winning milieu of a group of Indian boys and girls pursuing their Masters’ courses in Wayne State University. Which true-blue Hyderabadi wouldn’t relate to, or at least want to know of, the experiences of Gulti engineers and their exodus to the USA? It is the story of our times; these are events that define us. On that count, Vennella picks up its first brownie point.

Pavani (Parvati Melton), of heavily kohled eyes and a designer figure, is studying along with Naveen (Raja) and a group of friends in the USA. Halcyon is how the boys’ life can be described, what with plenty of well-endowed, ready and easy American women around, lots of parties and outdoor picnics. To provide food for the gravy-dreams of the male viewers in the audience, the American women are uniformly prosthetic-enhanced, noodle-clad, and fanatic proponents of Oshoism in matters of you-know-what.

The only splinter in the curry is Sayeed (Ravi Verma), who has followed Pavani all the way from India. Not quite as a stalker, but just a menace to have around. Pavani’s ex-boyfriend is Ritesh (Sarvanand), whom she was forced to dump because of his “bad habits”. Namely, gutkha, fagging, boozing, and bashing up opponents in the college elections.

Ritesh, who is madly in love with her, turns Devdas and follows her abroad, while Sayeed is already making life hell for her. The connection between Pavani and Sayeed is that he always had a soft spot for her, and was the one to introduce Ritesh to the seven. Deadly sins, that is.

Once Ritesh lands in the USA, all hell breaks loose, as he becomes a stalker full-time. He starts drugs and threatens suicide and murder, which pushes the immaculate Pavani further away.

The mood that the fantastic music by Mahesh Shankar (it has a fresh, limpid feel) and all the scenes of fun and games among the university students, sets, is completely compromised with the ending that can only be termed as weird. One wonders why the movie does such an unanticipated turn-around. From happy-go-lucky to melodramatic, from slapstick to morose.

It is a bigger mystery considering how well the first part was pulled off. You are just beginning to think what a bracing new concept the story is when *PHUT *- up it goes in a bang. It’s almost like the first half turned out that good by accident. There is no other way Deva Katta failed so drastically in keeping it up.

But for sheer lack of other contenders from Tollywood currently releasing in theaters in Hyderabad, this one might just turn out to be a finisher in the race. You may watch it, too, and be entertained to a reasonable extent by the tomfoolery of the characters in the first half, the dewy new music and some fine performances by the actors. Back here, we will refrain from stamping Vennella all across with any one epithet. This one is dangerous territory, the fate of which is as whimsical as Indian monsoons. So check it out and decide. As for the title, we have given up trying to figure that part out long ago.
Share. Save. Connect.
Tweet
VENNELA SNAPSHOT

ADVERTISEMENT
This page was tagged for
vennela movie rating
andhra hoomi sunday 3.3.19 vennela
Vennela telugu movie
Vennela reviews
release date
Follow @fullhyderabad
Follow fullhyd.com on
About Hyderabad
The Hyderabad Community
Improve fullhyd.com
More
Our Other Local Guides
Our other sites
© Copyright 1999-2009 LRR Technologies (Hyderabad), Pvt Ltd. All rights reserved. fullhyd, fullhyderabad, Welcome To The Neighbourhood are trademarks of LRR Technologies (Hyderabad) Pvt Ltd. The textual, graphic, audio and audiovisual material in this site is protected by copyright law. You may not copy, distribute, or use this material except as necessary for your personal, non-commercial use. Any trademarks are the properties of their respective owners. More on Hyderabad, India. Jobs in Hyderabad.