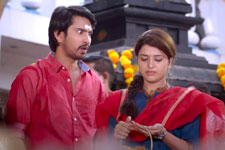 More specifically, you get the sense that you've seen his character Vishnu somewhere, and that's when it strikes you that Raj Tarun as Vishnu in this movie was Raj Tarun as Suri in Uyyala Jampala, Raj Tarun as Kaththi in Cinema Choopistha Mava, Raj Tarun as Kittu in Kittu Unnadu Jagratha... basically, Raj Tarun in just about every other movie he's acted in so far. And while that may have worked in maybe his first 2-3 movies, by the time you get to his nth movie with the same gig, which Rangula Ratnam is, the ploy starts to seem like a rinse-repeat-wash, and you settle down into the movie with perfect knowledge of what will happen when and exactly how things will wrap up.

So the story starts out with Vishnu (Tarun) who owns a greeting card company called Emotions. That in itself ought to give you enough insight into what is to come in this film, but more on that in just a bit. Vishnu is doted on by his mother (a strong performance by Sithara), who raises him to be a strong, independent man minus the excessive coddling that we've come to associate with mothers and Telugu cinema.

Vishnu falls in love with Keerthi (Chitra Shukla), a strong, over-protective, over-indulgent GF-that-basically-mothers-you-around type who returns his affections. But while our man exhibits signs of an Oedipus complex initially, he soon comes to realize, and so do we, that he's bitten off more than he can chew with Keerthi and her constant domineering, and starts to resent her over time. How the two part ways, struggle with their loss, and eventually gain good sense and get back together is what the movie is all about.

Rangula Ratnam is a clean family entertainer that's been released keeping the extended Sankranti weekend in mind. While it has nothing to write home about, it keeps you engaged in bursts and provides decent entertainment for a family outing. The performances are alright for what is a strictly average script with Priyadarshi rescuing the story from certain death with his comic timing. A certain director we all know once spoke about the need for separate comedic tracks in Telugu movies being necessary in case the movie itself wasn't that great, or got too monotonous, and Priyadarshi, to his credit, proves just how right the filmmaker was.

Rangula Ratnam is director Sree Ranjani's debut movie, and her inexperience does show through occasionally. The script, as mentioned earlier, offers nothing new, but to her credit she milks it for all it's worth to get you and the family moist-eyed several times, especially with the mother-son track that takes up all of the first half. The cinematography and visuals of the places the characters inhabit are strictly average which, though understandable, is surprising since Annapurna Studios is the producer of the movie. You'd have thought that Akkineni & co would polish the end product a little more maybe, but perhaps they, too, knew which way this movie was headed, and chose not to go all out.

The music by Sricharan Pakala is middling, too, with some songs better than the rest, but again, it's nothing you'd remember in the long run. Pakala does do a better job with the background score, though, keeping the proceedings smooth and breezy. The editing could've been tighter, more so in the second half where you're dealing with the conflict, and by which time the audience is starting to fidget under the combined load of all that sentimentality from the first, and now the second, half.

All in all, this one is a tolerable family outing, especially with both the highly anticipated releases of the weekend bombing.
Share. Save. Connect.
Tweet
RANGULA RAATNAM SNAPSHOT 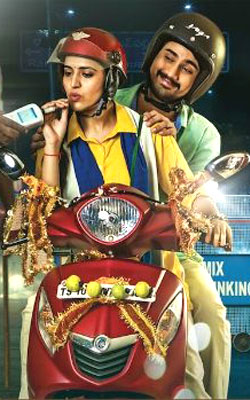 ADVERTISEMENT
This page was tagged for
Rangula Raatnam telugu movie
Rangula Raatnam reviews
release date
Raj Tarun, Chitra Shukla
theatres list
Follow @fullhyderabad
Follow fullhyd.com on
About Hyderabad
The Hyderabad Community
Improve fullhyd.com
More
Our Other Local Guides
Our other sites
© Copyright 1999-2009 LRR Technologies (Hyderabad), Pvt Ltd. All rights reserved. fullhyd, fullhyderabad, Welcome To The Neighbourhood are trademarks of LRR Technologies (Hyderabad) Pvt Ltd. The textual, graphic, audio and audiovisual material in this site is protected by copyright law. You may not copy, distribute, or use this material except as necessary for your personal, non-commercial use. Any trademarks are the properties of their respective owners. More on Hyderabad, India. Jobs in Hyderabad.